Iranian forces have deployed a signal intelligence system along Syria’s border with Jordan, Nabaa, a Daraa based news outlet, reported on January 15.

Sources familiar with the situation told Nabaa that the system was moved from the district of Sajjnah in Daraa city, where it was originally installed, to a base in the town of Khrab al-Shahm. The town is located near the border line with Jordan.

A second “spying device” was reportedly installed by Iranian forces in a valley located between Khrab al-Shahm and the area of al-Thu’ailah.

Iranian forces may be planning to use the systems to tap on the communication of US forces in Joran, or even to spy on Israel to the west.

In the last few years, the Israeli Defense Forces targeted and destroyed many observation posts and spying equipment which were set up in Daraa and al-Quneitra by the Syrian Arab Army and Iranian forces.

The information revealed by Nabaa is yet to be verified. The deployment of spying equipment by Iran in southern Syria will for sure lead to more tensions with both Jordan and Israel.

Those are 5G antenas meant to convert Jordanians to Shia

those hasbara idiots on this page would say that hahaha

You’re another idiot that belongs on my block list.

At this rate you’ll see no comments. I dont think you want to live in an echo chamber of your own opinions. Maybe you do.

Wasting time on the following idiots means less time readingvother, better posters who actually bring something to the table.

Frankly, you are the dumbest shithead here.

Are you talking to yourself, Franky?

Just Me
Reply to  occupybacon

You got owned pal LOL

I’m one man army, noob. I don’t lol on my own comments.

excellent as long the purpose is to turn tel aviv into a cloud of dust and the jews in palestine in a quickquick retreat to nowhere. we, the world, don’t need the jews and thus all efforts of the world must be to send them packing – lets see if the dumbnuts in the disunited states of exceptional morons, aka usa, would give some comfort to the evicted scum!

Whats the point if Israhell will just destroy it in the future ?

Iran should next place a Satellite in Geostationary Orbit above the ZioNAZI shithole of IsraHELL.

yes, right on top of tel aviv with a clear view of prime scum netantahu, soon to be netanyahu lackland but at that time he will be watching the world from a pike or netanyahu shortofbody!

They must be seeing a return on investment israel is not seeing.
This is an indication the IAF strikes have not been as effective as portrayed in the media.

exactly this is why “300 Israeli strikes” were not effective in the last 8 years, according to their own General

Just Me
Reply to  Emad Irani

They have provided Iran with a great deal of intellience of Zionist weaponry and pathetic tactics, Iran has reversed engineered SPICE, SPIKE, POPEYE, HAROP, HARPY 2 etc to say the least.

And you are naive or stupid enough to believe Zionist propaganda. They’re scared shitless and are to be hit soon.

Fog of War
Reply to  Frank

Condor
Reply to  Fog of War

Israel’s claims have as much merit as Baghdad Bob had. By their nonsensical propaganda half the Iranian military is in Syria and has been destroyed.

they did exactly what we expected them to do

Good question. For all we know it’s some telephone poles with a few old TV antennas attached … could be a n Iranian solar clothes dryer. Dont be surprised to hear that the Israeli’s killed hundreds of Iranians in an air strike the proof being all the socks and undies littering the site.

I’m a big fan of the solar clothes dryer theory.

In which case the worst the IRGC suffer is a laundry crisis.

This is an indication that the israeli airstrikes have not been effective over the past decade.

If Iran is still putting up expensive equipment their calculations must show that the payoff is worth it.

but, but, BUTT, wasn’t the might mouse child killer IDF supposed to have chased Iran out of Syria and even Iran itself? I am confused.

You are right of course. Actually, from a strategic and military point of view, these impotent Zionist propaganda strikes have been an intelligence bonanza for Iran and they have upgraded and reverse engineered every captured Zionist weapon system. The Zionists have exposed themselves as very incompetent and weak. I am certain that Iran will hit them hard and quite soon. 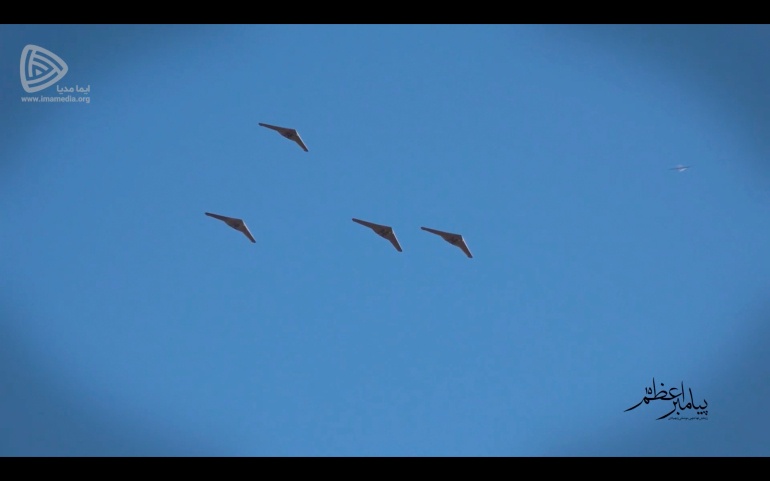 Iranian Ra’ad 85 loitering munition drones reportedly have an operational range of around 100 miles and reportedly can reach a top speed of about 250 mph, considered the fastest and most lethal in the region head to their targets.

drones with this nano monocrystal blades technology are irans top of the line and they are basically something iran still doesnt mass produce in 100s or 1000s because its so high tech in production process only a hand full of countries have the tech capability to produce it
https://twitter.com/i/web/status/1327994830442680320

The launching drone was a Karrar, a heavy payload Iranian drone is a game changer in UAV offensive role. The Iranians
reverse-engineered shot down US drones, with a few modifications, to

in 2010. The jet-powered Karrar has a speed of over 500 mph, and has
been modified from the target role to be a bomber, carrying a pair of
250-pound anti-ship missiles, a 500-pound GPS-guided bomb, or a small
cruise missile. 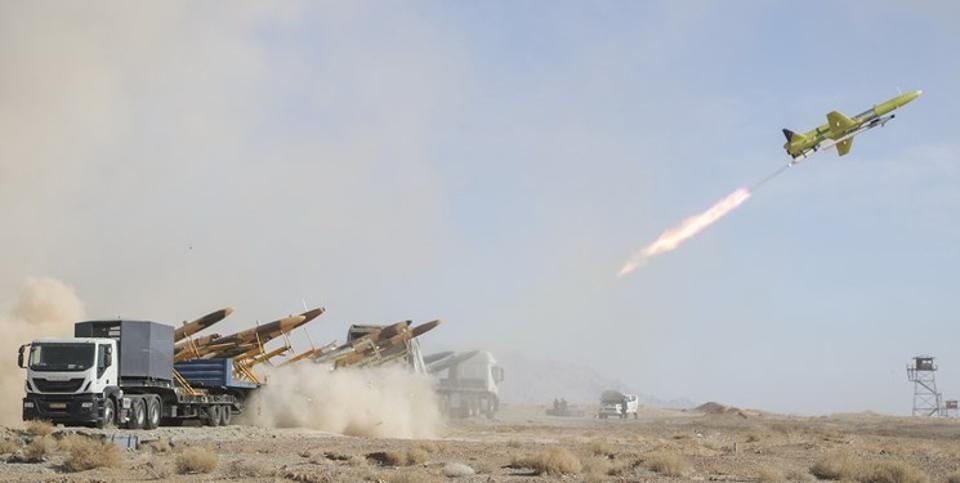 That illustrative image is unrealistic,misleading there is no way İran can replace such a ”giant” static system in that area.İt must/should be mobile truck etc or underground system in which antenna/seeker above the ground to avoid tracking of İsraels unit 9900 specialists.

no,badly chosen image..there are much more small systems, besides all satellite systems are tracking,monitoring movements of that area.İranians are also not stupid to replace even a giant decoy..sorry but ı dont buy it.

That is a logical deduction. Iranians have proven very canny and capable.

Well, you could be right that it’s the *wrong* image of the decoy.

In which case it’s a bad image of a big decoy anyway.

In either case, it has been announced to the whole world so it’s most certainly a decoy.

Which means that the precise image is still visible enough to lure the IAF out.

why would we put a decoy on jordan?

why would we place a decoy there?

Think about the question you just asked. Think long and carefully …

Troll the Jews, not the non-jews.
jens holm would like a conversation with you …

this is more about jordan and the jordan palestinian border

A futile attempt to demonstrate power. Installing intelligence equipment thousands of miles away on foreign soil, while you cannot defend your own interests at home. We’ve seen massive color revolutions in Iran instigated by the U.S intelligence community. High profile assassination of shadowy leaders and commanders. Sabotage bombings of sensitive sites. All this happened right under the noses of Iran’s intelligence community.
Iran is better off installing this system at home and monitoring communications of dissents, lest another instigated revolution catch them off guard.
In the meantime, those installations are not important targets, otherwise Israel would have bombed it.

but, but, BUTT, you said that US was going to “attack” Iran and your Zionist masters were so powerful LOL

They are attacking Iran already, only not at the level of intensity that would bring down the regime.
Don’t celebrate yet that your losses stops with the few assassinations. Biden is no Iran dove. He’ll deploy more U.S forces in Iraq, and maybe Afghanistan. If you attack U.S forces in Iraq even under Biden, hundreds or thousands of your militias are gonna die. that would also include IRGC commanders on the ground in Iraq.
Biden only promised to uphold the nuclear. That does not mean he’ll tolerate Iran’s destabilizing activities.

When did I put a date or time for a U.S attack on Iran?
I still have no doubt that they will attack Iran some day. Enmity has only grown between the two countries since 1979. It reached a whole new level with America’s open elimination of Iranian military leaders in Ira and Syria, something that never happened in the past.
Knowing the behavior of Shiites, I know neither side would back down. That’s why a war is certain. In 2020, the U.S and Iran came within inches of a big destructive war. But Iran stood down, so it didn’t happen.

try to use nukes which are blowing up all around you

you jews wasted so much money and ressources dont you feel stupid by now?

That would be good they can listen in and see when israel attacks or US/daesh attacks come from al tanf, and when they foil all of them, it forces them to come out from hiding

“Sources familiar with the situation told Nabaa that the system was moved from the district of Sajjnah in Daraa city, where it was originally installed, to a base in the town of Khrab al-Shahm. The town is located near the border line with Jordan”.

Will that make them safer, probably not.