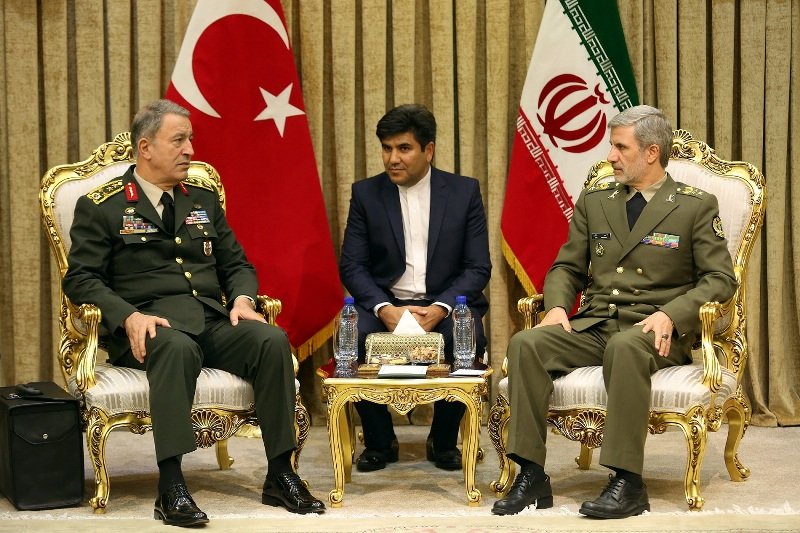 Iranian Defense Minister Amir Hatami said on Tuesday that Iran and Turkey, as two influential countries in the Mideast region, will stop new scenario of the Zionist regime of Israel.

“The U.S. and Israel have put strategy of disintegrating the regional countries on agenda after failure of Daesh scenario, but Iran and Turkey, as two important and influential regional countries, will not let them enact the new scenario,” he said during a meeting with Turkish Chief of General Staff Hulusi Akar in Tehran.

Hatami noted, “Developments in the region during the past years have served the interests of the Zionist regime and harmed the world of Islam and have marginalized the issue of Palestine.”

“Cooperation among Iran, Turkey and Iraq can be effective and helpful in establishing stability and security in the region and countering division seeking actions,” he added.

He also said that Turkey supports territorial integrity of Iraq and Syria and is against any move to change borders.

Kurds are starting to smell the fruits of evil seeds that their “new friend” Israel planted in their minds. Unfortunately for them that smell is not to their liking.

The smell of fish….are always fishy.

Russia / Russian companies are the largest foreign investors in the Kurdish region of Iraq in 2016. Iran and Turkey will do nothing without Russian approval. The Turks didn’t even stop the export of Kurdish oil.

Because of the legitimate nature of countries such as Turkey and Iraq and Iran, if they put the call out for thousands of volunteer fighters from around the world to come and join there cause fighting against the Communist-Kurd’s, I know many tens of thousands would join. Thousands of American Patriots would answer the call to fly to Turkey if Turkey would state openly that they would train the volunteer force, and provide international legal cover protection for the act. Even in the USA many Kurdish movements are rated as Terrorist, and thus people should flock to defeat these Zio-Communist. http://ihr.org/

How can you possibly “know many tens of thousands would join”? Moreover you don’t sound particularly “anti-racist”.

There would be a great many , not all the people believe the new image created in the past decades the US policy wonks have been stepping up the indoctrination in regards that the Kurds are freedom fighters and the underdog. There has been a lot of manipulations going on recently with referendums, Catalonia had less than 43% voter turnout , what do you think of the other nearly 60% will say. The Kurdish referendum in Iraq had massive voter fraud even shown by multiple people of the elections staff involved in the voter fraud, why do you think the US and others doesn’t support it.

1. Not supporting something differs complitley from militarly fighting it (Regardless what the actual support for an independent Kurdistan is among Americans and irespective of the reliability of the recent vote, one can’t know tens of thousand i a lifetime) 2. Although the US publicly does not support the independence of Kurdistan, they practically do the opposite. The reason behind publicly deny its support, does not necessarily depend on the validity of the recent referendum. Neither does it have anything to do with popular support among the population. It is solely based on selfish perceived benefits among the leaders at the top in US. I would guess they do not want to annoy every countries in that area at the same time…

The US only plays this region here because it is a lynch pin in the economic trade belt once established will supplant the US trade Empire. Think of it as the American East Indies trading Company, they are just a Global power through trade and any future countries that would try to supplant it need to be put under control before they grow to wealthy. The US has went to great lengths to disrupt certain lynch pin countries in maintaining it’s dominance in the world. They will make all these lynch pin countries their protectorates or defacto protectorates,and still maintain a trade monopoly.

The US is hitting points on the globe that are in positions of strategic value and causing all this chaos to disrupt the flow of trade. You do notice all the worlds economy is suffering as the US is a military manufacturer and they are profiting, except for the little peons in the US.

President Assad has also voiced the same speech, because regional integrity is the key to being successful , look what happened to the former Yugoslavia once an economic belt of Europe now a smouldering ruin of destroyed industries filled with regional corrupt govts and drugs human trafficking etc., that’s no future for any country or countries to be as an independent Kurdistan would be. Just look at what happened to Kosovo and Bosnia all the worst drug infested communities in Europe and all US protectorates seem to share this fate.

Kurds are NOT Communist! Can you people stop this nonsense and get your facts right! Geez. The same thing over and over, especially when they even said it! Do your research and stop misinforming. SouthFront should do a Documentary on this and educate some of you users who keep on going with this nonsense and I BET don’t know anything about Communism.

Iranian officials times and times said that Iran supports integrity of regional (and all) countries, times and times invited all parties in any crisis to dialogue and diplomacy instead of hostility and numerous times said Iran’s military capability is just defensive and Iran will not attack anywhere if not attacked, just retaliation. Iran’s actions also prove that it’s not a hostile country as it didn’t attack anywhere for a few centuries, directly or indirectly.

We have another country which takes side loudly in any crisis, not only threats other countries to attack (even nuclear) but actually does so, uses threat of economic sanctions as a means for it’s policies and does so to force other countries to comply. During it’s short history it attacked a lot of countries, which included the murder of civilians. When it doesn’t attack somewhere directly, it creates terror groups to do it’s bid.

Now the latter accuses the former of aggression!

KRG is learning fast too: They accused Iran of escalates the situation dangerously, because Iran wants to maintain it’s own and it’s neighbours’ territorial integrity. How dare Iran!

My first image/s that popped up in my head, was of what I tell my two cats, if you dont behave, I use both heads to bang each others with, enthusiastically, until I am holy connived about the new born sanity and light, is kicking in to their minds again. Like this: WHY did You Not,… bang, bang…., Do this, …..bang, bang…., BEFORE. Bang… huh Bang…bang.

But, as an gentleman, I hope they have learned something, thru the years, eventually, you have your neighbors, Iran have been rock steady, Syria have been rock steady, thru it all,and the so called sectarian wedge driving contest, in Iraq and among others, are just more of the same, this days must end, and bring back some fresh hope, we need that, and now, realized you have the same problem, and despite the above mentioned flash, its a good thing, we lack good things, this is one.

Iran and Turkey are two countries whose bark is much stronger than their bite. I hope that the Iraqis (Kurds, Shiites, Sunnis and others) will solve their problems without internal violence.