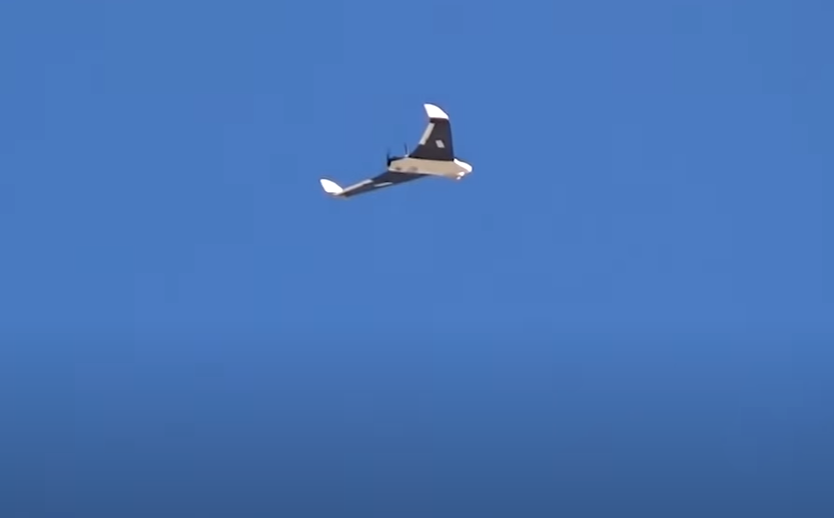 The drones were launched from farmlands located in the outskirts of the town of al-Mayadin in the southern Deir Ezzor countryside. The drones flew over al-Rahbah citadel in al-Mayadin, where Iranian-backed forces allegedly store their weapons and ammunition.

According to the SOHR, the drones were launched as a part of a training course being held by the Iranian Islamic Revolutionary Guard Corps (IRGC).

As a part of the training course, Iranian officers are training some 25 pro-government fighters on the use of drones. The course began in the first week of October.

The SOHR didn’t provide any information on the type of the drones, which may very much be small fixed-wing or quadcopters drones.

Iranian-backed forces have been operating drones over Deir Ezzor for several years now. On August 21, a US fighter jet shot down an Iranian drone that approached a US base in the al-Omar oil fields in the eastern countryside of Deir Ezzor, which is held by the US-backed Syrian Democratic Forces.

Very recently, the US sanctioned a network of individuals and companies for supporting Iran’s drone program. Iranian forces were blamed for the October 20 attack on the US al-Tanf garrison in southeastern Syria. Five suicide drones targeted the garrison during the attack. The drones were launched from Syria and Iraq.

Turkish and Iranian drones are a threat!

Calm down you bloated fool. Clean the chips off your T-shirt before you soil your idf issued adult diapers. Stupid turd.

You don’t make sense at all. Your reasons are completely out of touch and you are even anonymous.

Icarus Tanovic gets his news from P0rnhub gay version.

Quite degenerate, adults are commenting.

Some of the malfunctions is named “Block” or Blup.

Aslong as he payes You thats legal. Remember tax.

SOHR is not one person but a mainly very reliable source as hob for many rapporters in mainly Syria. Most comments from there can be verified as well.

Hardly none of Yours can. Mainly You not even write comments and is no learner as well.

Sohr is regularly used by RT,

Again, quoting the SOHR for info delegitimizes whatever credibiltiy and professionalism you are trying to establish. You could cite Disney sources and sound more credible. How about ANNA News who have actual combat journalists on the ground???????

It’s not only SF, RT too is regularly using SOHR,

The mullahs will fall sooner or later, we will make sure of that. Now, they can either step down peacefully and avoid a war with us, or go on with their nuclear program – in that case they risk not only themselves but the entire future of the Iranian people.

They should go on with the first option, because so help them God we will unleash all of our arsenal at them if it comes to that. We do not avoid a war when our existence is at risk, they should keep that in mind.

They are going to fall this year for sure, innit? :)) Are you coming to celebrate this year in Tehran too? Boo, bo hena. Bo lakhgog! Hav-va, na-gee-la!

Pity if you don’t, you’ll love it here! A lot of Kaleemis are coming too. Anyway even if you don’t come, I’ll be over there again soon. Maybe finally I’ll be lucky enough to meet my friend?

Garga! It’s been a while my friend, how have you been? hope all is good :) I would also prefer celebrating the Holidays, let it be Jewish, Christian or Islamic ones. Sadly, the way it’s going now there are winds of war and I don’t see how we can avoid it. Someone has to back down, Iran or Israel. But that ain’t going to happen. Israel can not live with an Islamic regime that can push the button anytime it wants, hope you get our side. So, when do you come over here? :)

You getting paranoid again? Nothing is happening, yet here you are tripping again?

Not again this stupid fake account. I will just say something in Hebrew if anyone wants proof that I’m the real Iron_Zion Moron :-)

Think you can get with this away mother F?

Nice try faker, but you don’t even know one word in Hebrew so how are you going to talk to Gagra? to prove it’s me, I’ll answer to Garga in Hebrew: Ani avo lahgog itha yom ehad, hakol tov haver :)

it’s kinda sad SF ruined it when they canceled the disqus comments, now evert putz like you can claim to be me. You will never be an Israeili, it takes courage to be one something you’ll never have. So by all means keep pretending to be me, that’s all a loser like yo ucan do anyway.

To Ahson, nothing is happening? so why do you keep the inspectors away from entering? what do you hide? as for Israel, everyone knows we only make peanuts in Dimona :)

Why would I learn shitbrew? You are a horseheaded inbred imposter. khazarian trash. Go back to poland or wherever you pigs came from.

You loser don’t even know how to use Hebrew script and you spelled Israeli wrong. Do you think we are all idiots and don’t notice this?

To be an Israeli is not about courage, it takes an utter lack of conscience and understanding that the means justify the ends. Thats why we will F you up.

Park your shitbrew up your arse fool. You are a horseheaded freak inbred. Go back to poland, khazarian turd.

Actually, block reminds me when I was 20.

This is Icarus Tanovic. You are talking to Icarus the parasite, Garga.

Thank you for the warning but Icarus is a friend and won’t do something like that.

That comment wasn’t made by me. Where is Disqus? Now everybody is impersonating!

In that case go to gravatar dot com and choose an avatar for your email. It’ll stick to your email and it will be easier to know who is who. To say more precisely, it will be harder for impersonator to just change a name. They have to make a lot of emails, steal our gravatars and each time remember to enter the correct one.

My real name is Christos Kogkas and I am from Thessaloniki. I am 27 years old.

That would explain why you are total clown faggot. A child commenting on global events like iron_diaperlover.

Nice. I’m afraid “Garga” has to suffice for now.

That celebration is not exactly a holiday, more like a Dr. Parnassus imaginarium, complete with Bolton and Mm Radjavi!!!

I’m fine, thank you. How have you been? I see you are more aggressive than usual. Everything fine at home? I hope you remembered to buy flowers and do small chores which makes one’s spouse happy.

I’m not sure exactly when I’ll be close by but I’m planning. As you can imagine it depends on a lot of variables. Seems it’s boiling over there, maybe I can cool things off a little bit for yous with my shiny and warm presence? Oh, avoiding war is not that difficult, as you know everything has a price tag and some of us know how to make things too expensive to be attractive. We won’t let a war to happen, not yet. For now you can just do what I do: sleep like a baby!

Gerga, first that is probably Icarus or some other guy pretending to be me. So take every comment here with cautious.

Second, that is a real messy situation for both our countries. Not you and not me are calling the shots, but it affects us directly. I think I’ve become more aggressive lately due to personal issues, so sorry if my comments seem a bit harsh. You know, the economy and the covid and everything around it.

But tell me, what else can stop the collision course? You got Raisi, we got Bennet. Both leaders are men of business, no one will give up so yeah…that is where we stand. I think Israelis and Iranians could be good friends, why the hostilities? because your regime is fighting to save the “poor palestinians”? why do Iranians even care about them? live your own lives peacefully, why do you have to threaten our small country with destruction? what good comes out of it? i don’t blame you ofcourse, but your regime.

I don’t know how it ends Garga, but from the bottom of my heart – I hope everyone you love will be safe and sound. The Iranian people have never been my enemy.

This is Chris Gr, Icarus Tanovic is a very insane and psycho person. He even admits it!

Don’t worry, I might be able to recognize your writing style. Sorry to hear that, I hope everything turns to be well in your personal life. I’d be happy to help in any way I can.

I don’t think that we are currently on a collision course, don’t pay much attention to the hot air and talk of war from your regime. Whenever we feel it’s serious we know how to “cool it off” as we did a few times so far. Let’s not get into a heated ideological discussion about wrong and right and what “wiping off the pages of time” means (it doesn’t mean destruction, if you listened to me and learnt Persian it became cleared for you a long time ago!).

Raisi is a very pragmatic man and nothing like the fanatic he is presented to be. He doesn’t talk much and just does what is needed to be done so he has no time for hubris. Did you hear anything from him -a direct quote and not interpretation of intention- that points to war? I haven’t. Even the ones who are mis-quoted regularly say something like “we’ll do this if X does that”, meaning if X doesn’t do this nothing will happen. In addition to that in our side, things like war aren’t decided by one man but a council of very wise people. Such things are decided purely by our national interests and future and not by ideology. But in case we are being attacked we have to respond and we have to respond with everything in our disposal in a manner that prevents any further attacks. That’s why we prefer to make sure we are not being attacked (price tag or a hint of rising it is but one of many ways we may achieve it). It’s amazing how they managed to distract you (the population) from the real things with imaginary threats or by creating one out of nothing. If you look closely the only threat to you is what your regime does because every action warrants a reaction. A subtle hint says if someone isn’t afraid to react to Americans, chances are that they aren’t afraid of you either so how about not poking them for once and then cry that this guy wants to hit me? Food for thought.

Bro I would give you my Facebook but it was hacked.

Bro, you are not evil like some other dudes there but why do you act so strange? I don’t get it.

Ow, it came out much creepier than I intended. Thank you for the Facebook offer. Maybe when your account is not hacked anymore and I created a personal one?

Yes I need to unhack it!

Basement shitbag. Go be stupid at cnn or bbc sites. People are tired of your zio-idiocy. 9/11 was actually 119 you cabalistic freak.

9/11 was an inside job. I agree but I don’t care about your demented aggression.

What imbecile uses shitbook? How stupid can you be?

In order to talk to friends. Stop provoking me all the time and make some reasons for yourself.