The US continues with its efforts to ratchet up its long running campaign of financial sanctions and economic blockade against Venezuela, with the objective of either forcing President Nicolas Maduro to resign and turn power over to a transitional ‘government’ acceptable to the US, or persuading his colleagues (and senior military officials in particular) to abandon the president and agree to a transitional power-sharing agreement. If this cannot be achieved the US seems determined to devastate the South American country’s economy to such an extent that it becomes ungovernable.

As the US runs out of additional targets within Venezuela that it can add to its campaign of financial and economic pressure, last week a senior official in the Trump administration told Reuters News Agency that the US was considering measures it could take in response to reports of a fuel shipment from Iran to Venezuela. Both Iran and Venezuela are subject to extensive unilateral US sanctions. The Trump administration official declined to specify the measures being weighed, but said options would be presented to Trump.

According to the media reports, the Iran-flagged vessel ‘Clavel’ passed the Suez Canal on Wednesday after loading fuel at Iran’s Bandar Abbas port in late March. As subsequently reported by Al Jazeera, an Iranian news agency declared on Saturday that there would be repercussions if the United States attempted to intercept the Iranian fuel shipment.

Iran’s Nour news agency reported that: “News received from informed sources indicate that the US Navy has sent four warships and a Boeing P-8 Poseidon from the VP-26 squadron to the Caribbean region.” The agency further declared:

“If the United States, just like pirates, intends to create insecurity on international waterways, it would be taking a dangerous risk, and that will certainly not go without repercussion.”

Separately, an Iranian analyst suggested Tehran may retaliate against US vessels in the Gulf if the US takes action against the Iranian vessel, noting that.

“The US Navy and its allies in the Persian Gulf are hostages to any kind of violation against Iran’s legal international shipping,” Mahdi Mohammadi said on Twitter.

The US threats follow increased pressure in April on the Western energy giants that still operate in Venezuela, forcing them to further reduce their activities under waiver agreements previously agreed with the US Treasury Department.  Chevron had been exempted from the US oil sanctions imposed in January 2019 so that it could continue operations in Venezuela and export crude shipments from its joint ventures. The exemption was renewed until 1 December after the previous one expired in April, along with the exemptions granted to US servicing companies Halliburton, Schlumberger, Baker Hughes and Weatherford. However, the renewed authorizations include a prohibition on drilling, lifting, purchasing or processing Venezuelan-origin crude or oil products. The US companies’ activities are now strictly limited to maintenance of essential operations and contracts.

Thus developments continue to follow the script laid out by the US Southern Command’s strategic document ‘Master Stroke – Plan to overthrow the Venezuelan dictatorship’, leaked by the press 2 years ago (first reported by Stella Calloni at Voltaire Network).

The latest measures come several weeks after the US offered a reward of $15 million for Maduro’s capture, presumably a motivating factor behind the recent failed incursion attempt by mercenaries from Colombia. The provocative US actions and their readiness to flagrantly violate international laws and norms make a reduction in tensions in both regions extremely unlikely, as is apparent from the Iranian leader’s latest statement earlier today that it is inevitable that the US will be forced to retreat from Syria and Iraq if they do not leave voluntarily.

Really!?
Reply to  klove and light

FOX will report this as … ‘Iran threatens to attack the U.S.’

It doesn’t even occur to the Exceptionalists that stopping international commerce is an act of war as long as you don’t like someone and you are the United States it is by definition lawful and the victims are aggressors. Is this how we will stumble into a moronic war, at some point Iran will have no choice.

What frightens the US-led Zioterrorist scum the most is the possibility of a tech transfer for Venezuela to open new refineries with the collaboration of Iran, Russia or China.

Vertical integration.. don’t depend on others. Venezuela (and even Russia) need industries that work from extracting raw materials like crude oil, to selling consumer goods like petrol. If Venezuela can crawl through this forced upon shithole, they will come out strong – with complete industry.

Sure it can still all be bombed of course, but there is less access to ‘build a case’ to bomb them, like the US is building now with chocking off the Venezuelan economy.

If the US terror force attempts to hijack and steal Iran’s shipments, first they’ll perform a false-flag attack on a couple of ships near Iran, probably in the Oman sea or Indian ocean (preferably in UAE waters which is fully in bed with crazies) to have an excuse to “punish”.

No false-flag, no cargo theft.

Maybe it’s time for another cruise missile attack by the Houthis. Doesn’t the UAE have a big refinery and export terminal in Al Ruwais? It would be a shame if something bad happened to it… 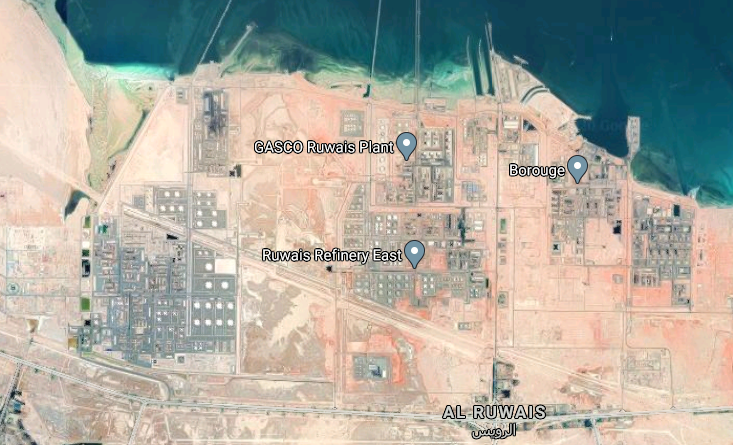 Next US strike should be on ayatullah in tehran :D

Say that to me when ayatoilet dies in an israeli/us strike :DJust like how that bastard soleimani was killed :D

why iran did not send escorts with these tankers?

Iran doesn’t have a blue water navy. They might be able to have a dozen IRGC soldiers below deck and they would be quite the challenge for a helicopter filled w/troopers of any country.

These are civilians tankers and under maritime law have the right of free passage anywhere. US is acting like a pirate and threatening to hijack oil tankers in high seas,the only difference between US or Somali pirates is that they don’t have aircraft carriers.

Israel should also intercept and capture any Iranian ship that is crossing the Suez canal, free oil for us.

So-called Israel will cease to exist then little chit of a child.

No we won’t, they can’t do shit to our navy in the East Med. Like I said, free oil for us. Hope Gantz orders it.

You are a silly chit of boy and spend too much time trolling adults.

But why don’t you comment to my fact? if we do captrue it, what can they do? nothing. 20M barrels oil tanker, now that is something worth capturing.

You can not even fight Hezbollah, let alone Iran which will destroy your cities if you commit piracy in the high seas. Children should not fantasize about fanning conflict. Real people get hurt as the US is finding out. Now go play with other violent children. Run along little boy, I have given you your 15 seconds of much coveted attention you so desperately crave :)

You know I’m right Ashok, you’re just scared to admit it and it’s fine man I get you. When a war comes with Hezbollah, do you think we would give a shit about doing actions against Iran? we will just capture every Iranian oil or weapon ship they try to transfer into the mediterranean sea, where we have the advantage. Now go and search for a clean water in Islamabad, maybe you can find a well.

LOL, ignorant Jew cunt, New Delhi is the capital of India, not Islamabad. What a bunch of ignorant hasbara cunts who are desperate :)

Incinerate Haifa thats what they can do.

They can dare to try, will be nothing left of Tehran.

So you want Israel to be in the piracy business now. I suppose when you are used to stealing land a ship is no different.

Why not? it’s a hostile ship anyway that sponsors terror all over the world.

nah israel needs to be razed to the ground and each ánd every jew buried 6 feet under.

So think think international gangsterism is ok,you just confirmed what criminal scum you are.

Well if it kicked off one of those carriers is the last place i would want to be,they would be sunk in a heart beat with thousands incinerated,Iran has the anti ship missiles than can do just that.

You expect Iran to go to war against the US? the Persians are smarter than that.

US acting as a pirate rogue regime a usual. Iran is acting in accordance with international maritime law to trade with whoever it chooses to. US is a thug and a bully and should focus on handling its growing problems at home.

Do not judge 1.3 billion Indians by a few extremists like Modi allied to the Zionists. Under the Congress party we had the most enlightened and secular governments. Just like Turks should not be judged by the insane actions of Erdogan. Extremism is a ideology of hate.

Population figure does not matter .. you have to show respect to minority.. India minority has got no chance whatsoever.. near future you will see division in India. like Pakistan

You seem to be a dog like your profet

You are not an Indian as educated Indians have better grasp of English than the British. It is PROPHET, not profet. You are Iron Zion hasbara children’s trolling club of uneducated imbeciles.

Fuckwit, Hindi/Urdu are over 70% Farsi as the Persians/Moghuls ruled over India for 1000 years, illiterate stupid motherfucker. Farsi was the official language of India till the Brits took over in the 18th century. Which sewer did you pop out you stupid cunt :) Ever heard of the Taj Mahal?

You are a pot for pissing f*** off

Pot for pissing what is the meaning profet.. headless chicken you are

India can only survive as a secular country as it is multi-confessional and has enough problems with poverty and internal unrest. Unfortunately, both India and Pakistan are shitholes with nuclear weapons and more than likely a flashpoint for a nuclear war which will be very destructive.

The Jew cunts are “advising” Modi who is an uneducated fuck.

Just like ur ayatoilets and erdogay.Iran and turkey will get fucked pretty soon.Wait and watch the game :D

We also have good things in America. We have Rihanna and Beyonce which no one else have. https://youtu.be/op3zXn-EO2w

and nobody else needs them lmao

Persian Gulf, not just “the Gulf”!

America is using the golf more than Iran. Therefore Persian Golf is obsolete and antiquidated.

The Persian-American Golf is a more modern up to date expression for presence conditions as the world develops and are constantly at change.

LOL!
No, it’s just your mother changing hands every day!

They are International brigands,their gangsterism will not go unpunished,just who the hell do the US think they are?