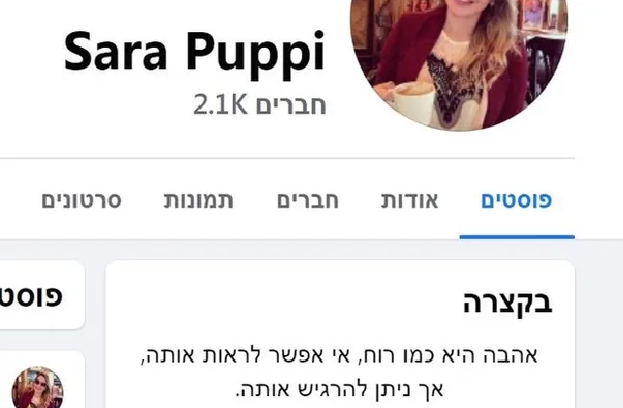 On May 2, the Israeli Shin Bet security agency announced that it had uncover an Iranian intelligence operation meant to recruit Israeli citizens and gather information on targets in Israel.

The Shin Bet said that Iranian intelligence operators used a fake Facebook profile under the name “Sara Puppi,” who was presented as a young Jewish woman with business connections in Israel.

Puppi had thousands of friends, mostly Israelis. The Iranian operators allegedly responsible for the profile would first chat with their targets on Facebook, then move the conversation to WhatsApp. The Shin Bet claims that operators used emotional and romantic manipulation to get the information they were seeking.

The profile asked Shin Bet officers pretending to be dupes to locate information about Israelis who were of interest to Iranian intelligence, as well as Arab diplomats and businessmen in Israel. Puppi promised the undercover officers thousands of dollars in return for their help. Puppi even examined the willingness of the Israelis to harm the targets.

“The Iranian operator behind the Facebook profile used a business cover story to assign various tasks, such as a request for revenge against those who owe him money, a desire to harm personal opponents, and even a desire to harm LGBT individuals in general,” the Shin Bet said.

In one instance, Puppi asked Israeli citizens to place an “inciting” banner on billboards against Russian President Vladimir Putin. The Shin Bet claimed that the move was mean to harm Israel-Russia relations.

The Shin Bet warned in its statement that Iranian intelligence was constantly looking to recruit Israeli citizens through the internet.

“Security officials call on Israeli citizens to be vigilant and cautious amid the threat posed by various terrorist elements on social media and to report any unusual request to the Israel Police,” the agency said.

This was not the first time the Iranian intelligence has allegedly used fake social media profiles to attempt to recruit Israeli citizens. In January, five Israelis were arrested for assisting an Iranian operative who pretended to be a Jewish man on Facebook. The suspects helped the operative in gathering intelligence and making connections in Israel.

Iran appears to be working to expand its intelligence network inside Israel, mainly via the cyber space. The Israeli intelligence has been using the same tactic to penetrate Iran.

Of course LGBT+ had to be mentioned. And, is it unlikely of Israel to have similar ops in Iran? Bery!

Off course, i dont want to mention this… maybe Mauripol and JHK Muhammad and NATO is laughing at you and all the others profiles likes going to this places…. shhhhh! Let them go! Lol!