Tehran has unveiled a new high-speed double-hulled ship with a banner with the words “Go to the Bay of Pigs; the Persian Gulf is our home,” related to the US Navy. 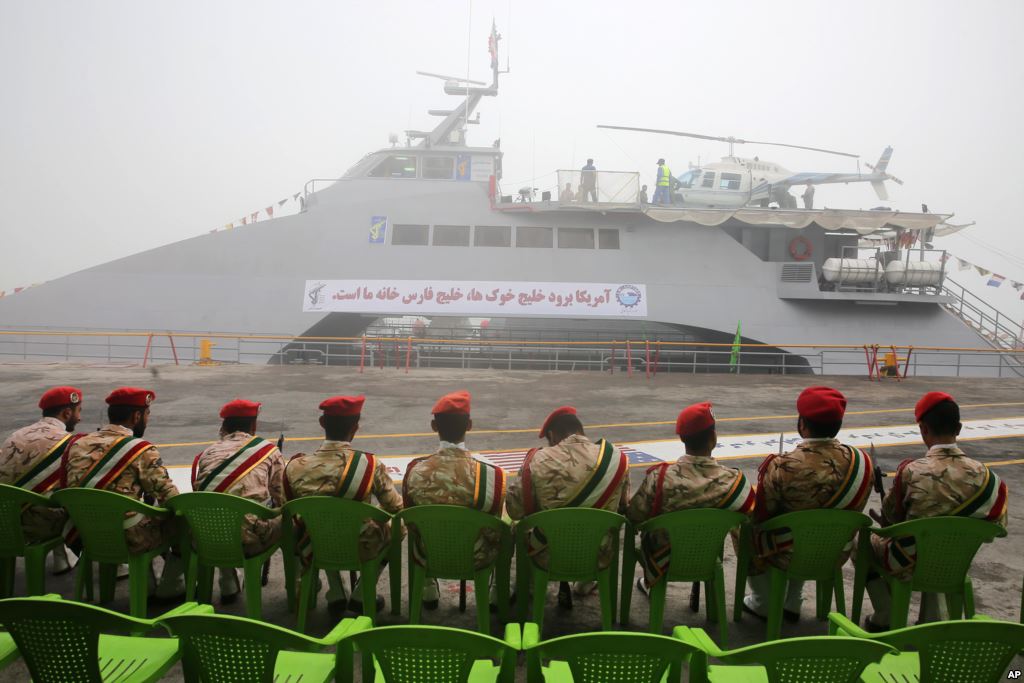 A new speedy helicopter-carrying double-hulled vessel was unveiled by Tehran in the port of Bushehr, Iranian state TV reported on September 13.

Reportedly, the ship is 14 yards wide and 55 yards long. It has an operating range of 10,000 kilometers and is capable to achieve a speed of up to 28 knots, as well as to carry 100 members of crew and one helicopter. The new vessel was named Shahid (martyr) Mohammad Nazeri, after the commander of the Iran’s Islamic Revolutionary Guard Corps (IRGC) Navy Special Forces unit, who was killed in May in hazy circumstances, with some Iranian reports said he died from exposure to “chemical substances.”

Currently, a banner with the words “Go to the Bay of Pigs; the Persian Gulf is our home,” is said to be displayed on the ship. According to an official Khamenei website, “it indicates US military weakness that stems from their failed operation in the ‘Bay of Pigs’ in Cuba.” The banner is a pointed remark to US ships in the region and refers to the failed US-backed invasion of Cuba in 1961.

Earlier this year, the Pentagon has reported about a jump in the number of Iranian provocations in one of the world’s most important waterways, and the Republican-dominated US House of Representatives introduced a resolution reading that current Iranian military actions were eroding stability in the Persian Gulf.

According to IRGC Navy commander Rear Admiral Ali Fadavi, the new ship “increases the deterrent power of Iran and will have an effect on the calculations of the enemy – particularly America.”

“There is no reason for the presence of the U.S. in the Persian Gulf and we have always regarded and will regard it as a factor behind insecurity and evil acts,” he said, adding that the US must leave the waterway.

In August, three warning shots were fired by a US ship in Persian Gulf in the direction of an approaching Iranian vessel. In January, Iran detained ten US Navy seamen, after they drifted into Iranian waters. 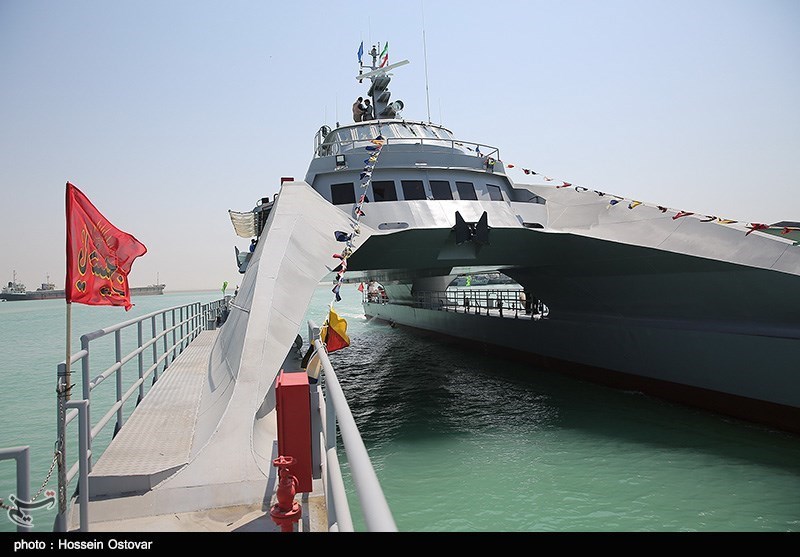 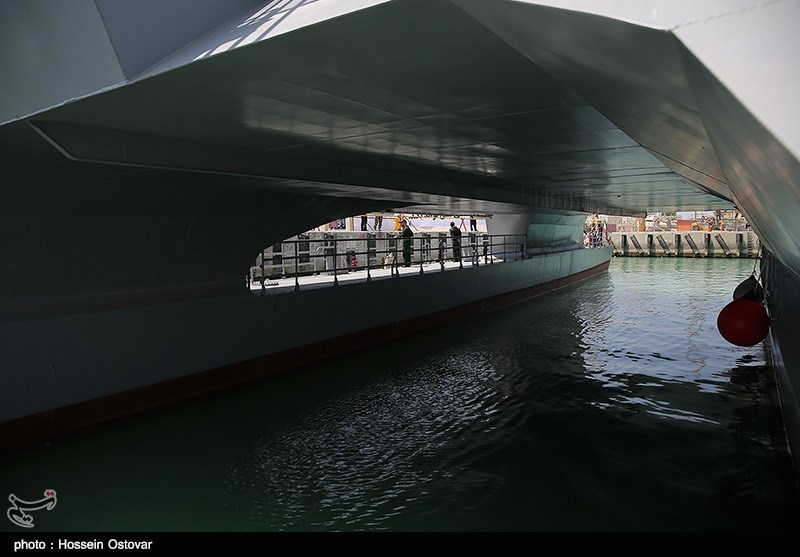 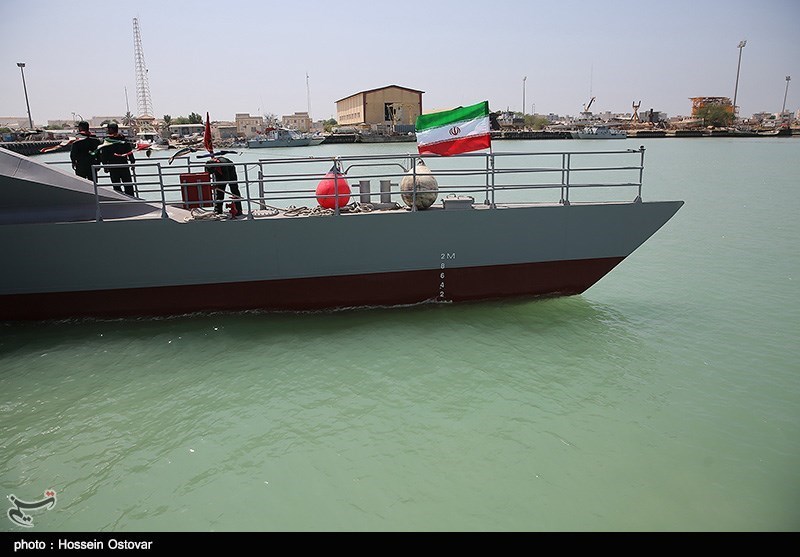 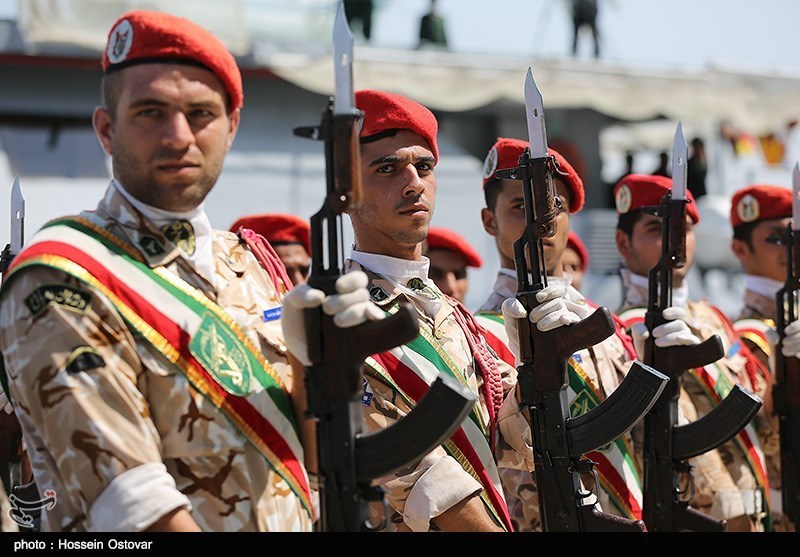 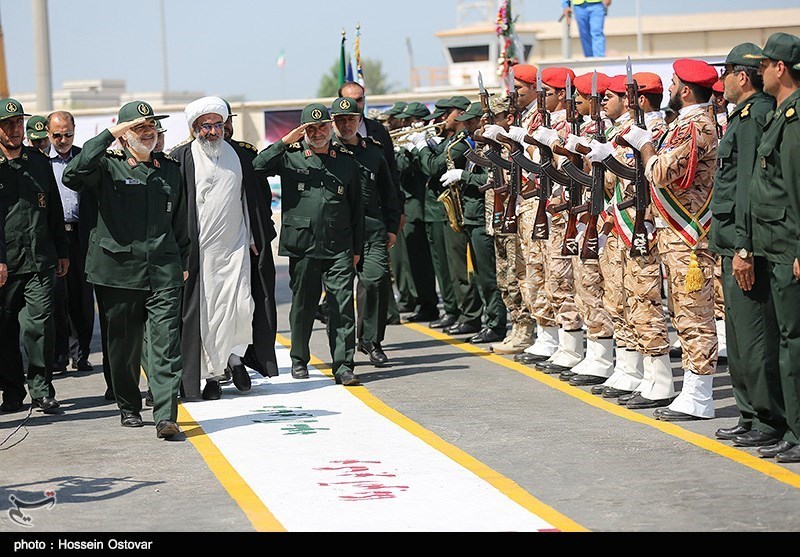 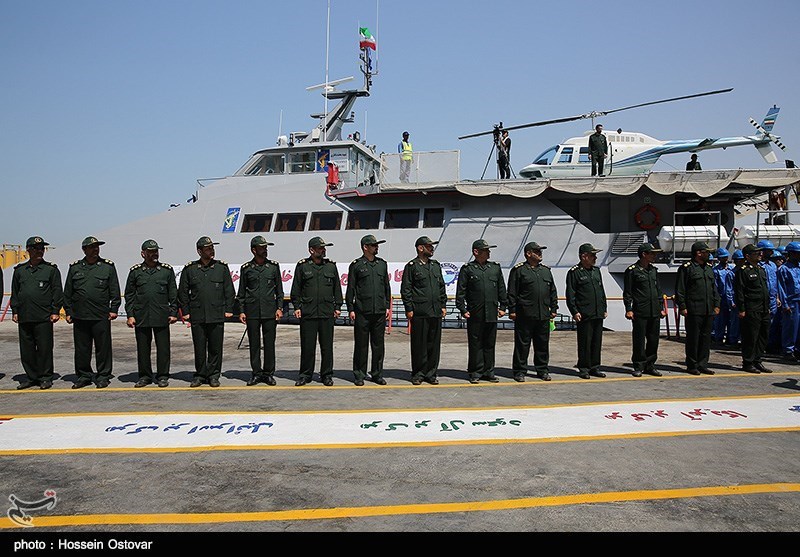 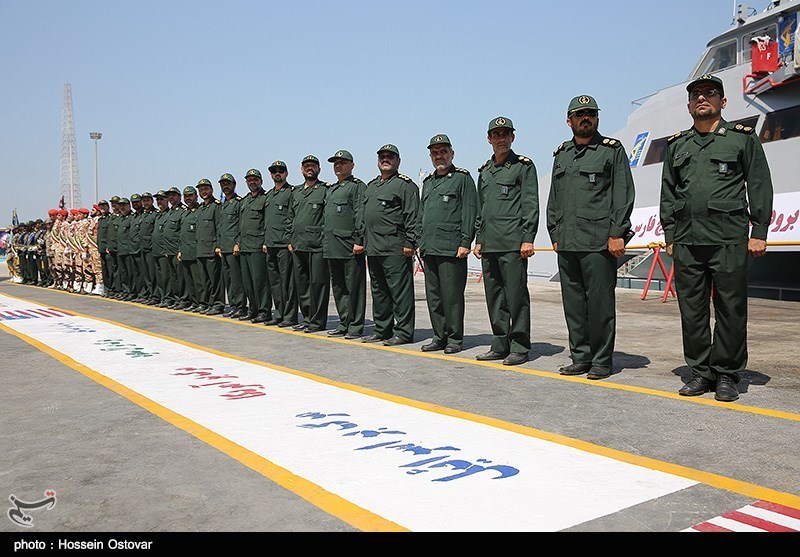 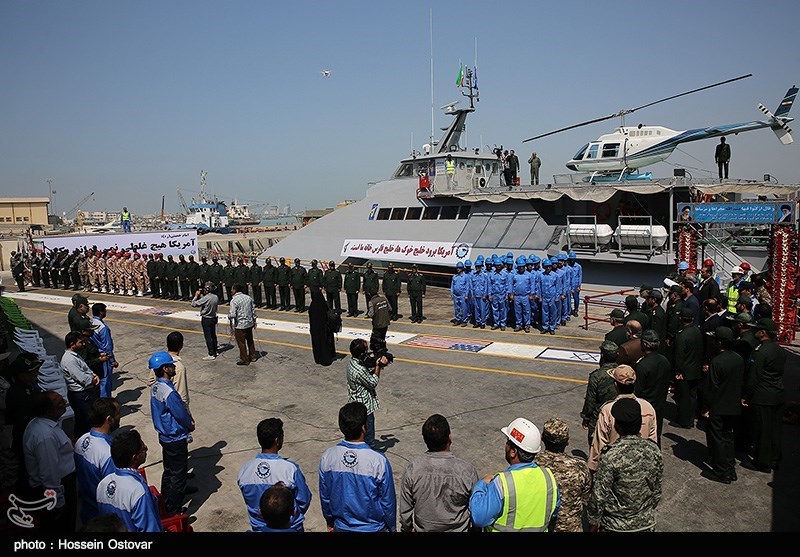 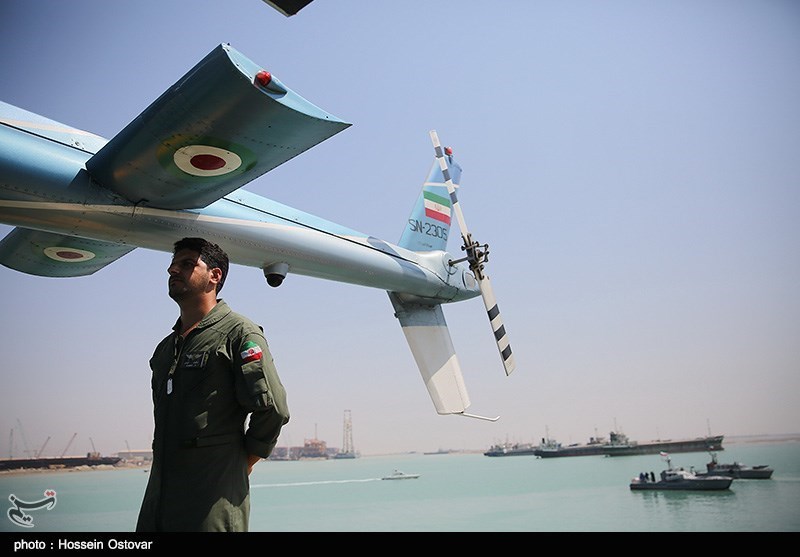 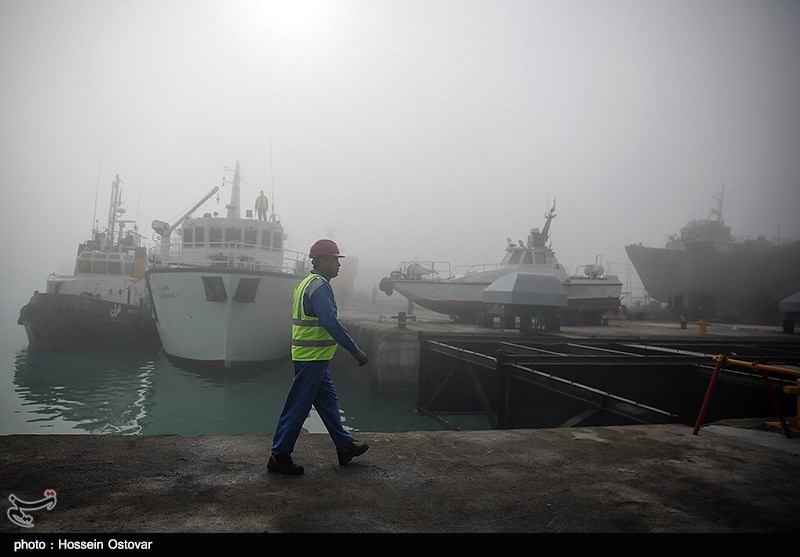 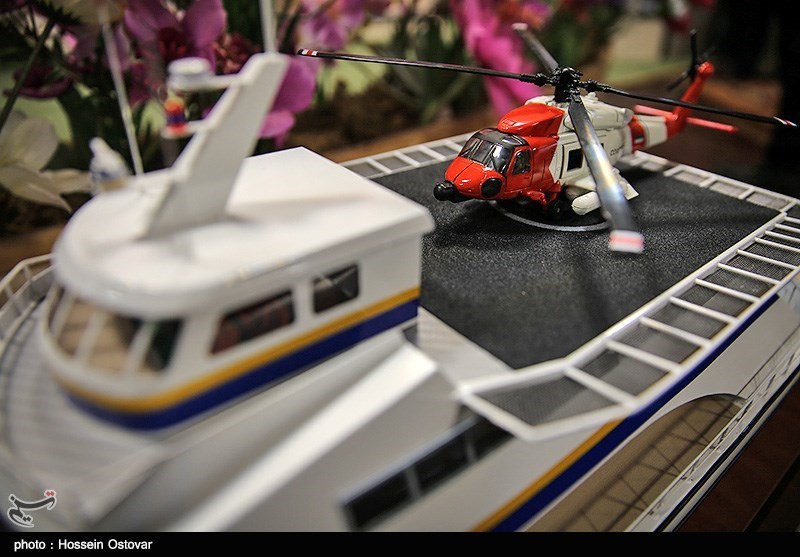 Yeah, I don´t go with the speed estimate either. It would not surprize me if it did better than 40.

We use SWATH hull vessels in the Coast guard that go 14 knots, latvian navy uses vessels that go 20 k and the US Navy is developing SWATH vessels that go 55k. Nothing is said in the article about this ships mission or armament so it’s anybody’s guess as to how much speed it needs to fufill it’s mission.

Hello Grumpy. You perceived pretty much what I am feeling here. Something is not right about what they are trying to project, regarding what the ship can do. It could go either way for me; more deadly or less deadly than it looks. The dinky helo is what signaled that a lot is being hidden here. Have a great day.

i don’t give a isht if it goes mach 2, it won’t outrun a missile or a round from a 76mm cannon. this boat is posturing, and it’s pathetic to anyone in the know.

Hey Oathkeeper. You made me laugh. You´re right, can´t outrun a missle or cannon. For that matter, neither can a destroyer. They offer a much larger target too. :P Have a good day.

i’ll take the electronics and weapons suite and the damage control on a US Navy destroyer over that of any other nation’s best ship.

I used to think that also. My dad was a sonar jockey on a tin can during Korea. Nowadays, I would not depend to heavily on the gear. Everybody has something for the other guy.

i guess the difference is, you are going off your dad’s experience, and i’m going off my own experience. and needless to say, your opinion on the matter is poorly informed.

Oathkeeper, think about what you are saying. Your opinion is, that my opinion is poorly informed. Are you kidding? Neither one of us possesses perfect knowledge. That´s just a fact. So you can say what you want, as well as I. It doesn´t matter.

You think that the US is all good to go against anybody. I thought so for a long time too, until I climbed into our gear and saw what was happening for real. We are way puffed up. Like many others who like to talk a big game, as I was when I was a youth, I hope you are out there on the receiving end of things, if it all goes off, so that you may get first hand experience to know the truth. If you make it back alive, then you will have an informed opinion, on what combat is like between advanced militaries, as were those who were my mentors. Until then, it is just hot air.

Have a great weekend.

i know exactly what i said and stand by it.

You say that you have served, and you just said, to one who has served, “I hope…you are on the receiving end”. You are a scumbag.

As has been said before, I said what I said and know why I said it. It is so easy to name call, talk tough, be confident, when harm is not in front of you. I would like to see how all the confident and name callers would be, under, let us say, duress. You don’t like what I say and that is too bad. Let me tell you something, in the face of cold or hot steel, arrogance is not a good idea.

The Iranians are giving the classic ‘heads up, we got something for you’. I could care less what you and others, who only want it their way, think and where they place confidence . I will however, pay attention to those who have a track record of beings tough mothers. Think I am kidding? I know of 10 US sailors who thought the game was all cool too, until …….

We are way sloppy folks. No amount of hardware can save anybody from that. And that is my point.

A destroyer can engage and defeat a missile.

Hey, sit back and watch the show.

I am also an Oathkeeper. And under the Constitution, by the Founding Fathers, we were never to fight a war off of our own land. Iran is a Republic like America use to be. Keep your Oath and uphold Republics, and down the the UK-Empire our nations arch-nemesis.

Hahaha oathkeeper-you’re not even a fuqing human being. Iran is a theocracy, you have to be the stupidest poster here. GTFO of my country you genetic shit sack, and take the rest of your filthy people with you. “Founders” your family has no ancestral tie to America, you are an immigrant POS-GTFO of my country.

I love it when you comment, it always gives me the chance to share more truth with the world. Here is your daily dose of truth.

It should be more successful than the US ‘(c)Littoral’ class ships… and the UK’s Type 45 Frigates whose engines doesn’t like Mediteranean water.

I would’ve been impressed if it was an actual helicopter carrier, or helicopter destroyer (in the vein of Japan’s Hyūga-class). Instead I have nothing but contempt because it just looks fragile and useless. Are there even any on-board weapons? And is it capable of carrying more than one helicopter? A fleet of them might have some use but only if the accompanying chopper has some combat value. To that end, could the indigenous Toufan I/II be used? Stick that on the back, along with an auto-cannon and a pair of missile pods and voilà, you have a littoral combat ship that could match the US version.

Hello Clausewitz. Exactly! And whom do they have in the pictures? Qassem Soleimani? Is he just there for the food or did he have a day off!?! More than that, the message is they are going to kick our butts out of the Gulf. When and how they do it is not relevant. What is striking to me, is that they said it. This is a very creepy event here and my atennae are at full attention on this one.

I would direct your antennae elsewhere for the time being. The Islamic Republic could create a military force that acts as a credible deterrent but when they publish absolute crap like this, it’s just embarrassing. Now the Pasdaran are real professionals but they need someone high up in the food chain to stop wasting money on useless projects like this and get to work on buying (not domestically constructing) new gear. Anti-ship missiles, frigates and corvettes from China, fighter-bombers and tanks from Russia. None of which is likely to happen.

Yes, this is very strange to me, what they have done. It’s like putting a big slingshot on a rowboat and calling it a ship of the line. So, why did they do this, is what I am watching to discover. This is not about hardware. It is about some other aspect of the game being played. The answer will come. Have a great day.

Time will tell. You too.

Lol, weak! The U.S will use the rod of God super weapon in space and would turn Iran into a parking lot.

I wonder how many helechopters the Iranians are going to lose before they figure out that landing outside of the harbor will require more than several inches of clearance on either side of the landing skids.