Tehran is two months away from nuclear weapons capacity, according to Israeli Defense Minister Benny Gantz.

“Iran is only two months away from acquiring the materials necessary for a nuclear weapon,” Gantz told a gathering of 60 ambassadors in Tel Aviv.

Gantz said that the world needed an alternative to the 2015 Iran Nuclear deal, in case it fails entirely.

“We do not know if the Iranian regime will be willing to sign an agreement and come back to the negotiation table – and the international community must build a viable ‘Plan B’ in order to stop Iran in its tracks toward a nuclear weapon,” Gantz said.

The preferred option, he said, is a diplomatic one.

“At the end of the day, the goal is to reach a ‘longer, stronger and broader’ agreement than the previous one,” Gantz said. An “Iranian nuclear program could incite an arms race in the region and the entire world.”

He still hinted that a military solution was possible, if diplomacy failed.

“The State of Israel has the means to act and will not hesitate to do so – I do not rule out the possibility that Israel will have to take action in the future in order to prevent a nuclear Iran,” Gantz said.

At present, the “Iranian threat is land-based,” with Tehran operating “via its proxies in Iraq, Yemen, Syria, Lebanon and Gaza,” he said.

Gantz also alleged that Tehran was behind last month’s attack on the Mercer Street ship, in which the captain and a crew member were killed.

“Our assessment is that the UAV employed in the Mercer Street attack was launched from Iranian territory and approved by Iranian leadership,” Gantz said.

According to the Israeli Defense Minister, “Iran’s capacity for conventional violence is increasing”.

He pointed out that Tehran has more than doubled its military investment over the last five years from $22 billion to $49b.

Gantz highlighted Iran’s activity in neighboring Lebanon, which is in the midst of a severe economic crisis.

“Every couple of houses in Lebanon are used to store [some of the] thousands of rockets and missiles,” he said. “Iran and Hezbollah are exploiting the crisis in Lebanon and are undermining the Lebanese government.”

He spoke just one day before Prime Minister Naftali Bennett is scheduled to present such an alternative plan to US President Joe Biden at the White House.

If true, Trump and Bibi are to blame. 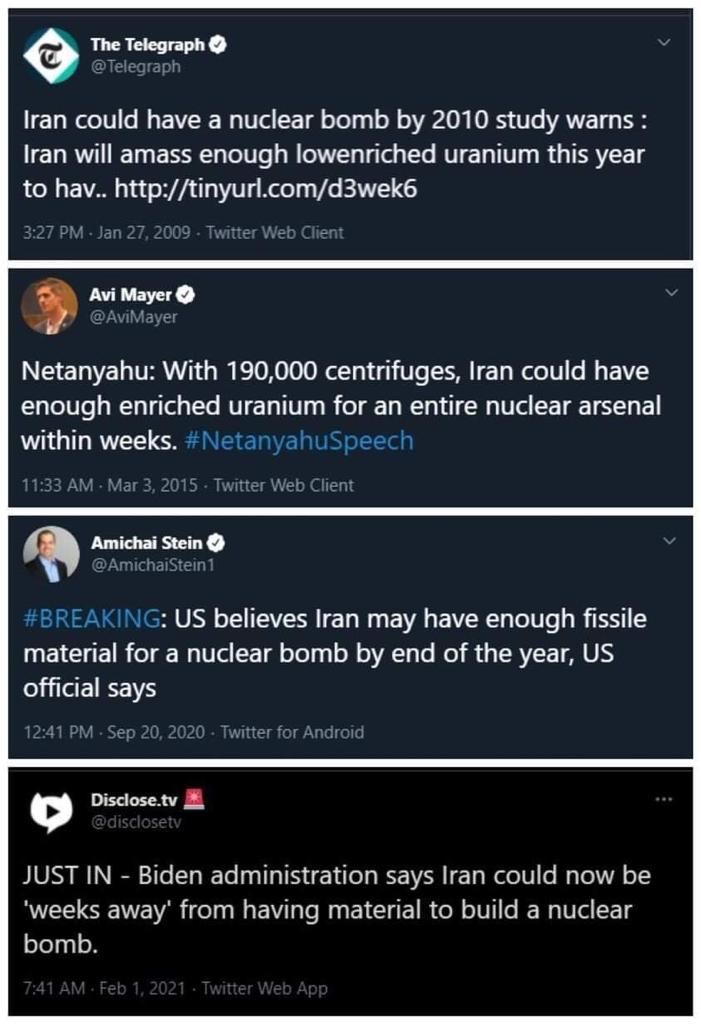 As shown in this article, there is a very complicated web which connects Iran’s nuclear program to decisions made by Washington during the Ford Administration:

Washington’s geopolitical maneuverings often lead to a series of unintended consequences, particularly when it comes to dealing with Iran.

Surely if Iran regime really wanted a nuclear warhead they could have gotten one by now.

The deeply racist genocidal notorious evil-minded War-Criminal/State-Terrorist ZioNAZI colonial apartheid Regime of IsraHELL told this BS propaganda LIE for the last 20 Years. They can’t help themselfs it’s pathological they LIE always about any- + everything 24/7 for the last 70+ Years.

Israel opened the Pandora Box when started to use nuclear weapons against other countries. Are documented at least 4 nuclear bombs used against Syria in 2013, one against Yemen in 2015, and one against Lebanon, in 2020. All attacked countries have the right to construct their own nuclear weapons for dissuasion and self-defense.

What evidence do you have that you say it is documented?

B.S.! No evidence at all to support your self serving claim.

IT show israeli cowards keep pissing int he pants every day. Bcuz thier lies never stop. and we have been hearing of iran ngoing nucler from alst 20 years. This zionist brainwashed stretagy of the world desont work nowadys bcuz world knows how mauc this zionist lies and show hypocricy.

So, is Israel part of JCPOA?? What is this urge to meddle with Iran’s affairs?

So what is the problem ??? Israel have nuclear weapons …this will be a good for the power balance in the area..go Iran Go..

These jewish fools are behind the times.

Iran has had nuclear warheads for years.

They could not even stop Pakistan going nuclear 40+ years ago

Yawnnn! We have been told the same story for over 30 years.

The Zionist Regime is + was never very imaginative, the told the same fabricated BS propaganda Lies again and again according to the famed Goebbels Credo they so much embrace.

BREAKING: Israel 2 months away from complete disappearance from earth lmao

More nonsense statements from criminals posing as a government.

Same old regurgitated garbage. The whole world is sick and tired of the lies peddaled by this satanic entity. They have nothing positive, nothing at all to offer this planet but a continual verbal diahorrea of alleged holocausts and a “poor me” syndrome. A quick glance at their Talmud will quickly confirm this !

As our DM Gantz said – this time it’s real after they have been enriching uranium to 60% for almost a year, they are one step closer from breaking the nuclear point. If there is no agreement and Iran keeps rushing to the bomb, Israel will stop Iran one way or another. I suggest Tehran to back down now as long as they still can, if a war starts then all of their missiles will not save them from Armageddon. Only a fool would think Iran can destory Israel when we aim our entire arsenal at them, so for the sake of both nations they need to make a U-turn NOW or face the consequences even if we stand alone. Some of you will call me in names like cowards, diaper army etc..pray to God that you won’t get to test us when we are with our backs against the wall.