The Islamic Revolutionary Guard Corps (IRGC) will be supplied with the Zolfaqar missiles that were first presented on Wednesday. 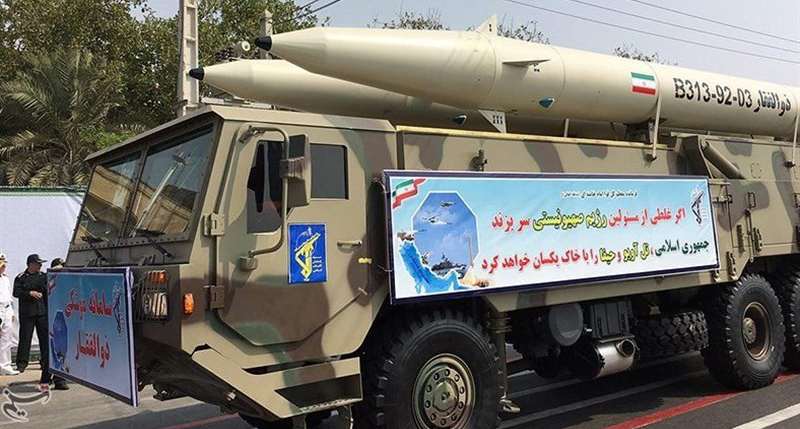 Iran plans to supply the Islamic Revolutionary Guard Corps (IRGC) forces with a large number of various types of the Zolfaqar missiles, the Fars news agency reported on Tuesday, citing commander of the Aerospace Force of the Army of the Guardians of the Islamic Revolution (AFAGIR), Brigadier General Amir Ali Hajizadeh.

“The new Zolfaqar missile is being supplied to the IRGC Aerospace Force and a large number of this missile will be supplied to our units by the yearend,” Hajizadeh told Fars.

Answering the question if Iran has any plans to develop missiles, capable to hit targets at a distance more than 2,000 km, the Brigadier General said: “Our target is Israel and we don’t need missiles with a range of more than 2,000 km.”

On Sunday, mass-production of the domestically-designed Zolfaqar missiles, which are capable of hitting targets at a distance up to 700 km with a zero margin of error, was started in Iran. Iranian Defense Minister, Brigadier General Hossein Dehqan, and General Hajizadeh attended an opening ceremony of the production line.

The Zolfaqar mid-range missiles were first presented on Wednesday, during the nationwide parades of the Armed Forces.

In recent years, Teheran has made giant advancements in developing of long-range missiles. In March, two domestically-designed Qadr H ballistic missiles were fired from the Eastern Alborz Mountains at a target on Iran’s Southeastern Makran seashore, located at a distance 1,400 km. One missile had a message, written on it, that said in Hebrew: “Israel should be wiped off the Earth.” The missiles were fired during the main stage of the IRGC drills in Central Iran and various parts of the country.

It’s perfectly reasonable for Iran to have ballistic missiles for their defense considering that all of their enemies are armed to the teeth and they need to have a retaliatory threat but they can’t resist that little extra tweak, “Israel should be wiped off the Earth.”

Can somebody please give Iran the phone number or email address of the PR firm that handles Saudi Arabia’s account?

Well agree. But they could try to be friends instead of the opposite way.

Yes can kill if You say arabian sea to an iranian. Do You try to explain whats well known about it, the iranian go home and build a rockets or to more or contact north korea for it.

said in Hebrew: “Israel should be wiped off the Earth.” ….. deliver the proof, or shut up.

On the other hand, 700km is enough to bombard Ryadh from Yemeni territory. I hope to see the missiles soon in Yemen.

They mentioned Israel, not the USA.

I forgot, the israelis are the pimps of the americans. I can see why they would be upset :D

Yes but you know as well as I do that people in the U.S. go bat sh1t crazy when Iran does stuff like this and Iran knows it too. Iran likes to pull our chain.

I do not believe that this type of juvenile display helps Iran but I am not overreacting to it. This is great fodder for the Newsmax and Freebeacon crowd. Actually, I do hate Iran for doing it because I have to read the rightwing sites hyperventilate as if they don’t have enough to rant about already.

Well, they are very small and not comparable to, whats going on in USA.

Something like You think all muslims think a Khalifat all over is a realistic and good thing. Im sure many muslims might like a Khalifat a la 1001 adventures as beautifull dreams even violent now and then – But ISIS, FSA.

So try some other links. Im sure Sanders almost opposite in many ways has many times more support, then those.

Some things are meant for internal consumption. Which is more important than war mongerers in the USA.

agree, much is blowing up ballons and not only them. They have big problems themselves.

You didnt forget, they were “pimps” of the Americans.

Dont think so, there has always been that dirty kinds of changing. Its not about Israel. They want stability and some control especially in Iraq.

They also want influenze at the pipelines througt Iraq and Syria to that coast saving a lot of money for transportation as well.

For the time being they are not maneging their kurds well and PKK`s are in Iran in small amounts.

And there were only a few arabic speaking jews in Jerusalem guarding hole places.

Things went wrong because the Ottomans rule were based on everybody should be there and not nationalism – Nationalism – Jewish, Christian, Sekular, as well as all the Islamic versions.

In 1930 it didnt mean much Jews and other came in and mainly in livings, which wasnt there before creating many new jobs(mainly for themselves).

The problems came as examples, when jews bought land rented to locals from the arabian upperclass, and Jews bought it for jews and palastinians had nowhere to go.

700km can hit a lot of nice Saudi oil infrastructure from proper Iranian territory from across the Persian Gulf. Most of the Saudi oil producing areas are on the eastern portion of Saudi Arabia.

Yes and the moon too, if its low. They do it now and then, thats why its half now and then.

Night You and Real Anti-Racist Action should take a game on Your commodore 64.

This is very good news, these can be used to defend all of humanity against the evil forces of Zionist, their corrupt banks, and their massive Imperial-Navy.

So whats up – pussycat dae, dada…

Violence is bad and Israel is here to stay. Let them live and Israelis should concentrate on peace with Palestinians and stop killing them and taking their land.