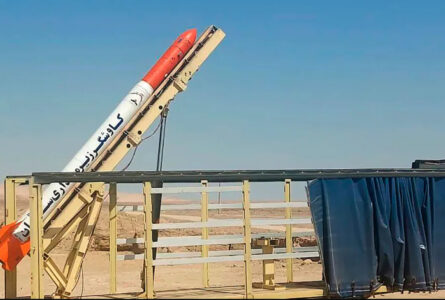 The Iranian Defense Ministry showed a Saman test tug rocket before being launched on Tuesday, Oct. 4, 2022

Iran successfully test-launched a space tug capable of shifting satellites between orbits. The Iranian Ministry of Information and Telecommunication Technologies was cited claiming that the launch resulted in success.

The Saman test spacecraft was built by the Iranian Space Research Center and launched by the country’s Defense Ministry. The test was carried out thanks to the cooperation of the Iranian Space Institute and the Ministry of Defense. It will be used to transfer satellites from lower orbits to higher ones.

The Saman Orbital Transmission Block engineering sample subsystem was previously tested in close to orbital conditions. The Iranian Space Institute noted that the Shaman system, developed directly in Iran, was first introduced in 2017.

Hassan Salarieh, chief of the Islamic Republic’s space agency, told state TV that officials “hope to use and test the main tug in near future.”

Iran has long pursued a space program claiming that it is aimed at peaceful purposes. However, the US fears it could be used to advance Iranian ballistic missile program. In June Tehran had launched a solid-fuel rocket into space and in August a Russian rocket successfully launched an Iranian Khayyam satellite into orbit. It’s named after Omar Khayyam, a Persian scientist who lived in the 11th and 12th centuries. Iran plans to put into operation three more versions of the satellite launched earlier this year by Russia, as reported, an official representative of the Iranian government said on August 12. In April 2020, Iran’s Revolutionary Guard also revealed its own secret space program by successfully launching a satellite into orbit.

Aren’t they afraid they will hit Allah with that?!

aka22
Reply to  Vlad from Romania

Iran is ancient Persia and they worshiped Mithra, a sun god before Christ but quite similar. More like a Zamolxis of our acestors.

Islam conquered their way there in early 10th century and with that came Alah.

Math was perfected by persians based on their heritage of babylon and asirian who were writing long before the egiptians. Also chess game.

1. De-orbit all American satellites that cross over Iran.

2. Threaten to de-orbit all subversive media satellites, such that the companies leasing them airtime will end their business relationships.

Dude, it’s a stacked 3rd or 4th stage launcher space tug, not demolition derby… This tug is not a reusable one. When completed, it’ll be used to inject satellites from 100-500km orbit (LEO) into higher orbits (MEO) beneath GEO.

Although not a bad idea. We better start working on a space forklift or something!

Iran could also launch a communications satellite over North America that does nothing but provide free television all day: sports matches, movies, etc.

It would have all the normal programming, but not advertisements. I’m sure the corporate West will be eager to come to the negotiating table then!

Saman is compatible with satellites of what size?

Supply the West with cheap russian internet, with Browsers and search engines outside of mainstream via satelite. We can use it for emials and browsing information.

I thought only the Jews were the smartest people in the Middle East. Turns out the Iranians are way brighter.

Makes sense, after all the Jews learned all they know from the Persians.

Its good to see cooperation between Iran and Russia