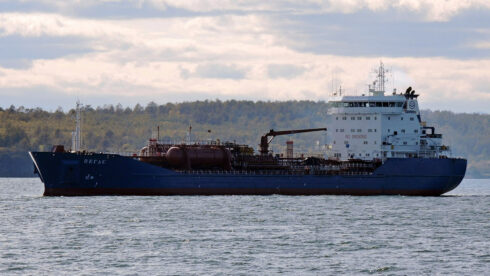 “European Strategic Autonomy” exposed as only a buzz phrase without real substance.

Greek authorities on orders from Washington seized in April the Russian-flagged Pegas tanker that was carrying Iranian oil. This has sparked a diplomatic crisis between Athens and Tehran and proved beyond doubt that that current Greek administration is serving Washington’s interests rather than Greece’s. It also exposed the supposed “European Strategic Autonomy” as nothing more than a buzz phrase without any real substance to it.

“Following a request from the US justice system, the oil is to be transferred to the United States at the expense of that country,” a spokeswoman for the Greek port police told AFP, thus confirming 21st century piracy by a supposed modern and law-abiding democracy.

However, what is most concerning for Greek diplomacy is their seeming shock that Iran had responded to the unprovoked hostility by seizing the Greek tankers Delta Poseidon and Prudent Warrior in the Persian Gulf on May 27.

Iran launched a barrage of missile strikes against US military bases after Iranian Revolutionary Guard Corp leader Qassem Soleimani was assassinated in January 2020. It is also recalled that Iran seized British ships in 2019 after Britain’s Royal Marines assisted in the seizure of an Iranian oil supertanker near Gibraltar. If Iran made proportionate responses to hostilities from two powerful and nuclear armed states, it defies belief that Athens did not expect the Islamic Republic to respond, especially as 17 Greek-flagged vessels were vulnerable in the Persian Gulf.

Prominent Greek journalist Kotrotsos Serafeim tweeted on May 27: “It is very serious and can turn into a storm. There are currently 17 Greek ships in the Persian Gulf. Large Greek companies are in Iran. It took years to build this relationship. Prudence and attention are required. Only our interests count.”

Not only do major Greek companies operate in Iran, but in early 2021, discussions of a transportation-economic corridor were held, with delegations from Greece, Iran, Armenia, Georgia and Bulgaria. In January, Greece provided 200,000 COVID-19 vaccines to Iran in a bid to boost soft power initiatives. In addition, on May 16, the Iranian and Greek Foreign Ministers held a phone call and emphasized the need to “maintain high-level interactions between the two nations.”

However, it is clear that Tehran became frustrated with Greece’s unrelenting ambition to follow US orders and not resolve the crisis of having its oil illegally confiscated, hence the vessel seizures in the Persian Gulf to force the issue to be discussed and resolved.

The diplomatic crisis between Athens and Tehran, coupled with the crisis with Moscow, has undermined Greek interests for the sake of serving Washington’s.

Greece effectively has three routes to reach resource-rich Central Asia – shipping to Russia via the Black Sea; shipping to Syria and then a land route to Iraq and Iran; or, a land route via Turkey, Azerbaijan and the Caspian Sea. By carrying out US orders loyally, it makes a mockery of the claim made by French President Emmanuel Macron and Greek Prime Minister Kyriakos Mitsotakis that they are working towards “European Strategic Autonomy.”

With Athens having destroyed its relations with Tehran and Moscow, it is evident that the Mitsotakis government prefers the route to Central Asia via Turkey and Azerbaijan – a disturbing prospect considering that the two Turkic-speaking countries in the last week of May conducted joint military exercises and trained on how to land, storm and capture a Greek island.

Athens prefer access to Central Asia via Turkey, which on a daily basis violates Greece’s airspace and questions the sovereignty of the Greek islands. It is also remembered that on September 4 2020, Azerbaijani President Heydar Aliyev told the Greek Ambassador: “Without any hesitation whatsoever, we support Turkey and will support it under any circumstances. We support them in all issues, including the issue in the Eastern Mediterranean.”

The ruling New Democracy in Greece is traditionally the party of the Greek bourgeois and Western-wannabe liberals. With their return to power in 2019, a changed and more pragmatic foreign policy was promised. And although this has seen relations between Athens and the Arab World, India and Africa grow to unprecedented heights, and even initially major improvements in its ties with Russia, as soon as the Mediterranean country’s “new and pragmatic” foreign policy was put to the test, under the banner of “European Strategic Autonomy”, New Democracy quickly contracted back to serving Washington’s interests instead of Greece’s. This again is evidenced by the very fact that only the US, and not the European Union, has an embargo on Iranian oil.

It proved beyond doubt that the mullah freaks are serving Vladimir Putin’s interest trying to sell the cheap Iranian crude. Ayatollah Khamenei even learned to sing Katsusha for Vladimir Putin. They look like completely deranged maniacs singing Katsusha together.

michael
Reply to  Muhammad your Prophet

Dear muhamad the fucking prophet, has anyone told you today that you’re a cretin?

Muhammad your Prophet
Reply to  michael

That’s a complement or an insult? I can never tell the difference at the Southfront troll farm.

I hope you see the irony in your statement of “Southfront troll farm”, being that you are part of the problem.

He’s not muslim you low IQ moron. He’s a Zionist denigrating the name of a Muslim prophet.

Cromwell
Reply to  Muhammad your Prophet

They are teaching Greece a lesson you retard get used to it.

Palaban
Reply to  Muhammad your Prophet

Feed your proper with PIG’s BLOOD, you fukkin shaitan.

Muhammad your Prophet
Reply to  Palaban

Z The Clown
Reply to  Muhammad your Prophet

The Greeks got what they deserved, they stole Irans oil for the US and now they lose 2 ships containing much more oil lol

thoughtful
Reply to  Muhammad your Prophet

just the thought of it makes me laugh, is there a vid?

Sufkut
Reply to  Muhammad your Prophet

Muhammad your Prophet
Reply to  Sufkut

It proves without doubt that the Southfront troll farm is correctly identified as a big hub for antisemite filth like you.

Last edited 4 months ago by Muhammad your Prophet
-1
Reply

Yuri
Reply to  Muhammad your Prophet

Slaves: “Following a request from the US justice system, the oil is to be transferred to the United States at the expense of that country.”

It doesn’t cost the US anything, GayGreeks have no power to disobey their masters, these fuks can’t even say no to Zion.

The US ordered their slaves to steal and they got the money and the Greeks got the big old wood inside their assholes again. Greece = Zion and yanquis slaves.

Slaves of America deserve no respect and shall have that exact amount, Iran spits on american lapdogs, I spit on them too.

Where these empty vessels or did Iran siphon oil from them and feed their refineries?

I believe they’re going to trade, because a whole Iranian crew was taken

The truth
Reply to  Loten

iran could take two more greek ships tomorrow. greece will hang on to yanqui coatail and beg them to rescue its ships, but yanquis will be nowhere to be found.

Iran is not irrational or suicidal to do these sort of things. Greece is one of the few countries on good terms with Iran, sharing the narrative of countering the muzlim jihadist turkish Daesh threat. Greece will apologize and reimburse Iran for the damages incurred.

The Governments of these Vassals are pathetic,they will damage their own people rather than tell Uncle Sam to take a hike.

The Greeks are the new Poles when it comes to idiocy.

yeah what this author writes is largely true, but there is a mistake on the bit where Greece is supposedly trying to reach ‘central asian resources’……?…..lol. There ain’t much in central asia except some gas and all ‘Stans’ have tiny economies. They got nothing to offer to a relatively close by Iran, what the hell will they offer Greece or the EU thousands of miles away? Has anyone noticed the sudden death of BRI/ OBOR? No one even talks about it.

Iran sure doesn’t take any crap from the West. If Russia could grow some balls maybe they could stand up to the West in the same manner instead constantly fawning over European “partners” who murder Russians.

May as well call the PM in Greek, Bidenopolous. The Greeks have always had good relations with Iran, and are now pissing them down the drain, thanks to their shit for brains puppet of a leader.