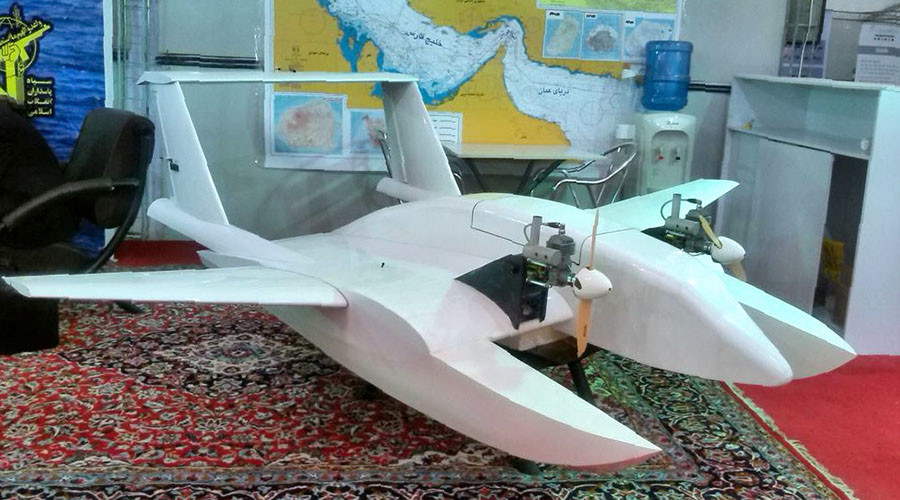 A handout picture released on October 26, 2016 by the Tasnim news agency show what Iran’s elite Revolutionary Guards referred to as “suicide drone” and capable of delivering explosives to blow up targets at sea and on land, in the Iranian capital Tehran. © Tasnim news / AFP

The Iranian Revolutionary Guards allegedly announced that they had developed a “suicide drone” designed for stealth suicide missions against land and sea based targets, the Iranian Tasnim news agency reported.

The drone will deliver explosions to blow up the targets.

The UAV was designed for maritime surveillance, but can also carry missiles in addition to “heavy payloads of explosives for combat missions to launch suicide attacks,” Tasnim article reads.

“Flying at a high cruising speed near the surface of the water, the aircraft can collide with the target and destroy it, either a vessel or an onshore command centre.”

The UAV is allegedly capable of flying at very low altitudes to avoid detection, descending to about half a meter above water. The report adeed that the UAV can also be flown as high as 900 meters at a speed of around 250 kilometers per hour. The range is 1,000 kilometers.

By now, Tasnim has taken done the original article. Nonetheless, many media outlets have already reprinted photos and information. 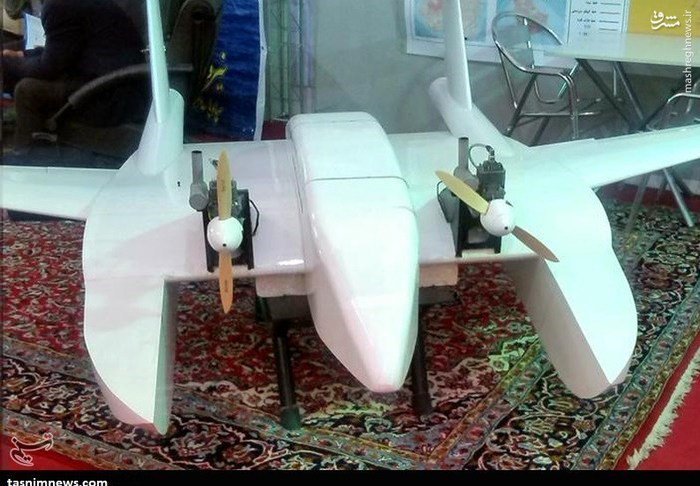 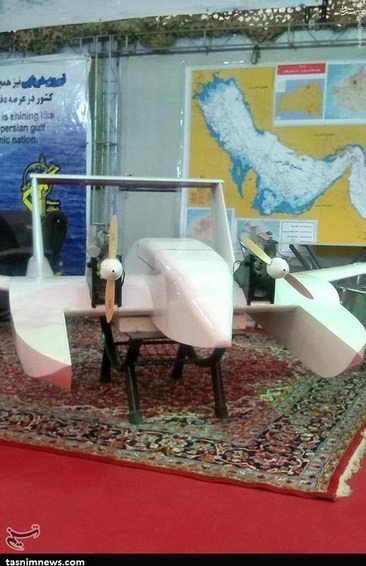 I don’t see any difference between a UAV and a guided bomb, maybe the range only…which is the goal of this weapon? I’m really ignorant on the sky war tactics…but this looks only like a cheaper missile. I’d love to know if I’m wrong

Almost all of these wunderwaffen of Iran are fake props, don’t waste time with them.

I tend to agree with you here. I am not a mechanical or aeronautical engineer but the propeller and engines do not look big enough, even to scale to generate the necessary thrust to make the think fly.

Oh, my favorite photo of all time was when the Iranians showed a roomful of copies of the downed U.S. stealth UAV that they captured with each carrying two small missiles. They really know how to piss us off in the U.S. but we deserved it in that case. We have no business flying drones over their country. I have to give them credit for bringing one of our drones intact. I heard a report that they hijacked our radio controls and landed it. Given the good condition of the UAV, I actually do find the explanation plausible.

I dont think one needs to be a engineer, just own a lawn mower to see it has twice the engine that this has. There is no way that will fly!

Yeah “props” that actually fly, remain undetected by the US Navy, live-stream the battlefield, shoot missiles and do all the missions that a drone is supposed to do.

Your own government acknowledges that Iran is a drone power yet the brain dead Muricans are still in denial:

The Iranians definitely hacked our controls and landed our hi-tech UAV intact. Our drone pilot must have used a password like ‘TopGunUSA’ :-)

True, this UAV is merely a glorified bomb. But it can hit its target without endangering its pilot.

Having built something similar with fiberglass (no warhead and just one engine) I can attest that it shall take off with a long enough runway in under 20 seconds. Computer technology and fiber optics have been miniaturized to the point that governments probably have the technology to pull off a UAV like this.

But aren’t bombs, by definition heavy because they have to contain enough potential energy to do serious damage, so yes, even a small model airplane can fly but can it carry a payload of say, 100lb? BTW I am not an Iran hater, just curious.

Good question. I just don’t know enough about modern explosives to know about how heavy a reasonably powerful explosive would weigh.

The more modern (non-thermobaric) military explosives are running a little under twice the power of TNT. By way of comparison, an M67 grenade, with a casualty radius of 15m, uses the equivalent of 11.18 oz. of TNT, (6.5oz. Composition-B). You don’t need much for anti-personnel work IF you can precisely guide your attack, so how quiet and how well this thing flies are the main issues.

Air delivered ordnance is so massive, and also so seemingly ineffective because it is expected to deal with thick masonry, because it is typically vaguely directed at dispersed groups of people, and because it generally misses it’s aim point by many metres, tens of metres, or even hundred of metres. Blast dissipates with the square of distance, so a target 10 metres from the blast only gets 1/100 of the explosive force.