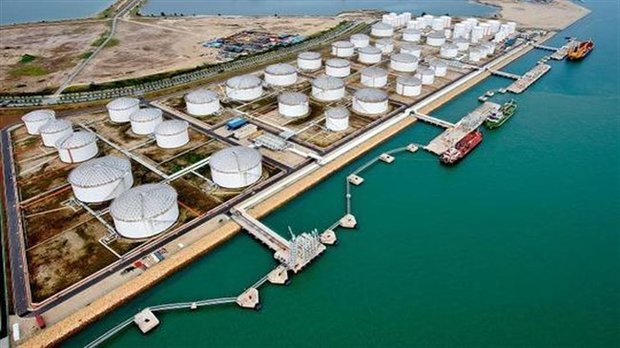 Iran’s outgoing president Hassan Rouhani announced that Iran had opened its first oil terminal in the Gulf of Oman, bypassing the strategic Strait of Hormuz.

Tehran has, more than once, threatened to close up the strategic trade route in the case of an escalation in the region.

“This is a strategic move and an important step for Iran. It will secure the continuation of our oil exports,” Rouhani said in a televised speech.

The new terminal is located near Jask port on the Gulf of Oman, just south of the Strait of Hormuz.

It will allow ships headed into the Arabian Sea and beyond to avoid the narrow route. Iran’s main oil export terminal is located at the port of Kharg inside the Strait of Hormuz, a waterway less than 40 kilometers across at its narrowest point.

“Today, the first shipment of 100 tonnes of oil is loaded outside the Strait of Hormuz. This shows the failure of the US sanctions,” he said.

Rouhani said Iran aimed to export one million barrels per day (bpd) of oil from the new facility. It has also built a 1,000km pipeline to carry its crude to the new terminal in the southeast from Goreh in Bushehr province.

The Strait of Hormuz is a narrow channel at the mouth of the gulf through which about a fifth of the world’s oil passes from Middle East producers to markets in Asia, Europe, North America and beyond.

There have been periodic confrontations between Iran’s elite Islamic Revolutionary Guard Corps and the US military in the area.

Iran and its nemesis, Israel, have repeatedly traded accusations of hits on each other’s vessels in the region of sensitive waterways.

Israeli-owned vessels were attacked in the Gulf of Oman in February and April, with Israel blaming Iran for the explosions.

Iran’s largest navy ship also sank in early June after catching fire in the Gulf of Oman. Officials have not yet said if the sinking of the Kharg was an act of sabotage or an accident.

Meanwhile, the United States were weighing new sanctions on Iran’s oil sales to China as a way to pressure Tehran to commit to the nuclear deal, the WSJ reported.

US negotiators continue to work with European and international partners in Vienna, Austria in an attempt to revive the Joint Comprehensive Plan of Action (JCPOA).

But as those negotiations stall, the US is mulling alternative options to encourage Iran to stay at the negotiating table or up the cost of leaving it, US officials and people familiar with the matter told the WSJ.

US & UK need to understand this and stop linking a humanitarian exchange—ready to be implemented—with the JCPOA.

Keeping such an exchange hostage to political aims achieves neither.

TEN PRISONERS on all sides may be released TOMORROW if US&UK fulfill their part of deal. 2/2

Meanwhile, Iran urges patience as there’s a transfer of power happening in Tehran.

As shown in this article, there is a very complicated web which connects Iran’s nuclear program to decisions made by Washington during the Ford Administration:

Washington’s geopolitical maneuverings often lead to a series of unintended consequences, particularly when it comes to dealing with Iran.

The US has an entitlement complex regarding Iranian natural resources. They once had control of Iranian head of state ‘monarch’, and thus its resources, and only think in terms of how to resume this lost/ previous state of affairs. This is evident in US Neo-Con think tank papers such as The Road To Persia – about enacting regime change policy and seizing control. The US equally has this entitlement complex regarding Saudi natural resources, and if ever lost their current vassal head of state ‘monarch’, US would likewise seek to enact regime change policy and seizing control. The rhetoric of sovereignty and democracy are thrown out the window when it comes to vast resources of Gulf crude oil.

US is becoming largely irrelevant as 40 years of failed sanctions against Iran have shown. Now US sanctions mean nothing as Asian trade is paramount. US has sanctioned half the world to no avail and that includes Russia, China, Cuba, Venezuela and occasional threats against India for buying Russian weapons. US has a big mouth and little penis.

Iranian technical capabilities are formidable to have built a large oil export port in such a short time and being able to export 2 million barrels a day despite pathetic Americunt sanctions. LoL.

The american empire is ending, they lose influence daily, shouldnt be long and they lose world reserve currency. Their own corruption will bring them down. We all can help by refusing american dollars. Wouldnt hurt to avoid Israel as well.

On trhe other hand, UK is in an “Empire-rebound” by moving a mainpart of its shootingparty to Oman. There you go. War, war, war. The Brits cannot get enought of it. They love it destroying countries.

Iran is big rich and resourceful country and after China and Russia graduates more engineers and hard science graduates. It is also a very nationalistic country so Americunt losers simply can’t do a damn thing. Now a very real Axis of Freedom is emerging between China-Russia and Iran.

The high quality of construction, speed of development and safeguarding environment and building safety features like positioning the terminal on a off-shore island is brilliant engineering. The place is very well designed. Compare this to the Saudi sh1theads who could not even put out the fire on their Ras Tannura facility after the Ansarallah drones hit and had to call in their Americunt and limey masters to do the job. Iranians are very smart people. Kudos.