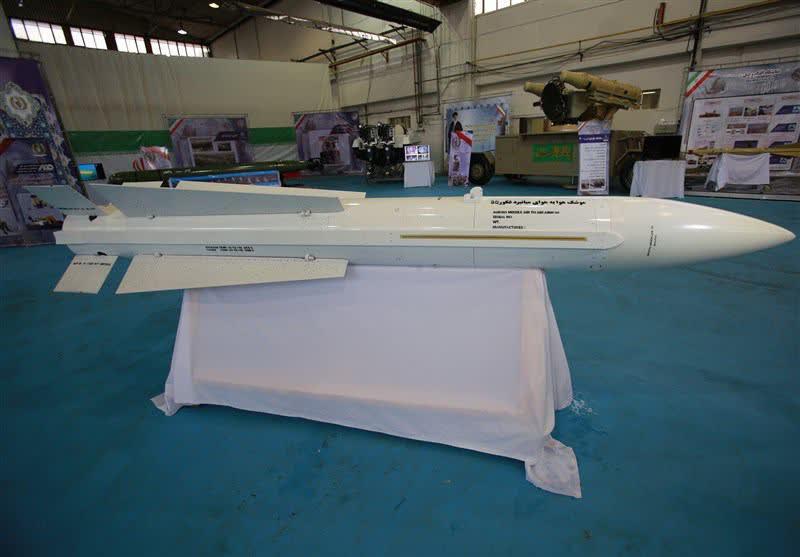 Iran has kicked off a mass-production of its Fakour-90 air-to-air missile, the Iranian media says.

Iran’s Defense Minister, Brigadier General Amir Hatami, visited an official ceremony on July 23. He said that the missile had been developed based on operational needs and in cooperation with the Army Air Force of Iran.

The defense minister praised Iran’s military preparedness and defense capabilities, adding that any threat against his country will receive a proportional response.

The Fakour-90 is a radar-based medium-range missile. It’s based on the AIM-54 Phoenix, is used on F-14 Tomcats to intercept and destroy air-to-air targets. The missile was unveiled in 2017.

So….., Iran has made a copy of a US missile that was invented in the 1970’s? Maybe even earlier. To be carried by a plane also designed and invented around the same time? Unless it has some new features and abilities that make it lightyears ahead of the old AIM-54 Phoenix I don’t think US pilots will be shaking much in their comfy aircraft, as the Russians have missiles with similar range but far more modern capabilities.

It seems easy to be dismissive of Iranian weapons design, as it all to often seems to be copies of 70’s US and more recent Russian designs. In which case Iran might have been better off copying the Russian Pantsir, so as to prevent their troops and installations in Syria from being blown to pieces by the IDF. And deploying their copy of the S-300 to Syria as well. That at least might give the Israeli’s and US some pause of thought before attacking the Iranians there directly.

“so as to prevent their troops and installations in Syria from being blown to pieces by the IDF” This whole “Iran in Syria” talk is more like pretext for the press or whoever. The IDF has intervened numberless times against the SAA, and what the Iranians claim (ie. no Iranian troops apart from small staff and logistics in Syria) is likely true.

You are most uninformed Sir

Then feel free to enlighten me, good sir.

I am sure Fakour 90 is not an exact replica of what the Shah got in the 70’s, they reversed engineered the airframe of the missile and improved on its radar and EW jamming capabilities. After all, US pilots did not have to contend with BVR missiles in the past

the similarity is owed to the requirement of being loaded on pylons which were exclusively designed to employ a single type of weapon.

the attacks are directed against SAA and not the none existing iranian troops allegedly been in syria and the scum of the earth use them as an excuse.

Iranians may have based the airframe to the american missile, why reinvent the wheel when you have it ready? But I am sure is where the similarities with that american missile end.

not really, a few things are worth noting: First off the AIM-54 Phoenix Missile was [still is] the longest range air to air missile ever developed by a NATO country, The only reason the AIM-54 was put out of service was due to a change/refocusing towards counterinsurgency from previous cold war era thinking. The AIM-54 production was only cut in 2006, the 2006 variant; of which the Fakour-90 is being compared too, is considerably beefed up from the original 1970s production. The Fakour-90 is vastly superior to the AIM-54, with superior guidance system, enhanced range and greater speed. The Fakour-90 missile guidance system is approximately 30% smaller than the AIM-54, with the missile’s range estimated to have increased by approximately 15% [over the AIM-54], this means an operational range to hit targets at distances of 220km. The Fakour’s cone also hides a sophisticated Iranian built guidance system similar to that used on the Mersad surface to air missile, giving the platform seek on ECM and seek on radar capabilities. But what does this mean in reality?? well the US operates the vast majority of aircraft, including the F-18, F-15 and F-16, with a maximum strike range of 75km [note the best the US offers is the F-22 Raptor deploying AIM-120C missiles with a range of 105km]. So this means Iran’s air-force can now comfortably fire at hostile targets before said targets are even near strike distance. The Fakour-90 is a big change in the regional power balance, with numbers this missile means US (and allies) regional air-power face real problems. Couple the Fakour-90 alongside Iran’s own indigenous passive phased array radar system and you have detection of both stealth aircraft and cruise missiles at long range with an effective the long range air to air missile.But most importantly, this system continues Iran’s in house military modernization with hardware all in house built and with no reliance on foreign powers.

I should have scrolled down a bit before posting. Your explanation is spot on.

Hey man, you seem to know a lot about these things, so I want to ask you: What do you think of Iran’s radarsystems? I have heard good things but I’m not sure.

You haven’t been doing your homework. The Iranians have been building phoenix knock offs since the 1980s, and are the only country in the world to have scored a number of kills with them during the Iran/Iraq war. There’s really no reason to advertise this missile unless it has a number of upgrades and probably does. Seeing as it it’s a *top-down* weapon, it even has anti stealth applications as stealth aircraft are not designed to be radar resistant from a missile homing in from above.

nothing to be excited about unless you can make a copy of AMRAAM . phoenix is obsolete

But it shows that the Iranian engineers are able to reverse engineer, and produce their own native missile. How many countries can do that? It’s only a matter of time before they make more enhancements.

it’s not a copy of the phoenix.

it’s similar in shape because it needs to be used by Tomcats, for which the phoenix was designed.

Nothing to be excited about AMRAAM, against peer aircraft that are highly maneuverable and have good EW scramblers, it’s success rate would be 20% or less.

AMRAAM is an upgraded Phoenix, and the Pheonix is an upgraded Sparrow. The US hasn’t had a truly new missile in a very long time, ever since those German scientists the US kidnapped died. It seems no American knows how to design a missile from scratch, so they just keep upgrading the old German designs.

A very appropiate name for a missile to be sent to trumpy and his zionist buddies.

What they need to be making is lots and lots of mines to saturate the straight.

I’m pretty sure Iran has the Strait of Hormuz covered. The first American Jewish bomb to drop, will stop all oil exiting the Persian Gulf.

I wonder how well this works, we probably won’t ever know even if we do go to war since the Iranian Air Force has changed little since 1979.

Don’t be so ignorant. The US has a great record of underestimating the enemy.

I estimate that Iran relies on a motley assortment of antiques ranging from F-4s to F-14s obsessively maintained due to over four decades without replacements. You are very quick to hurl insults, that is no way to live life.

You are right that the Iranian air force is very old. It seems Iran has concentrated on missile defense, rather than bomber offense like the USA. Russia also concentrated on defense, and today they are decades ahead of the US in missile design. There are a lot of advantages in peace, the constant attacks staged by the US on other countries is what has turned it into the cesspit it is today.

Sinbad, seriously. It’s painfully obvious you’re just trying to make people hate America. This time you’ll finally admit that our mutual enemy has a decrepit military by deploring western war mongerings against peace lovers. Also you posted at 1230AM my time and had an upvote within 10 minutes, I’m sure I know who did that.

Sneaky….I saw what you did there….our mutual enemy?? You honestly believe, sitting in California or Oregon….that Iran is your enemy as it mine sitting here in New Brunswick or Quebec? Why would Iran be our enemy??

It’s a shame you feel so sensitive to being called out. Or are you being coy?

He says on one of the many Southfront articles about recent modernisation of the the Iranian air force… Do you guys ever feel shame or do you just move straight on to the next ignorant drivel?

What myth? The myth that Iran has kicked off mass production of Fakour-90 Air-to-Air Missiles? Forgive me if I take Southfront’s word over yours, I’m betting you’re one of those who don’t know the conditions of the Iranian military. Just don’t insult me because I disagree with you or I’ll have to come back with some pseudo-intellectual virtue signalling.

I presume the “insult” was me calling you ignorant. How would you rather I refer to your ignorant comments in future so you don’t have a hissy fit and can stay focused to defend your argument rather than whingeing like a little bitch about your hurt feelings?

Remember how I earlier told you to look up the definition of arrogant? Consider how “Having or displaying a sense of overbearing self-worth or self-importance. Marked by or arising from a feeling or assumption of one’s superiority toward others.” squares with your crusade to educate us on the workings of something you only know from propaganda produced by their enemies.

Between you and me, it should be obvious that we more than likely includes you.