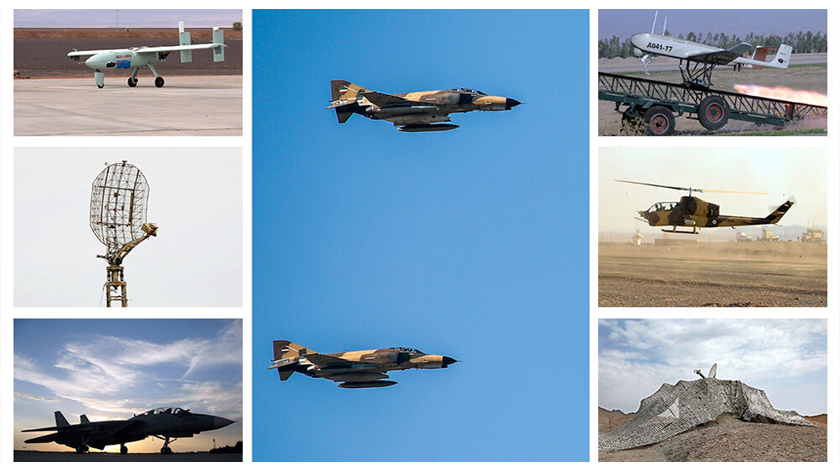 According to a statement, this joint drill is being held by the strategic electronic warfare forces of the four forces of the Army and covers large areas of Iran. Rapid response and electronic warfare units of the Army’s Ground Force, Air Force, Navy and Air Defense are participating in the joint aerial maneuvers, codenamed Sky Shield 1400, whose headquarters will be located in Iran’s central province of Isfahan.

According to Deputy Chief of Iran’s Army for Coordination Rear Admiral Habibollah Sayyari, the drill is the most practical exercise in the field of military electronic warfare in recent years. He said the Iranian Army is going to use its latest achievements and combat capabilities during the drill, with offensive as well as defensive electronic warfare tactics to be put into practice.

Sayyari also pointed out the high significance of electronic warfare in both operational and intelligence aspects of present-day military encounters, stressing that the Iranian Army has developed the necessary infrastructure for defense and electronic warfare. Sayyari said aerial interception and cyber defense operations will also be conducted in the drill.

Accuracy and speed in detection of aircraft will be analyzed, and electronic eavesdropping and jamming systems monitored.

According to Iranian state media, in recent years, Iranian military experts and technicians have made great progress in indigenously developing and manufacturing a broad range of equipment, making the armed forces self-sufficient in this regard.

Iran needs to invest in modern aircraft as its missile forces are quite adequate to wipe out the Zionist parasitic cowardly child killers at will as even tiny Hamas has proved. With China investing billions in Iran, hopefully the Persians and Chinese would invest in joint aerospace and defence projects.

Has anyone heard that in the Italian cable car disaster, 6 of the 14 victims were Israeli? On top, one of the Israeli victims seems to have been a high-ranking Intelligence Officer. The authorities are now investigating as a possible “terrorist” attack. The long hand of Iran????????

my condolences to the non israeli victims though.

At this point, Iran’s actual conventional military power is weak. They still rely on a lot of old equipment from the time of the Shah and also the Soviets from decades ago. I can’t believe they still somehow have kept old F-14’s flying, much less old F-4’s. They even produced their own version of the ancient F-5’s recently. I think they are really more relying on asymmetric warfare at this point. We know they can take down U.S. military drones and capture them, as we have seen in recent years; they have also had success targeting and shooting them down. Iran relies more on proxies to do their fighting, like we have seen in Syria, where Iran backed militias fight along side the SAA. Oh, and almost forgot to mention they are seemingly improving their ballistic missile tech, all derived from old Soviet era missile tech.

I think you are behind the times.

India is destroying itself.

China is laughing at your stupidity from space.

Have you caught the black fungus yet? I’ve heard it’s the latest fashion in hindustan.

Who wants to laugh bitchute.com/video/HakO2fY4VwbE/

hinkgoo smoke too much opium, watch too much bollywood

Jest showing Israel all the secrets they need to know about Iranian EMP.