The PMU is one of the most motivated and effective forces (or maybe the most) that participates in the operation against ISIS in the area of Mosul.

The photo confirms alegations that Iran keeps a high level influence on the situation in Iraq through a wide range of pro-Iranian militias, operating in the country. 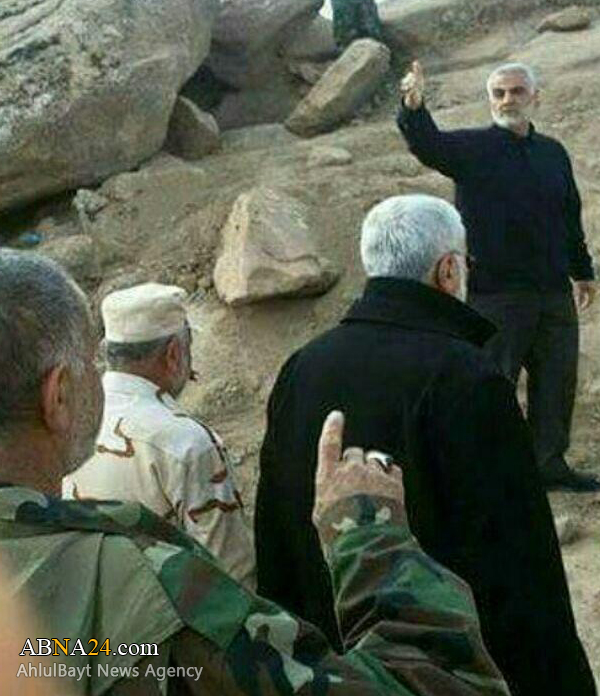 to imagine that back then in 1980s, when Iraq&Iran was at war…History is amazing!

ds ago And USA tries to paint this as a USA ofensive !!! Morons trying to keep dumbed up US Citizens in line…. In Irak is either this ofensive against US-Israel-Saudi children (=ISIS) or US expelled from Irak !! Good for The Irak Republic !! Enough BS is enough BS from the US State Dpt !! Edit Reply

The progress is despite the US efforts to stop it.

Actually this reveals yet another lie by Hillary Clinton as she recoils in horror at how the Iranians are helping Assad [GASP!]. The Iranians are also helping the Iraqis. So using her logic, we should be helping insurgents topple the Iraq govt.

I get it now! Everyone is helping and no one is fighting except a Clinton legacy ? The situation is fluid as well as the Marrowbone! Next the narrative will be Iran is helping Bush obtain past war and legacy costs? The Iranians are helping because Iraqis can’t stop the help? Like wikileaks and the Republicans – rapist birds of a feather?

Iran is helping because Iraq is a country that is 60% Shiite with a Shiite President and they have a clear interest in seeing Sunni radicals defeated whom they call the Takfiri.

GWB made Iraq pro-Iranian because he was too stupid to realize that when you install a democracy in a country with a Shiite majority this becomes inevitable. The Neocons really are not that smart, just vicious and they get even more vicious when their stupidity blows up in their face.

I believe Mosul is about pushing out the Iranian forces Mosul has been in play since the beginning! British forces ” secured the area” a decade ago? At least before isil. Iran is meddling in the vacuum? Maybe they want the terminal?

Still to creepy that Iraq allows US to bomb wherever and boots on the ground Oops sorry we bombed the Iraqi military for the 15th time. IF Phillipines leader does boot US out….that and Iceland sends bankers to prison for 46 years.At least something just occurred in 2016….a year of Lies and extortion.

In the end it is Iran and their Hezbollah allies that kept the threads together for several years for both Syria and Iraq. They held everything together including the front line that prevented Baghdad from falling and Damascus as well. They held together the middle east till Russia finally got involved. Iran deserve humble acknowledgment for being the truest anti-terror Nation upon the earth. Thank you Iran.

Be aware that- QASSEM will become the main target of American pilot Intel Mistake.

Iran gave the world Soleimani , warrior of warriors . Wahhabi’s you are soon to be crushed .

the mistery of operation mosul is the press embargo. why are the kurds the only source of media for this operation?? not even the iraqi government but only the kurds. so there is a press embargo otherwise this can’t be explained. why are only the kurds being allowed to use media. the kurdish source is the only official media that we can use right now. there are much less individiual footages being uploaded on the internet by non-kurds which is very different compared to other military operations. with the situation we have, we can only say that there is a media embargo in which kurds are not being included. the whole world only see the kurdish flags and kurdish fighters. for what purpose?

The US/nato want the Kurds to fill the hole left by their failed fake jihadists. The USadmin are fitting the Kurds up as the next boggey-man. The present situation has never been better for the Kurds to carve out a homeland with its own oil reserve. The US/nato think that backing the Kurds should keep the area ticking over with conflict and open to foreign interference.