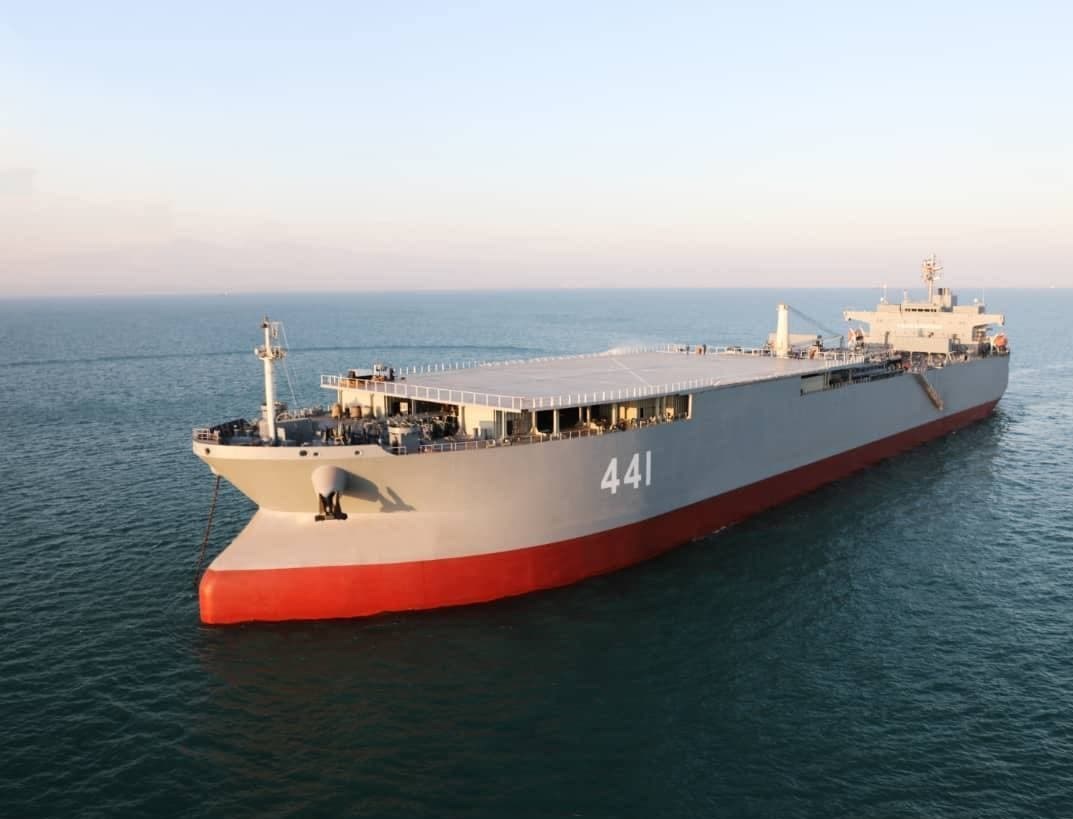 On January 12th, Iran said that two indigenous warships had joined its Navy, and they would be revealed during a military drill on the very next day.

The helicopter carrier dubbed ‘Makran’ will be unveiled during a military drill slated to be held on January 13th.

Another warship that’s supposed to be revealed is the “Zereh” (meaning ‘Armor’ in Farsi) missile launcher warship is one of Iran’s powerful vessels with a high speed as well as maneuverability.

The two advanced domestically-made warships have entered service with the Iranian Navy’s southern fleet in the Gulf of Oman, near the strategically important Strait of Hormuz, the country’s Mehr news agency reports.

One vessel is the missile-launching high-speed corvette Zereh, equipped with sophisticated weaponry “to enhance the Navy’s combat capabilities” in the Islamic Republic’s southern waters.

The other is the 231-meter-long helicopter carrier Makran, which is capable of carrying up to seven copters and a number of unmanned aerial vehicles on board.

Video:#Iran Navy fleet in the Sea of Oman took delivery of a new homegrown helicopter carrier “Makran” as well as a missile-launching warship “Zereh” (Armor).

The homegrown missile-launching corvette would enhance the Navy’s combat capabilities in the country southern waters. pic.twitter.com/9HLD3iL7dN

This is the latest in a series of deployments of Iranian-made military hardware, including warships, drones, and missiles against the backdrop of increasing tensions between Tehran and Washington.

In a separate development, just days earlier, satellite images released by the private US company Planet Labs captured what looks like a “cluster” of activity by IRGC ships in the Strait of Hormuz.

The remarks followed Tehran revealing the existence of a new top-secret underground missile base belonging to the IRGC Navy, which IRGC Commander-in-Chief Hossein Salami said was “one of several bases housing the Guards’ Navy’s strategic missiles”.

Trump is entering his last 7 days in office, and all eyes are on him and whether he would launch a strike against Iran.

The deployment of the two warships comes after Iranian naval chief, Rear Admiral Alireza Tangsiri, on Monday declared that the Islamic Republic “has full control” of the Persian Gulf and that it “dominates the entire waters”.

Tangsiri insisted that the US “has no option but to withdraw from the Gulf region”, which he said is “home” to Iran and “Muslim countries on the southern rim” of the area.

In December, Iranian government spokesman Ali Rabiei warned the US against “extraterritorial adventurism” that he argued is aimed at militarising the Gulf, in a statement that was preceded by the US Navy saying the Ohio-class nuclear-powered submarine USS Georgia and accompanying cruisers had crossed the Strait of Hormuz.

a loading location outside the hormuz and a couple of useful naval vessels together with what else there is, will keep the yankee-twats away and in particular the odious murdering thieves, the jews from palestine, not yet finished stealing the palestinians land, they are aiming to do iraq and syria and so on and Iran is the one and only party in the middle east that can stop the thieving murdering scum. the world will rejoice when the jews in palestine are turned to dust and forgotten by the world.

This is good tool for power projection and quite a capable vessel. Here are some good pictures. It can carry 12 helicopters, six SSM, 20mm Phalanx type close support systems and Khordad 3 SAM systems and a platoon of marines..

Just Me
Reply to  Zionism = EVIL

I don’t like big targets, should’ve invested in smaller, this is what the US would do, only for it to be sunk with 1 anti ship missile

Not as expensive as losing a carrier and it gives them rapid force projection in the Gulf for the majority of forces that are too incompetent to hit it with a missile. It must have some air defenses, if it doesn’t then I agree w/you 100%.

The other ship is an armored missile ship, along the lines of the Corvettes the Russians / US Navy are building. That’s good to throw into the mix.

That’s utility/support ship. It has to be big. The tanker or bulk hull gives it ample space for provisions to support other ships.

That’s how the first aircraft carriers were looking like, 80 years ago, built on battleships bodies. Kind of late but everything needs a start. Probably few of these loaded with drones could cover the region if backed by land based balistic missiles.

Minnies can be a good idea.

Another garbage design by iranians, one shot and the whole ship will sink.

Why don’t you go over there, Rambo, and show them?

no balls no navy no missiles

iranian talking about navy and missiles, how pathetic.

The smashed up the bases of a Super Power:

And struck the Empire’s most expensive drone from the sky:

They also qualify to talk about navy, looking at these photos of weeping american marines:

Injuring American troops on a base next to their country as a retaliation against killing their top general and hijacking foreign ships is a great response and a show of force i guess.

The point was not injury or death.

The point was to demonstrate Iran can strike any US base anywhere in the middle East, any time.

That Point was taken, without retaliation by the ‘Superpower’.

Another reason why Iran is qualified to talk on naval matters is that it manufactures it’s own tankers:

Don’t you worry, it will be sinked soon anyways.

I think he’s a kebab though.

Do you think? He does not know much about Turkey though, I caught him out yesterday. Just an attention seeking troll with Iranophobia crawling up his desperate dumbarse.

hahaha you are so delusional XD

Half the parts are probably Canadian, like Turkish drones:

The rest are probably Chinese, with some Kosher bits.

The paint job is probably Turkish …

Tankers are not easy to sink. Unless you’re talking about an Exocet, which will sink good designs and bad ones with one shot, regardless.

Certainly, one shot of an exocet will take out anything coming out of Turkey.

Did Iran build those or are they oil tankers converted into Helicopter carriers ?

In either case it’s a step forward.

Yes, oil tankers have deep stable hulls and can easily be transformed into multiple deck vessels. The Japanese did some modifications to some of their commercial ships in WW2. Iranian approach is just cost effective and ingenious.

Exactly. In some cases tankers can be harder to sink than battleships.

As an engineer, I can tell you that large tankers have double protected hulls and very good buoyancy and very stable platforms and have long range endurance and also serve as POL refuelers. The Makran is totally refurbished and stay as a long endurance supply, intelligence and logistics ship at sea for months.

If the Iranians could manufacture a few hundred of these and load them with long range missiles.

Then link them with a mesh network running a heartbeat algorithm: All the nodes in the mesh report to guage how many tankers are active.

If a certain percentage go offline (assuming the fleet is under attack), the rest do a mass launch towards Tel Aviv.

… This is my prophecy for future naval warfare …

– Alternatives to Google Products for 2021 – https://restoreprivacy.com/google-alternatives/

Unfortunately, most of those search engines still get their results from the giants and info-thieves, like Google and Bing. Meaning they show the results that Google wants you to see, but at least they can’t track your interests.

Still worthy of a juicy thank you.

That puts the Iranians far ahead of the israelis in indigineous capability.

The israelis get all their key naval technology from the US or Europe.

You are back you little dung beetle lol. Drink some more cow piss.

Your back with your real account now asshole shia

English dumbass, YOU ARE not YOUR. I always post with my only and original account, “Paul” lol dung monkey.

Stfu rafidah go do your mutah with your sister asshole.Dont teach me english and save your dirty iran from collapsing lol.

Most food stuffs and spice exporting firms in India is now using urine and dung from cows as unusual ingredients in its range of spices, skin products and household items. The spices imported from India were detected with cow dung and urine under testing in EU and Australia.

Why dont u talk about iran and mutah?U scared asshole ;)

Isn’t it time for you to rape your cow again?

Do run along and clean your British masters’ poo.

Only place this new Helicopter carrier might come up short is top speed/cruising speed of the vessel. They’ve essentially used a tanker hull, which is going to get them about 10-15 knots. Long as they have the detection systems, missiles, and helicopters, it will be a formidable asset, but it won’t win any races.

Iran is working on newer designs as well.