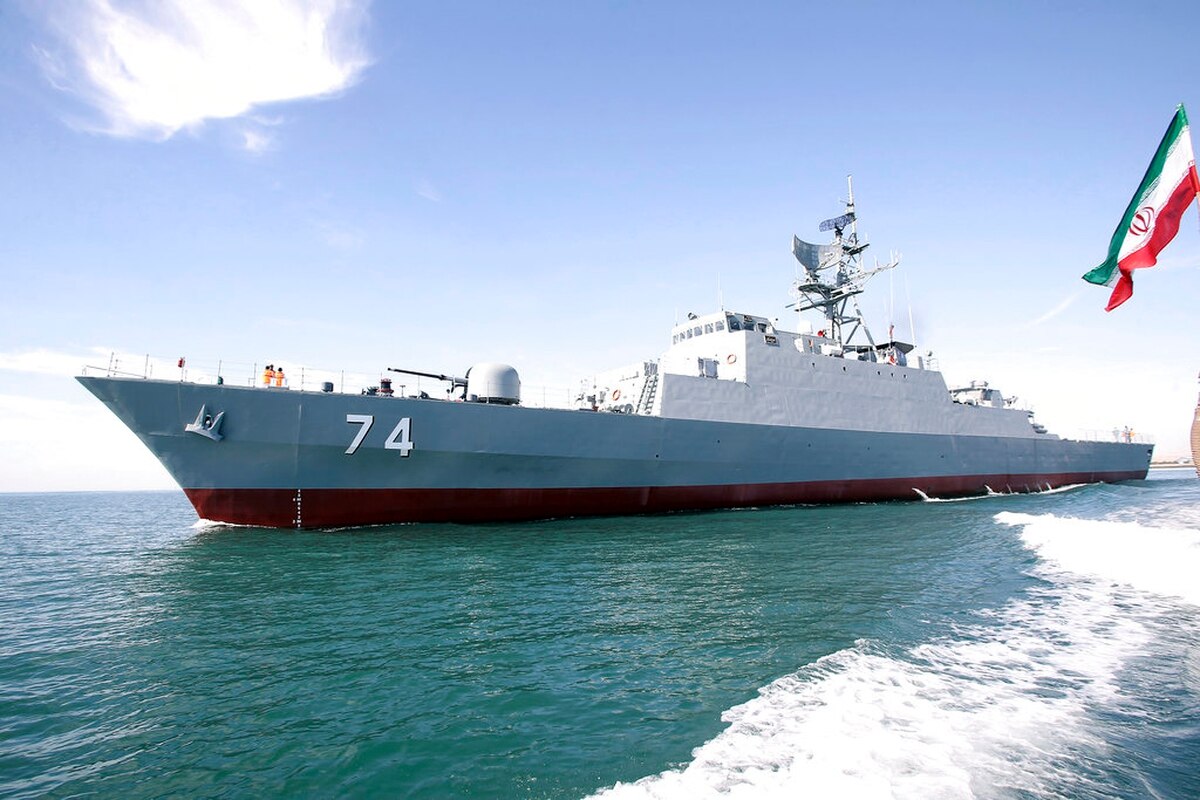 On August 26th, Iran deployed its most advanced destroyer the Sahand to the Gulf of Aden. The aim of the deployment is to ensure the safety of Iranian vessels on the high seas.

Rear Admiral Habibollah Sayyari, the chief of staff of the Iranian Army, said the warship is being accompanied by a logistical vessel and the Kharg helicopter carrier, IRNA reported.

The flotilla is the 63rd Iranian naval group to be dispatched on overseas operation, he added, saying the group will be escorting Iranian ships in the Sea of Oman and the Persian Gulf.

The Sahand destroyer was delivered to the Iranian Navy on December 1st 2018. The vessel has a flight deck for helicopters, torpedo launchers, anti-aircraft and anti-ship guns, surface-to-surface and surface-to-air missiles and electronic warfare capabilities.

Captain Abbas Fazeli-Nia, the commander overseeing the Navy’s production facilities, said the destroyer has also been provided with interception, fire control, radar jamming, and long-range cruise missile systems as well as a radar system of itself and various sensors.

It is the third of Mowj-class frigates built by Iran after the Jamaran and the Damavand, but its enhanced operational capabilities and size make it twice stronger in terms of offensive and defensive features.

As per the report of December 1st, according to deputy navy commander Rear-Admiral Touraj Hassani Moqaddam, the new destroyer is fitted with the domestically-built Kamand close-in weapon system which can fire anywhere from 4,000 to 7,000 shells per second.

It can be in open sea for up to 150 days, while being accompanied by its logistics vessel.

Initially, in December reports said that the ship would sail to South America at first, but, in fact, this would be its maiden voyage.

This naval group comes out approximately two months, after the previous one comprising Bayandor destroyer and the Bushehr logistical vessel returned to the country in June after sailing approximately 2,300 nautical miles.

Separately, the Adrian Darya 1 supertanker (formerly the Grace 1) changed its course to Turkey on August 24th.

On the very next day, the Deputy Coordinator of the Iranian Army Rear Admiral Habibollah Sayyari said that the Iranian Navy was prepared to escort the Adrian Darya 1 if need be.

“The Islamic Republic’s Navy is ready to escort Adrian Darya 1 oil tanker if it is required by the country’s authorities,” Rear Admiral Sayyari said.

He referred to the presence of Iranian Navy in Red Sea and the Gulf of Aden, saying that the Islamic Republic’s naval forces have safeguarded over 6,000 vessels passing through international waters and are ready to escort Iranian vessels anytime and anywhere that is needed.

Commander of the Iranian Army’s Navy Rear Admiral Hossein Khanzadi had also announced Iran’s readiness to escort the recently-released Adrian Darya 1 if needed, to protect it from any possible illegal measures by foreign forces.

Iran maintains that the seizure of the Adrian Darya 1 (Grace 1 when it was detained on July 4th) and its subsequent release 45 days later was illegal. It is the US that now seems set on detaining the supertanker.

On the US side, National Security Adviser John Bolton said that the Adrian Darya 1 must not be allowed to offload its cargo on land or at sea, because it would help Iran’s alleged funding of terrorism.

All hands on deck in the campaign to stop Iran from funding terror, destabilizing the globe, and breaking international sanctions. The illicit oil heading to Turkey on the Adrian Darya 1 must not be allowed off-loaded in port or at sea.

The USS Abraham Lincoln and its carrier strike group are still in the region, mostly in the Arabian Sea and steering clear from the Strait of Hormuz or the Persian Gulf.

“We recognize that tensions are high, and we don’t want to go to war,” said Capt. William Reed, a fighter pilot who commands the ship’s air wing. “We don’t want to escalate things with Iran.”

But that doesn’t mean the US is on the back foot. Navy officials say there is nothing that they can do in the Strait of Hormuz or the Persian Gulf that they cannot do from the North Arabian Sea.

“We can reach Iran from here easily,” said Rear Adm. Michael Boyle, commander of the carrier strike group, in an interview on the bridge of the Lincoln. Five levels below, F/A-18s were catapulting off the flight deck and headed toward Iran, but they would make sure to stay away from the 12-mile border that encompasses Iranian airspace, Navy officials said. To get to the Persian Gulf, the warplanes fly above Oman and other Persian Gulf allies, not over Iran.

Separately, US attempts to form an anti-Iran “freedom of navigation” coalition in the Persian Gulf appear to be having quite little friction and are getting almost no time in the limelight.

time will tell – hopefully it can get a dept-charge on one or two of the israeli stealth-subs hiding in the gulf of oman waiting for the moment when the squatters believe its time to nuke iran – and lo and behold, have they waited long and are now bristling with anticipation. meanwhile Iran’s ships can refuel and replenish at the Chinese Djibouti base so I guess they are there for a long haul and intercept Israeli subs on their way into the red sea via the gulf of aden is easier and better in the narrow strait there. good hunting Iran.

Yes, a bath tub that moves on it’s own power, doesn’t have a leak and so far did not collide with anything. Can’t say the same for the latest American or British ships.

Nor it has been hitted by anything.

Another good move on the Chessboard by Iran, as the US continues to play Chequers and Tidly Winks .

US CENTCOM in action. Trump thinks ‘Its great and very powerful’.

Thanks to Trump, Tiddywinks is on the fringe of being selected into the Olympic Games

That did make me smile. It’s quite possible with the US as well :)

Looks more like a frigate than a destroyer but either way is good enough for escort.

Lost in translation. There’s no word for frigate in Persian and the ships in this class and destroyer are called “Naav-Shekan” which translates into destroyer. The same goes for corvettes, missile boats and patrol boats, “Naav-che”, sometimes with a suffix to clarify the kind.

Even worse, war ship (general term) and battleship can translate the same, “Razm-Naav”. I saw articles that used battleship instead of war ship about an Iranian vessel. (Naav (rhymes with nun) means ship but usually is used for a military/armed ship)

It’s a shame. Thousands of years of seafaring and civilization but not having enough genuine words for such obvious things.

Ah the days of biremes, triremes and the siege of Tyre!

Persians were bad sailors, just ask the Greeks who sank the whole navy in the battle of Salamis…not doing that great on land today either in Iraq or Syria….

All hands on deck, in Bolt-ons terms, means anyone but US forces should intercept the Iranian tanker.

This is what the US has come to, carries a big stick, but stays behind the little minions trying to get them to take the front. Britain already did Bolt-ons bidding, and lost their own merchant ships in the process. We didn’t see the US offer Britain any assistance, after getting them involved with Iran. Instead, Britain had to climb down from the perch the US set them on, in humiliation.

if you want to catch one or two israeli subs far from home then gulf of aden is the place since they, the subs, will have to go home sooner or later. meanwhile they are supported by the unhinged states of A, either from the base in djibouti or the one in qata (qatar is less likely). They might even get a sniff of those entering or leaving the djibouti base and being there, in the gulf of aden or the gulf of oman, they are fair targets.