Iran is considering to use private-sector oil sails in order to thwart US sanctions, Iran’s First Vice Ppresident Es’haq Jahangiri said on July 1 addressing a conference held to mark National Day of Industry and Mine in Tehran.

“The target of the US is firstly oil. They want Iran’s oil not to be sold, which this is impossible and such measures are taken in line with a psychological war,” he said, according to the state-run media.

In May, Washington announced that it is pulling out of the 2015 nuclear agreement with Iran and is re-imposing sanctions lifted from the country. The sanctions will include a ban on Iran over buying or acquiring US dollars as well as restrictions over purchases of oil from the country and investing in its oil sector.

Good…Who cares if America wants to sell Toiletpaper to Iran anymore… People Can pay Iran in Gold for Oil…. Something the U.S.A doesn’t have…Except for the Stolen Iraqi and Libyan Gold… 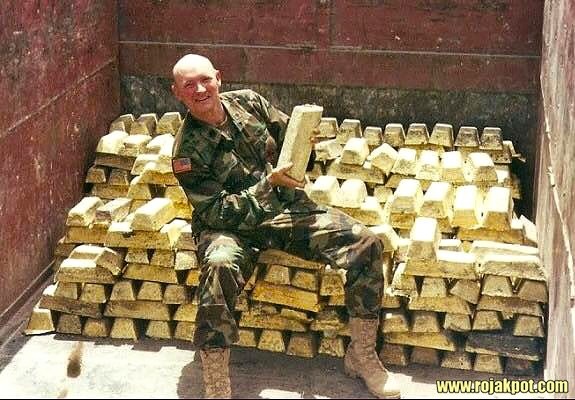 So that is why they could Buy Half of Argentina….

Love seeing that photo he was hard at work like the other US engineering corps (building smelters) this was years ago have more on my Pinterest boards all Engineers doing their bit for the Iraqi people. Fucking theiving scum , no knock was stealing from locals why Fallujah and other places were leveled to cover up their thefts and no other reasons

“Iran Could Use Private-Sector Oil Sales To Thwart US Sanctions”

IRAN doesn’t give a horse-sh*t on US-sanctions, Iran lives like this since the ’80s, as it toppled that CIA-crap Rea-Pahlavi
They sell their OIL and GAS thru RUSSIAN pipelines, and that OIL and GAS goes till CHINA and soon PAKISTAN and INDIA.
….And NO US-dollars involved (THAT’s what the Wall-Street-SWAMP doesn’t like the most)

SF should write article about actual iranian massacres. About shooting is prostesting people. Who protest agains loss of value of their maoney, protest beacuse have no drinking water.

First I thought you were writing about the USA, but in fact, there it is school massacres instead. Different story, same outcome.

The oligarchs are in the USA, Russia, Iran, China, India and many more countries anyway and everywhere it’s the same story in the end. The oligarchs care for themselves, that’s it.

He is Working for the Other Side….sssttt…And he is Not so Wise ass he Pretends to be….

Idiot, you know nothing about iran, irgc.

I hope you understand that I won’t participate in discussions from the ad hominem level and below, that’s not my territory. Thank you.

Then you need to avoid SF since 99% of the comments consist of silly slogans and stupid jingoisms.

The general population of Iran has been hacked off at the mullahs and IRGC for decades since they never addressed their growing water shortage while pissing away billions of dollars on Syria when it was sorely needed back home to rebuild their crumbling infrastructure.
SF needs to get their shit together as for translating news articles. Iran has been using the private sector for oil & NG sales like everyone else around the world unless they’re crooks. Doing that in the open allows the buyers and shippers to obtain insurance on the loads with that information being available to everyone around the World who wants and needs to know about it. Now Iran can sell oil & NG privately to individuals and nations that own their own tankers and are self-insured. China is set-up to do that and probably has a string of tankers waiting to be loaded by Iran today since they got stiffed by that pig dog Marduro in Venezuela.

Major reservoirs and dams in Iran

Just Change Iran for America and you get the Truth….very simple…it is often right in your face and so obvious you don’t even notice…

The thing about making up BS about your opponent, when the true facts are so easily checked, is it makes you look like either a propagandist, or a fool.

The general population of America has been hacked off at Washington DC and Israel for decades since they never addressed their growing water shortage while pissing away billions of dollars on Syria when it was sorely needed back home to rebuild their crumbling infrastructure.
The MSM needs to get their shit together as for spreading Fake news articles. The U.S. has conquered many countries and are using their private sector to steal oil & gas agressively searching around the world for more because they’re crooks. They are not doing that in the open but with the help of ISIS and now SDF which allows the buyers and shippers to obtain plenty illegal loads of cheap oil. With that information being available to everyone around the World who wants and needs to know about it. Now the United States can sell oil & NG privately to individuals and nations that own their own tankers and are self-insured. Israel is set-up to do that and probably has a string of tankers waiting to be loaded by ISIS or SDF today since they got stiffed by that pig dog Marduro in Venezuela.