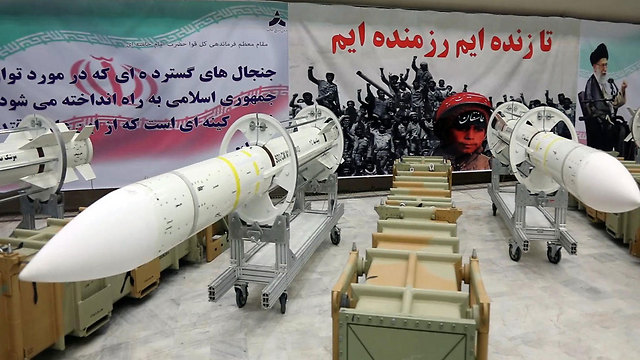 Iran has closed its airspace for US and Saudi Arabia as well as for other countries that have attacked Yemen, the Iranian FARS News agency reported citing Commander of Khatam ol-Anbia Air Defense Base Brigadier Gen Farzad Esmayeeli.

“After the cruelties against Yemen and given the fact that the military system of a country is not separate from its government and trade system, therefore, we cannot show double-standard behavior towards the world and for instance, when we say that the US is a world arrogant power, therefore, we don’t allow the US aircraft, even passenger planes, to fly over the Islamic Republic of Iran because we are against its government’s policies,” FARS News quoted Gen Esmayeeli as saying on Tuesday.

According to FARS News, the decision will also impact other countries which have attacked Yemen, including Saudi Arabia.

excellent! anyway KSA does this to Qatar…

I remember flying from Lebanon to Qatar, we had to fly over Turkish airspace, into Iran, and past the hormouz strait. The plane was not allowed to go through Saudia Arabia, Yemen, Iraq, Syria, or UAE which ultimately made the flight longer and a bit less profitable if you think.

Israel doesn’t allow over flights either accept the zones in Palestine.

Not being able to fly over Qatar is maybe a drop or two extra fuel. Iran – a little more serious. Now add Russia and China to the Iran-mix …. and those nations would have some serious thinking to do. (It’s a looooooonnnng way round.)

This sounds huge. I wonder how many passenger flights went over Iran. Higher costs, the only thing jevvs understand.

Luckily the West has lots of ways of making money from Iran to offset these higher costs.

Iran’s Deputy Transportation Minister Asghar Fakhrieh Kashan says that “the total value of the three contracts for the purchase of 200 aircraft from Airbus, Boeing and ATR is less than $18 billion”

With the new Russian planes, there is a different plane available anyway if really necessary. But I guess the multinational companies are not eager to lose their business. Especially that Airbus is facing difficult times already anyway, with the A 380 not being in demand and production being halted soon.

Actually, from Iran, this is a return too, not allowing Katar to fly over Saudi Arabia and other countries. This way Katar itself stay out of the front line.

How many flights are passing over Iran, I don’t know, but as it is roughly in the center of Eurasia, it might have quite an impact. Nevertheless, it still is more a symbolic act than an economical, at least that is what it seems to me.

Yemen is starving to death and diseases spreading around while the harbors are blocked. that is nothing else than a genocide via a humanitarian crisis. There is much to despise.

It would be a lot less symbolic if say, Russia and China added their voices to that.

We are not yet there, for this matters would have to escalate even more. Hopefully that will never be necessary, as it hurts everyone in the end. However, if the scaremongers are stupid enough, they will, on the long term, isolate themselves only if they do.

Not real jews. Hijacked the jews.

That is what Leadership looks like! You stand up for what is right! spineless USA/UK/EU. Iran is certainly srutting it’s confidence after that win about their nuclear capabilities; Good on you Iran.

Iran doesn’t have nukes. It doesn’t even have a nuclear weapons program because the Grand Ayatollahs fatwa FORBIDS IT.

Why don’t people understand this?

I have sked myself that question many times.

Iran’s Supreme Council and it’s leaders have been quite adamant that WMD’s are evil and inmoral they also point out world hypocrisy constantly so for them hypocrisy is something they would not resort to.

Then you have lots of investigations and no evidence of the existence of an Iranian nuclear weapons program, just more BS.

Gary and santiago.I am against Nato warmongering like the next man.however, should we really believe what iran says?i know if i was threatened and scared i would also like to have an ace up my sleeve. Even if Iran has them so what? We let Erdogan have the biggest amount of nato nukes in europe and he now is tin- pot dictator persona non grata.

And for those that say but we have tqo hundred extra troops in incirlik to stop him i say grow up! Do you really think that two hundred marines are going to stop his army if he really wants them? Come on!

It’s a bit late to reply but I post it anyway, for it’s an important aspect of Shi’a’s culture and faith. It’s a bit long so I apologise in advance.

When a Grand Ayatollah gives a ruling (Fatwa) regarding an important matter, it doesn’t change because they don’t make such decisions lightly and without deep research. For Shi’as WMDs are forbidden and that’s it.

I give you an example: during Iraq’s imposed war on Iran, Saddam used chemical weapons against Iranian troops numerous times (US gave him green light). Basically whenever his military operations hit the Iranian wall and didn’t give him the result he wanted, he used chemical weapons. A lot of young Iranians died and a lot injured and are still suffering to this day. Anyway, some of Iranian commanders suggested to Ayatollah Khomeyni (predecessor to Ayatollah Khamenei) that Iran must respond in kind or at least acquire the ability to do so, should Saddam continue using them. He declared such weapons are against Islam, are forbidden and refused even having the ability of their production. He told the commanders that they have to do with conventional weapons, if they’re unable they should resign and give their place to someone who can.

Please notice that sometimes, in minor (and I mean really unimportant on a global scale) cases Ayatollahs may change their rulings. One example is Sturgeon (fish), which due to it’s lack of scales, was considered “Haraam” (forbidden to eat). Another example is Chess, which used to be forbidden. Both cases are now allowed or “Halaal”. Shi’a Jurisprudence is fluid and adopts to the time and era. It’s not carved in stone and isn’t stock in centuries ago. However, important matters don’t change: War is allowed only if it’s defensive, and yet killing the enemy’s civilians is absolutely forbidden, war is limited to the warriors. Preventing the enemy to access drinking water is forbidden, WMDs are forbidden. Such rules won’t change for us, no matter how our enemy acts.

I guess if we face a big threat (like the one we have been facing from the US for some decades) we have to look for another kind of ace up our sleeve! Hopefully we have a few.

If they have brains they had better have weapons.

Yes sir 100% correct! From the responses others see it for what it is. For those that would think otherwise, the Grand Ayatollahs word if final. If Iran were to create such weapons the supreme leaders words would be proven false! This would have a larger impact on Iran then any WMD benefits. I simply cant see the Iranians in leadership destroying the basis and foundations of the Islamic revolution that placed them there in the first place.

I really don’t care if they have nukes. Hell – how many dogs and their pups are housing nukes these days anyway?

What I find really odd about Iran’s nukes is how …. slooooowwww …..they are at building these things – especially as the CIA gave them the blueprints in 1980. I mean FFS —— 37 years and they STILL haven’t managed to build a bomb? Even Little Kim’s done better than that!

One could almost be forgiven for thinking US and Izzie have got it wrong…..

This is good for them because they can also extend it to their waters also as this would be appropriate measures.They should close their airspace to other countries the ones that support the US and it’s policies.

Hard to do with waters though. To do that would shut off straits.that may lead to war .my heart says do it Iran but my brain says maybe shutting off air would be just right for the moment?

Yes Ukraine and the US might stage another MH117, 2 fighters were seen leaving in the colors of Ukraine there was another plane with a silver underbelly, those were seen by eyewitnesses.

Yep but cowed dutch investigators dismissed all that and did not take into report.funny that.dont want to embarass Big Brother?

It’s also a loss of currency – good money to let planes fly over you and someone else gets it if you make them go round.

great news from iran … are the zio satanic terrorists/wahhabbis gritting their teeth and pulling their hair? hope doing so till infinity in hell

A lie is good news. Far out.

Explain yourself man! Or are you just a troll!

I have often thought that Russia might do the same with some western overflights of its territory. Any one any suggestions as to why this might not be possible or a good idea?

i am with you. i can’t for the life of me figure why putin has not done this or that on certain issues. one thing to consider though, about the overflight rights, raise the fee instead of closing the airspace. raise it enough to piss the airlines off, but not raised enough to prevent them from wanting to save the fuel cost.

I don’t know very much about aviation routes, but my uninformed opinion would be to target flights from western Europe to Japan. You know there was a time when Russia permitted the usa to overfly in order to supply troops in Afghanistan.

We aren’t talking about military planes here but passenger planes. Don’t you think you’d be punishing “all the wrong people?”

As far as I know, airspace doesn’t get closed to civilian traffic unless there’s a possibility of conflict below threatening them. (Or state of war you-my-enemy stuff.) I’m pretty sure it’s all set out in some rulebook somewhere – like diplomatic protocols.

Money and really unnecessary public aggravation. I think it would also be termed a form of sanctions and as we all well should now, sanctions not ruled in by the UNSC are actually illegal (unless of course, “America does it.”)

nothing in MSM about this

Now we need Russia to do the same and that will put US carriers out of business on the Asian routes.

Good idea.i did not think of that.

Thanks garga for a primer on shia belief.however,i do know from history that persia in muslim period has killed civilians and has conducted wars of offence.