On February 11th, Iranians took to the streets in celebration of the 40th Anniversary of the 1979 Islamic Revolution.

I bow in admiration to Iran's resilient people who— despite hardships & grievances— today poured into streets by the millions to mark 40th anniv of their Islamic Revolution, which some in the US wished would never come. US should take note: REAL Iranians never succumb to diktats. pic.twitter.com/GqcFKOb6DL

“In a message of appreciation for the epic and significant attendance of the great nation of Iran in the great celebration of the 40th anniversary of the victory of the Islamic Revolution, the President stated, “This significant and informed presence doubled the duty of the authorities of the country, including the government, to pursue efforts to serve the people and the country.”

“The presence of people today on the streets all over Islamic Iran … means that the enemy will never reach its evil objectives,” Rouhani said, adding that the country will continue to pursue its missile programme to defend the country from external threats.

“We have not asked, and will never ask for permission in developing our missile arsenal as we continue to pursue our path to military might.”

During the festivities, many of the demonstrators chanted “Death to America”, “Death to Israel” and “Death to the al-Saud” family of Saudi Arabia.

Lebanon, which said it will not partake in the upcoming Warsaw Conference, organized by the US and Poland and aimed against Iran.

Lebanon says will not participate in Warsaw Conference https://t.co/ep1w2OyH0n pic.twitter.com/oRcZ1o07nU

As expected, the Trump administration used the occasion to attack Iran’s government and progress.

US President Donald Trump and US National Security Adviser John Bolton both strongly attacked the 40th anniversary, saying they have been nothing else than 40 years of failure.

After 40 years, the Islamic Republic of Iran has failed to fulfill its promises to uphold and safeguard the rights of its citizens. The 40th anniversary of the Iranian regime only serves to highlight four decades of failure and broken promises.

Bolton also posted a video, addressed to the Iranian Ayatollah, saying he is to blame for “terrorizing your own people.”

A message to the Ayatollah of Iran: "For all your boasts, for all your threats to the life of the American President, YOU are responsible for terrorizing your own people." #40YearsofFailure pic.twitter.com/gpCL1FeLis

The POTUS posted a banner, with the caption “40 years of corruption. 40 years of repression. 40 years of terror. The regime in Iran has produced only #40YearsofFailure. The long-suffering Iranian people deserve a much brighter future,” which was also translated in Arabic.

After 40 yrs of wrong choices, time for @realDonaldTrump to rethink failed US policy.

Sharmine Narwani also reminded that John Bolton’s vows did not turn into reality:

On the 40th anniversary of the #IslamicRevolution, I can't help but recall @AmbJohnBolton's promise to MEK terrorists: "before 2019 we here will celebrate in Tehran,” and "Ayatollah Khomeini’s 1979 revolution will not last until its 40th birthday.” Quit your job, Bolton.

Congratulations to Iran.
Me and Bolton now predict a US victory parade through Tehran will happen before 2020 run out, and all Iranians will bow and look up to Americans because US gave them freedom.

40 years of US imperialists’ FAILED attempts to get Iran back under their control. =)

The Shah times seemed cool from the outside to me, but only when considered in a superficial, visual sense (mostly through the MSM). Too bad the Shah was a paranoid psychopath tool of the CIA and secretly sold Iranian crude to Israel. Since Persia has been around at least 5,700 years longer than the U.S., I expect Iran will do fine. My country? Well…

“The POTUS posted a banner, with the caption “40 years of corruption. 40 years of repression. 40 years of terror. The regime in Iran has produced only #40YearsofFailure. The long-suffering Iranian people deserve a much brighter future,” which was also translated in Arabic”

It’s so depressing to see that so many people, even those who supposedly follow international events closely are still so clueless about Iran that they don’t even know Iran’s language is Persian, not Arabic.

They are not clueness, they just thought the posters referred to the USA.

If going to bemoan ignorance…at least be correct. Iran speaks mostly farsi no?

Yes Iran’s official language is Persian/Farsi and is spoken by all Iranians. Arabic is a very small minority language spoken by less than 2% of the population as a second language.

Ok.persian and farsi is kinda the same ok thanks for the clarification.

His post was in Farsi (Persian is just another name for Farsi, it is the exact same language), however the author of the article incorrectly thought the post was in Arabic probably because he’s not aware that Iran’s language is Farsi.

40yrs of failed attempt by Zionist to bring iran and islam to its knees.40yrs US/Zionist was afraid of pure islam which iran bought with the help of muslim. and more to come for Zionist war khabyer part 2 soon which will wipe put Zionist and whabhi thugs totally from the earth

The Yankers are so pathetically childish, they drive me mad. 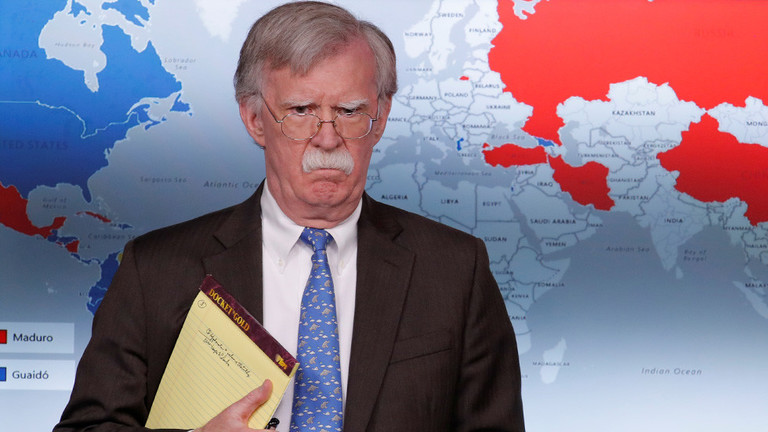 well well, bolton is a luna bin incarceration waiting to happen . stark raving mad and foaming at the mouth if and when you say iran, or syria and venezuel. how did it happen that a stark raving mad person got into the position he is occupying .- hitler supposedly foamed and chewed away at the nearest carpet when things didn’t go his way and I suspect that stark raving mad bolton is chewing away on curtains or some such soft stuff, not to damage the dental work.