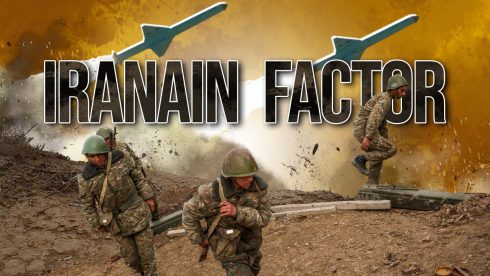 For weeks, Iran has been concentrating troops and heavy vehicles on its border with Azerbaijan as tensions continue to mount. Participating in military exercises on the Azerbaijani border include several infantry, special forces and armored units, as well as several fighter jets, helicopters and missile systems.

The “Conquerors of Khaybar”, the name given to the military exercise, is a reference to a battle fought by Muhammed, the founder of Islam, against the Jews in 628 CE. This is an obvious reference to the close relationship Azerbaijan has with Israel. Not only does Azerbaijan acquire Israeli weapons, many of which were used against the Armenians of Nagorno-Karabakh, but Mossad has a legal right to operate in the Caucasian country as part of their spying and espionage acts against Iran.

In response, the Azeris announced joint military exercises with Turkey between October 5 and 8, dubbed “Indestructible Brotherhood 2021.” Officially, the maneuvers are to improve cooperation and coordination between the land forces of Turkey and Azerbaijan, but it’s also a supposed message towards Iran that Azerbaijan is not alone. In fact, Azerbaijan is so confident that a lawmaker even quipped that Pakistan’s army would invade Tehran if it made any hostile move against Baku, while another lawmaker threatened to cut Iran’s tail.

Tensions between Iran and Azerbaijan have been building for months now, with no signs that relations are improving or stabilizing. On October 5, Azerbaijan closed down the office of the Iranian spiritual leader in Baku, a significant move when remembering that only Iran, Azerbaijan, Iraq and Bahrain are Shi’te-majority countries out of the 50 Muslim-majority countries across the world.

Closing down of the Iranian spiritual leader’s office in Baku was in response to Iran closing its airspace to the Azerbaijani Air Force. This is a major move as flying over Iranian airspace was the most direct route to carry military reinforcements and supplies to the Nakhchivan Autonomous Republic from Azerbaijan proper. Both Azerbaijani territories are separated by Armenia’s Syunik Province, hence why the Iranian flight route was needed. However, for Azerbaijan to reach its detached autonomous region, it now must take an extended bypassed route over Georgia and Turkey. The move by Iran now adds extended travel time, something that would be catastrophic if a war broke out.

Moreover, the Supreme Leader of the Islamic Republic, Ayatollah Ali Khamenei, tweeted on Sunday: “Those who, under the illusion of relying on others, think that they can provide security, know that they will be slapped soon.” The tweet also comes as news emerged that Azerbaijan will soon acquire a batch of Israeli-made Arrow 3 anti-aircraft and anti-missile defense missiles.

After rhetorically supporting last year’s joint Azerbaijani-Turkish invasion of Nagorno-Karabakh in a gross miscalculation on the intentions and purposes of the war, Tehran is now exerting pressure on the ongoing attempts to close the trade corridor between Iran and Armenia. Azerbaijani authorities recently announced that Iranian trucks heading to the Armenian capital of Yerevan, in addition to paying a transit fee of $300, will not be able to travel at night, but only during the day. Following the 2020 Nagorno-Karabakh War, Azerbaijan captured a part of the road that links Iran to Yerevan, hence why Iranian Deputy Transportation Minister Kheirollah Khademi visited Armenia on Monday to express Tehran’s financial and technical support for a 400-kilometer transit road linking the Iranian border crossing at Nordooz to Yerevan, bypassing Azerbaijani-held territories.

From the Iranian perspective, assisting Armenia now is also a part of their conflict with Israel, a country that Yerevan has never had good relations with, unlike Baku. According to Tehran, Israel has four bases in Azerbaijan. Even though Israel denies having its own bases there, the Jewish state actually considers Azerbaijan as a part of its peripheral strategy – establishing alliances with countries close to enemy states.

This flurry of exchanges between Iran and Armenia, despite the former strongly backing Azerbaijan rhetorically during last year’s war, is undoubtedly due to the complex dynamics created by Turkey’s pursuit of an ideologically syncretic neo-Ottoman and pan-Turkic foreign policy. The Turks, along with cultural and linguistic affinities, are also motivated to strengthen their relations with Azerbaijan so they can collaborate in the energy field and establish trade corridors with Central Asia.

The confrontation between Iran and Azerbaijan can easily involve not only the Turks, but also the Israelis in a more meaningful way beyond weapon sales and intelligence exchanges. Tehran is taking a huge risk by threatening war with Azerbaijan as it could reignite the conflict in Nagorno-Karabakh and draw in Armenia, Turkey and perhaps even Pakistan.

At the same time, despite all of Azerbaijan’s bravado and confidence after defeating a weak Armenian military with the assistance of Turkey and Syrian mercenaries, it is unlikely that Ankara will allow a war to occur as they recognize and understand Iran’s military might. While Baku is full of arrogance after last year’s victory, Turkey is struggling to keep its economy afloat while maintaining its various military operations across the region. For this reason, it is unlikely that a war between Iran and Azerbaijan will breakout as Turkey, which has de facto control over large parts of the Azerbaijani military, will not allow its ally to provoke a war in the same way they did with Armenia. Unlike Baku, Ankara understands that Iranian power is incomparable to Armenia’s.

Contradictory information. If true it would make sense for Iran to host a military base on Armenian soil.

You can’t “host” a base on someone else’s territory. Armenia can host an Iranian base on it’s soil is what you meant. But this is unlikely to happen since then that would trigger American savages to demand regime change.

Fine genius. Despite understanding my intended comment, you can play ultra commenter here on SF.

BTW, my guess is you are a pathetic diaperhead or five “eyed” degenerate to que to a specific comment. Typical british or allied arrogance.

lol, you carry a lot of anger and frustration in you. A normal person would welcome being corrected but a common Israeli agent is only capable of rage and weak insults. :D

You got it Glock! Block has been outed a deep-cover Israhelli troll tasked with disturbing and antagonizing on this comment board. Reminds me of a similar f*ckhead that used to go by the moniker Arklight on the blog Syrian Perspective up to a few years ago.

Who gives a rats arse what American savages demand?

What do you think Shias of Azerbaijan would do? They hate how the government is close with Israel, you think they’ll help Iran against their government?

If it was Sunni-Shia war it would be easy for Sunnis to win because they have the 90% of fighters and the support of the West. But it is not that way really. You see that in the past wars with Iraq, Turkey and Pakistan supported Iran. Syria and Algeria were also close to Iran. Iran supported the Egyptian MB and the Sudanese MB and its war on Darfur.

how and when did turkey and pakistan support Iran against Iraq? Could you elaborate please?

During the wars with Saddam and ISIS and PKK.

Could you provide some news articles of turkey and pakistan helping Iran against Saddam, ISIS and PKK?

Operation eagle claw was a CIA attempt at extracting hostages from the US embassy compound. The US aircraft/ helicopters flew from the USN ships in the Persian Gulf. It ended in dramatic failure. In the battle of Mosul, the Iraqi PMU’s and the Iraqi army destroyed ISIS capital mosul. I fail to find any turkey or pakistan involvement in all this? Doesn’t seem you know much about what yous talking about.

Eagle Claw was an operation by Turks and Iranians with the help of Iraqis and Iraqi Kurds.

Turkmen brigades are inside PMU. And Pakistan supported the operation with weapons.

I meant only Azerbaijan. The Shias there hate their government, I doubt they’ll help them destroy another Shia country. Shias have a strong relationship all over the world, and Iran is like Shia homeland for a lot of shias

Looks like Israel is provoking war with Iran and Azerbaijan. Israel funding Azerbaijan with their weapons to test them out in war and see what Iran is made of.

lol.. What a joke of an article.. Iran herself was the one being delusional but now they know whats up. They felt as if they didn’t know that Azer-Turkey have strong alliance in the region and that goes beyond understanding and this is what we told them before acting tough and now they come back pacifised and all surprised..

Iran didn’t have any problem with Turks and Azeris.