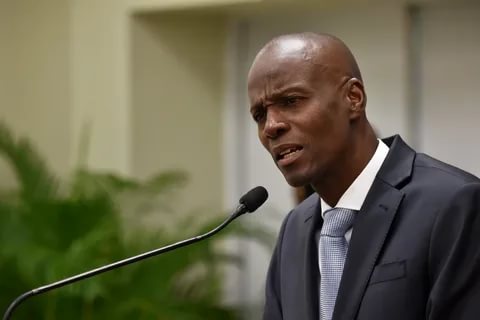 US trying to regain its control over Central America and the Caribbean.

US incursions in Central America are on the rise. New data from the investigation on the assassination of Haitian President Jovenel Moise reveals that US government agents are involved in the case. In addition, there are reports alleging that those responsible for the attack were involved in recent invasion and coup attempts against Venezuela and President Nicolás Maduro. The reasons why Washington is advancing in the region are still unclear, but it appears that the maneuvers are a response to the Chinese and Iranian presence in the Caribbean.

Immediately after the assassination of President Moise, the Haitian police began an exhaustive investigation into the case, which resulted in the capture of many individuals suspected of being involved in the attack, most of them foreigners. The most curious point is that some of the suspects arrested were US citizens – not just citizens, but Drug Enforcement Agency (DEA) agents and informants. Joseph Vincent and James Solages identified themselves as DEA agents at the time of their arrest and were later confirmed as members of the agency’s intelligence service. However, the DEA denies having any involvement in the actions taken by Vincent and Solages, claiming that they both acted on their own in Moise’s murder.

This, however, was just the beginning of investigations into the involvement of US citizens in the assassination. Haitian police then arrested Christian Emmanuel Sanon. Born in Haiti but of US citizenship, Sanon has spent most of his life abroad, returning to Haitian territory a few years ago. He is a Protestant preacher and physician educated in the Dominican Republic. Since returning to Haiti, he has led a major humanitarian campaign, providing medical aid and religious services to the population.

Not only that, Sanon has become increasingly involved in Haitian national politics, becoming an influential popular figure for his criticisms against the local government and in support of radical reforms in the country. His simultaneously humanitarian, religious, and revolutionary discourse has attracted widespread popular support. What led to his inclusion on the list of suspected involvement was his emphatic opposition to Moise, combined with his social influence. And the suspicion does not seem in vain: in Sanon’s residence were found weapons, ammunition, military equipment, and a DEA cap, as well as some shooting targets, suggesting that military training was being carried out there.

In an official speech, the Haitian government is adopting the narrative that Sanon conspired to assassinate Moise because he intended to become the next president. The material found indicates that the American doctor probably received support from abroad and the presence of DEA agents among the list of suspects corroborates this possibility. There is also one factor that cannot be ignored: most of those involved in the case arrested so far are Colombian citizens. Witnesses to the attack on the presidential residence informed police that the killers spoken in Spanish, which led the investigation to focus on apprehending foreigners, resulting in the capture of 26 Colombians.

All Colombians had links with paramilitary militias – in Haiti or Colombia. More than that, during the investigations it was found that at least some of these Colombians were mercenaries employed by the private security company CTU Security. This company belongs to Antonio Intriago, Venezuelan resident of the state of Florida, US, and treasurer of the opposition movement “Venezuela Somos Todos”.

Immediately after the link between CTU Security and Moise’s murder was revealed, the Venezuelan government commented on the case, recalling that the same company was responsible for two recent incidents in the country. In 2019, the company was responsible for commanding the security scheme of an event organized by the Venezuelan opposition, in which the Venezuelan Police intercepted trucks with tons of military material that were being supplied by the CTU to dissidents in what would possibly be an attempt of coup against Maduro. Last year, the same company organized the so-called “Operation Gedeón”, which was an attempt to invade Venezuelan territory through the Colombian border.

Moreover, one of the imprisoned Colombians, who would possibly be the leader of the group, Francisco Eladio Uribe has close links with the Colombian president, having published photos with Iván Duque in social networks. There are also allegations pointing out that Uribe and Duque met in Miami in 2018, when plans against Venezuela were possibly discussed. In fact, it seems that the same agents involved in conspiracies against the Bolivarian government acted against Jovenel Moise. Venezuela’s strong security policy has managed to prevent such conspiracies from being successful, but the weak Haitian state apparatus has not been able to stop the mercenaries’ actions.

The point to be defined from now on is what exactly would be the American interest in overthrowing the Haitian government. What would be interesting in investing so much to put an American citizen – Christian Sanon – in power in the poorest country in the Western Hemisphere? From a strictly economic perspective, Haiti does not seem like an attractive country to invest in coups and regime change operations, but on the other hand, we can speculate on the role of Central America in the plans of the Biden government. Apparently, Biden is increasingly acting as a successor to Trump’s foreign policy, moving from plans for global power projection to a concentrated strategy of action on the American continent.

China is increasingly present in the Caribbean, with a policy of commercial and naval expansion that has been consolidated for years. On the Venezuelan coast, the transit of Iranian ships has become frequent, both with oil tankers and military vessels. Venezuelan Bolivarianism and Cuban Communism were until then the points of opposition to American domination in the Caribbean region. At this point, Haiti was an irrelevant country, but as Moise began to plan a constitutional change and stronger political reforms, the situation became one where Washington did not want to risk seeing a new anti-American government emerge in the region, which could make room for more Chinese and Iranian presence. In this sense, the most likely to have happened is the overthrow of Moise to maintain the status quo of Haitian politics or to create a scenario of instability and chaos that would allow an American “humanitarian” intervention. With this, Washington gains an important strategic base in the Caribbean. In parallel, a colorful revolution began to gain strength in Cuba almost simultaneously with the events in Haiti, which corroborates the American interest in gaining space, demonstrating power, and creating strategic bases in this region, repelling foreign influence and trying to make the Caribbean its geopolitical “backyard” again.

The weak structure of the Haitian state did not make it possible to face the American incursion, but Cuba has enough strength to prevent the triumph of the dissidents. Havana has strong international support, mainly from Moscow, which makes it difficult for the colorful revolution to consolidate. On the other hand, incursions against Venezuela are expected to increase and a new wave of interventionism will begin throughout Central America and the Caribbean. Biden appears to be continuing Trump’s “New Monroe Doctrine”.

All these people can ever do is kill the weakest, most vulnerable of nations and individuals.

They call their soldiers ‘warfighters’ and ‘warriors’ and prove their strength against women, children and unarmed men.

The American Soldier is not the best fighting man on the planet. He is the worst, but the best funded.

The US army is not the most powerful, merely the most expensive.

Hey, Uncle Sam, you want to kill a leader? Try kill Vladimir Putin, or Xi Jinping … see how you get your ass fed to you via a meatgrinder …

Offcourse the US is involved, its murder, who else ????

Jovenel was not popular and the neo liberal colonial policies imposed on the de-facto NGO republic since the Clinton era are increasingly becoming unattainable and explosive. Jovenel, or his successor since he didn’t run for the next elections due to be held in 2 months, could have tried to reanimate the Venezolan Petro Caraib project and/or get closer ties to China and other non US aligned nations to avert an impending total collapse of this NGO run country. What better way to sacrifice one of your discardable puppets and to make use of the subsequent situation to impose a new Duvalier like US led dictatorship to protect the US run slave labor factories on the peninsula?

The Orinoco Tribune is doing a fine job on reporting on this hemisphere: Jovenel Moïse’s Head of Security Traveled to Colombia 6 Times – Linked to Miami-based CTU Security https://orinocotribune.com/haiti-jovenel-moises-head-of-security-traveled-to-colombia-6-times-linked-to-miami-based-ctu-security/

Of course the US was involved. As soon as it happened they wanted to be the ones in control of the investigation so they could write the ” truth ” . Same old story over and over again. The US has had a finger in Haiti when Papa Doc Was in control with the Tonton Macoute using their black magic < voodoo , to control the people. Hilary Clinton had massive hands in the pie around the time of the disasters that struck the island. I think she is still thinking about what to do with the millions in donations and how best to spend them.. for those on the island of course … after expenses have been deducted and any capital gains have been deposited in the proper accounts .. hers.

Hitler did the same sort of thing when he was at war with the world. US warmongers, who are a blight on humanity, have a war planned with Russia and China, and possibly Iran, and they want to secure beyond their borders and use the resources of the country they invade or usurp. Haiti sits on the point where two or three fault zones meet, so maybe there is a special resource in the ground beneath their feet?

The very fact that these mercenaries and murderers have been apprehended so quickly bodes well for the country. It seems the spirit of President Moise is still alive and kicking. The people of Haiti learned the twisted mind of washingtub via the clintons. The world has a very public display of the lengths the regime in america will go.

The problem with war against Russia, China or Iran? Attack any one country, the other two are immediately involved. In addition their is immediate support from at least another 20 nations.

This why the west can only soil themselves while they imagine partitioning Eurasia.

After arresting several american citizens and numerous colombian puppets, why on earth would Haitian authorities call the US in for assistance?

Two billion raised for Haiti after the earthquake stolen by H. Clinton. Of course it was the US. On a side quest; PressTV.ir , can “no longer be found”, does anyone know a different link ?