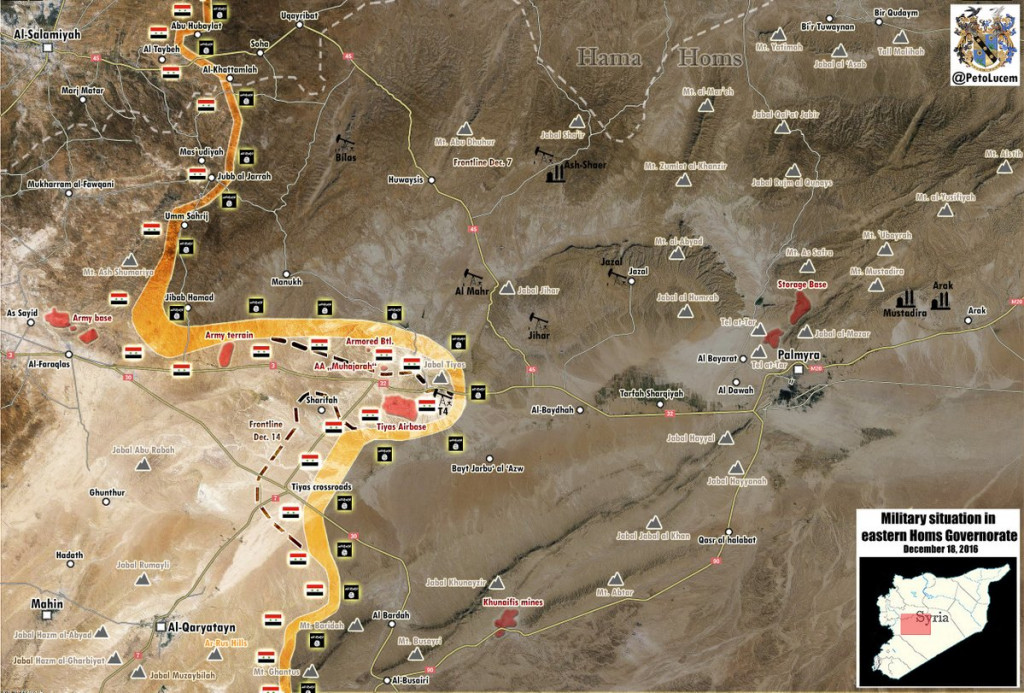 This move allowed the Syrian army and its allies to repel the threat of encirclement of the Tyas Airbase by ISIS forces.

Government forces also made a series of limited counter-attacks against ISIS terrorists along the Palmyra-Homs road. However, without significant results.

Pro-ISIS sources claim that the terrorist group was able to destroy 3 battle tanks, 2 vehicles and to damage 4 battle tanks belonging to the Syrian army in the area. Pro-government sources report that ISIS lost some 4 battle tanks and 10 fighters.

The Russian Aerospace Forces and the Syrian Air Force continued to provide an air support to government forces battling terrorists. Over 50 airstrikes were recently reported.

Meanwhile, the US-led coalition’s airpower also delivered some 30 airstrikes against ISIS units in the area of Palmyra.

Some sources report that Government forces also use the Russian-made heavy flame-thrower system TOS-1A “Solntsepyok” against ISIS in the area: 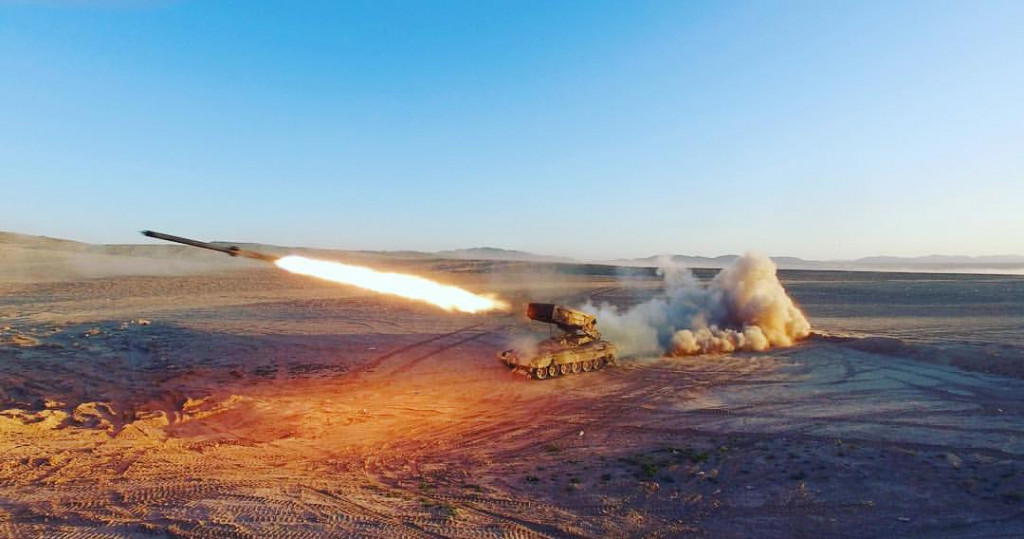 “Government forces also made a series of limited counter-attacks against ISIS terrorists along the Palmyra-Homs road. However, without significant results. […] Over 50 airstrieks were recently reported” I begin to think that ISIS is the most powerful army in the world. You can not beat. USA + Europe + Russia + Syrian Gov. + Iran + Hezbollah + Turkey + Kurds vs ISIS 50 airstrieks and there is no significant improvements! Compared to Hitler was a joke

Turkey switched sides since US trying to overthrow government. Turkey is actually a 3rd side.

and of course Israel, which for some reason, often is forgotten. Didn’t ya folks hear about the “biblical event” happened a week or so ago? the IDF was about to engage ISIS at a place on the border, when an “atmospheric phenomenon” came down and obscured the view, right over the border. I would call it “battlefield obscurants”, but the Israeli press decided it was the helping hand of god, protecting the israelis from the jihadists.

They, ISIS, are using guerrilla warfare, suicide bombers, suicide vehicles and have aquired money from oil and human trafic. The Afhganistan Taliban is waging guerrila warfare for 15 years now and they were facing Pakistan and USA army together. The Colombian Guerrilla FARCS lasted for 50 years. The Tamil Tigers in Sri Lanka rebellion also lasted for decades….

so does the New People’s Army of the Philippines already 48 years old.

You also need willing boots on the ground, bombing does not equal conquering.

@misternn:disqus You are totally correct Sir! @disqus_LiJ7mIkBEF:disqus If u had geography lessons in school u should know the differenc between Palmyra and where the Taliban fights… We are talking about Palmyra and we ALL have to admit, that ISIS are maybe not the best, but the most motivated fighters in Syria!!! It’s a shame that syrian soldiers can’t and don’t want to die for their home country…… @disqus_1z5x7WCWNt:disqus Maybe ur right, but in the future the Allies of ISIS will quit…. and if we see ISIS in Al-Bab and Palmyra they are fighting like Nazis in their last year.

give me a break, the USA is defending and supporting daesh. Wow 30 US air strikes. did they hit anything, yet 1 A10 killed 60 Syrian troops by accident or so they say.

Either ISIS is a powerful army with serious boots on the ground. In which case just bomb them from the air. Or…it is a guerrilla army with guerrilla tactics, in which case you should just be able to drive straight into Palmyra in a convoy. Non of these scenarios match what i see and i question we are being told the truth even on this site.

US is helping daesh in Palmyra area. US wants to control the land and not allow Syrian control.

It will be interesting if DJ pulls the plug in Syria and allows Syria to defeat daesh. US will try to maintain permanent foothold with Kurds in Syria and another foothold in northern Iraq with the Sunnis. Thin line since daesh are Sunnis.

It has come to the point where Aleppo victory in spite of its character and speed, simply fades away considering the speed of this re-conquest (which makes it even worse, cause recent history was not analysed and understood) by ISIS/IS/DAESH/what-ever-the-f… Equally there should be questions asked to the Syrian Generals, are they seriously in the business of defending their Country? Cause this was in the first place a strategic failure and top brasses are responsible (yes, them fat old men looking to retire on their fat pension) not the brave young men sacrificing their life to the survival of the Motherland. Get in some competent people instead of the party aligned ones but incompetent for duty…

I can only hope that the Syrian army and it’s allies can place a Blocking force at As Sukhnah and then sweep through the ISIL forces and destroy it’s people and equipment from the Tyas air base.