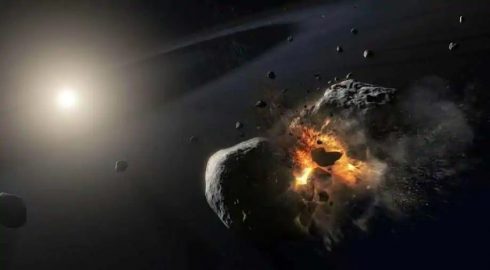 On August 8th, the National Aeronautics and Space Administration (NASA) announced that it would reexamine the nicknames that people give to cosmic objects.

“As the scientific community works to identify and address systemic discrimination and inequality in all aspects of the field, it has become clear that certain cosmic nicknames are not only insensitive, but can be actively harmful. NASA is examining its use of unofficial terminology for cosmic objects as part of its commitment to diversity, equity, and inclusion.”

For example, NASA would stop calling planetary nebula NGC 2392 the “Eskimo Nebula”, because “Eskimo” is widely viewed as a colonial term with a racist history, imposed on the indigenous people of Arctic regions.

NASA will also no longer use the term “Siamese Twins Galaxy” to refer to NGC 4567 and NGC 4568, a pair of spiral galaxies found in the Virgo Galaxy Cluster.

In the future, NASA would only use the International Astronomical Union designations in cases where nicknames are inappropriate.

“These nicknames and terms may have historical or culture connotations that are objectionable or unwelcoming, and Nasa is strongly committed to addressing them,” said Stephen Shih, associate administrator for diversity and equal opportunity at NASA. “Science depends on diverse contributions, and benefits everyone, so this means we must make it inclusive.”

Associate Administrator of NASA’s Science Mission Directorate, Thomas Zurbuchen said that NASA’s aim was that all names are aligned with the values of diversity and inclusion.

“I support our ongoing reevaluation of the names by which we refer to astronomical objects. Our goal is that all names are aligned with our values of diversity and inclusion, and we’ll proactively work with the scientific community to help ensure that. Science is for everyone, and every facet of our work needs to reflect that value,” he said.

NASA will be working with diversity, inclusion, and equity experts in the astronomical and physical sciences to provide guidance and recommendations for other nicknames and terms for review.

This is because, allegedly, nicknames are often more approachable and public-friendly than official names for cosmic objects, such as Barnard 33, whose nickname “the Horsehead Nebula” invokes its appearance.

“But often seemingly innocuous nicknames can be harmful and detract from the science.”

Of course, the internet immediately jumped on the band wagon, and as such “The Official NASA Guide to more inclusive space terms” was born.

It should be noted that this is not an official piece of documentation, obviously, but it does provide some good ideas, one could argue. 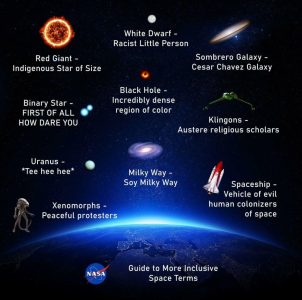 Black monkey, black criminal, black gun, black HIV, black LSD. There is plenty of possible names based on stats from real world ;) Thx God 80% of black US population is against BLM and Antifa terrorist and they dont care about these “black” and “diverse” stupidities, so it shows they are really clever, but just those 80%:)

US was built on racism and slavery and now it has gone to the high heavens.

USA wasnt based on racism and slavery butwhite emmigrants from Europe.

You of course also ignore there was slaves in the world 1000s of years before USA and even Indians there had slaves.

Fog of War
Reply to  guest

Name me one group in Africa that didnt practice slavery ?

My neighbor stole something, then I can steal also?

And genocide of local population.

By reducing the whole discourse of racism to a semantic question, they will be able to easily procrastinate true structural racism, this was a stroke of genius and as such it must be recognized, even Macchiavelli would not have dared to go so far.

Why is space black?! That is racism! Lets make petition to paint at lest 1/3 of space in white :)

No worries, there’s a plan to eliminate the white word from every language’s vocabulary…

Or… the life of colored matter matters! …

You mean ‘hole of color’ instead of black hole…

And the White Dwarfs – Priviledged Dwarfs.

Joke aside, racism, regardless of skin color or the ideology of those who support it, is one of the most despicable thing on earth … and among white (re)turds there are also a lot of non-whites (and here I would include many jews or arabs), left-wing supporters or islamists who are very, very racist…

” Joke aside, racism, regardless of skin color or the ideology of those who support it, is one of the most despicable thing on earth ”

I guess you’re not aware what happens during war. Racism one the most despicable ? Foolish .

Well, racism was practiced trough out history by all races, ethnicities, tribes, large groups of people, white, blacks, jews, muslims, etc…some, because of their religion (muslims) or ideology (leftists), are still practicing it!…

Actually most modern slavery is practiced in Africa by black Africans. Ironic isn’t it ? BLM indeed.

Yes indeed…a form of modern slavery is practiced by some islamic countries in the Arabian Gulf where qatar, an active islamic terorrism founding and promoter all over the globe, is the champion!…

…’the bulk of the supply came from the Nigerians. These Nigerian middlemen moved to the interior where they captured other Nigerians who belonged to other communities. The middlemen also purchased many of the slaves from the people in the interior . . . . Many Nigerian middlemen began to depend totally on the slave trade and neglected every other business and occupation. The result was that when the trade was abolished [by England in 1807] these Nigerians began to protest. As years went by and the trade collapsed such Nigerians lost their sources of income and became impoverished’…

You are on drugs, again…

I was just trying to nice.

Well, I didn’t want to point out the effects, just the cause … but if you kept talking …

Oh, so NASA has moved on from their agenda of making muzzies feel good about their stupid, made-up religion. Good to know.

i’m waiting for an announcement to move this libtards to a special planet for them: “Wakanda”

This is a plus double good article.

U.S. is sinking fast… Get out till you can…

hahahahaaha US has totally lost its mind

The jokes just keep on writing themselves here in the Land of the Queer and Home of the Slave.

in order to remedy their racism amerikans will appoint non white janitors to be physicists, mathematicians in their space agency and universities—impoverishing even more their already farcically censored academia

Somebody asked eskimo people are they offended by this? I guess, they are not offended at all.