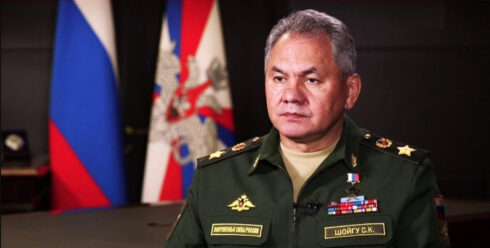 On September 21, Russian Minister of Defence gave interview to the Russia 24 TV channel.  He commented on the ongoing military operations in Ukraine and provided details on the partial mobilization in Russia declared on the same day by President Vladimir Putin.

Sergey Kuzhugetovich, how would you describe the general situation in the Armed Forces of the Russian Federation today?

How are things going in Ukraine now?

In fact, there is going a big, difficult combat work that is being done with honor by our servicemen, the Luhansk, Donetsk People’s Republics and other units and volunteers who are participate in this operation.

And here, naturally, I cannot but place emphasis that today we are fighting not so much with Ukraine, or the Ukrainian army, as with the collective West. Because the weapons that Ukraine had – it is actually over today. This is a former Soviet weapon. Many of the Young Europeans, especially the zealous, try. They, in my opinion, cleaned everything they had, all the warehouses were carefully swept to give everything.

We are constantly knocking all this out and the time has already come when we are really at war with the collective West plus NATO.

Imagine that they work for them, I will say not “for them,” but against us, in fact, the entire NATO satellite constellation – according to our estimates, more than 70 military and more than 200 civilian satellites. They are working to explore the location of our units.

Well, and then, also the supply of what is called precision weapons. It surprised us that recently they have been trying to hide its number in some way. For a wide range, this may be a secret, but not for us.

We understand why these things are hidden from a wide range of the public. Because more and more often, and more precisely, almost every day we see these weapons hit civilians.

Literally yesterday, civilians died from the strike of such weapons and this is not the first death. They hit hospitals, hit places of mass gathering of people. This, as we believed, is some kind of uncontrollability – in fact, this is absolutely complete control. Control over Western instructors, curators, of whom there are a lot. The last group that arrived from former and current military personnel is 150 people. This, in fact, is completely a command. The Western command is sitting in Kiev, which leads all operations.

Therefore they have a fourth wave of mobilization, almost 300 thousand have been mobilized. And, as you can see, probably through different channels, information resources – this work continues in different directions, which is called: “from the beach to the station” is goes trapping.

And then one cannot but say more about the instructors. But not just instructors, but about mercenaries who are in this environment, and today there are a little more than a thousand of them left there in place. Most of them – someone left, someone died – more than two thousand mercenaries died.

That is, the states from which they came – they actually recruit these mercenaries or turn a blind eye to those who engage in this recruitment.

I can’t help but say we haven’t talked about it for a long time, about our losses… Our losses to date are 5937 dead. And here I cannot yet and over again not mark our guys who courageously fulfill their duty. I can’t help but say about our doctors – out of the total number of wounded, more than 90% returned in formation. These are the guys who went through our hospitals, medical institutions, returned to service and continue to serve.

And here I will again return to what is happening in Ukraine – we continue to fulfill the tasks that are set for us. Yeah, not simply. At times is very not simply. But we will fulfill them.

The President of Russia has made a decision on partial mobilization. Please tell us more – how will it go? Who is subject to conscription? In what quantity? How will work with those called from the reserve be carried out?

You said correctly, – exactly from the reserves. These are not some people who have never seen anything about the army… These are really those who have served, have a military accounting specialty, that is, the specialty that is needed today in the Armed Forces, have combat experience.

And, of course, I immediately want to precede the questions that may arise in this regard – there is no talk of any mobilization, appeals of students studying at universities and there will be no talk under any conditions. Everyone calmly goes to classes, no one will call them, mobilize them.

Naturally, as well as those who serve on conscription. That doesn’t concern them either. They are not subject to any mobilization and direction for a special military operation. Our conscripts also continue to serve, as they did, on the territory of the Russian Federation.

Because we have a huge mobilization resource, that is, the resource of those who served. Those who have combat experience, have a military specialty, we have almost twenty-five million.

Thus, you can understand that this mobilization is partial – one percent or slightly more of the total mobilization resource.

Of course, after they are recruited, they will undergo training or retraining. The combat coordination of crews, teams, departments, platoons will take place, and only after that, exclusively after that, they will go to perform the tasks that are prescribed for them.

Can we talk about a specific number of called reservists?

Yes, of course, 300 thousand reservists will be called up. I want to say right away that this work will not be carried out immediately, but as planned, as I said. That is, it is not provided for here, you know, a “wide-gripping” combine – a sieve to “capture” everyone quickly – no.

I want to say that it so coincided that at the same time, according to our plans, we had to hold mobilization fees.

You know, we used to collect for two weeks or someone for more time in order to restore the driving skills of military equipment. It coincided with this event, the statement about partial mobilization. Therefore, we cancel the planned fees and will be engaged in partial mobilization.

Very important complete information, but the operation is ongoing – what are its prospects?

You know, there may be particular, there may be some deviations in terms of terms and actions. But there is a main, primary task that has been set, and this task is being fulfilled. Naturally, we do everything to ensure that it is fulfilled.

Glad to see Gen. Shoigu confirm what I said earlier: with such a long front line, counter attacks and breakthroughs cannot be avoided. It‘s simply a question of manpower. This will now be provided.

And it was not foreseen? I understood that everything is according with the plan =)) By the way: “General” Shoigu. Best joke forever. Mussolini called himself Marshall, but at least he was a corporal, with military experience…

Russian war protesters were sent from the police station to the military.

The idiots do not understand that their lives belong to the state.

and this permanent drunken bastard needed 7 months to recognise it..?

and when will he learn that imported weapons should be destroyed before they are in action at the front..?

and when will he see that NATO-officers acting against russia are NO friends and should be attacked too?

what fucking bastard-idiots are on top of russia and on top of the army???

keep the frontier to Poland open, do not anything against the western weapons and soldiers/officers and russia will for sure win 🤣🤣🤣😅

Hi guys! Still here? Or you already are in route to the frontline?

Understand that any nato military presence in Ukraine or any reinforcements they may send to Ukraine won’t be returning home to west Europe or North America Ukraine will be their tomb. They will be encircled and liquidated no matter how many they send. Within a short time there will no longer be the support systems in place to allow nato to operate as they have in Ukraine itself they nato will no longer have the ability to function as they previously have.

Russians are too stupid and too slow and too coward for that, as they showed during the last 7 months..

but Putin-fanboys believe in all these fairytales like traps, plans and any other shit coming from Putin and Schoigu 🤣🤣🤣🤣

“Our losses to date are 5937 dead.” Yeah, probably in a day. Does this guy really think ONLY 6000 Russians died in this war? To be fair he’s addressing inept braindead Russian public and Southfront Russian sympathizers who have have no clue what is going on and just gobble up this untrue shit

That seems quite a “small” number, yes. But as many, even Ukraine soldiers, say, the fired shells are 1-10 (or similar figures) – so the Kia-numbers should have a similar ratio (at least after the first mobile month). And I don’t think that there over 100k Ukraine KIA – at least I humanitarily hope so..

silly anus bean
Reply to  based

too much crack in Langley—nobody believes lgbt amerikan based

Of course, the 3-day special operation is after 7 months still going completely according to plan.

Is that said in this interview? 🤔

Apparently the ruskies are shitting their pants so badly now they’re begging Europe to take them in and invade their other countries too. Vladimir Putin turned Moscow into a chaotic shithole.

mummy rented your anus to uncle Jeb too many times

Putin, this fucking idiot is still too weak and too coward and too late 🤣🤣🤣

still no actions against ukrainian decision centers full with nato-soldiers..

still no actions against weapons delivered from the West..

still no actiona against ukrainian infrastructure like railway, bridges, electricity to reduce their ability to be fast and flexible..

still no actions against freien fighters in the Ukraine – no, he even allows these bastards to leave russia 🤮

it seems that Putin and Schoigu are fucking traitors, paid to destroy russia..

Kadirov should be president…

The more this conflict is solved inhumanitarily and illegaly (to UN law), the more the future multipolar world will be dominated by the law of the jungle – and Putin doesn’t want to compete with a non-restricted and unpredictable China in such a world. But u are right, too. Handling the conflict the way they do, they have risked to loose the multipolar world before it started…

so, you just realized your country is fighting collective of wester nazis, why not decapitate kyiv headquarter, western’s intel satellites? what do you wait for while your service men die in the front?