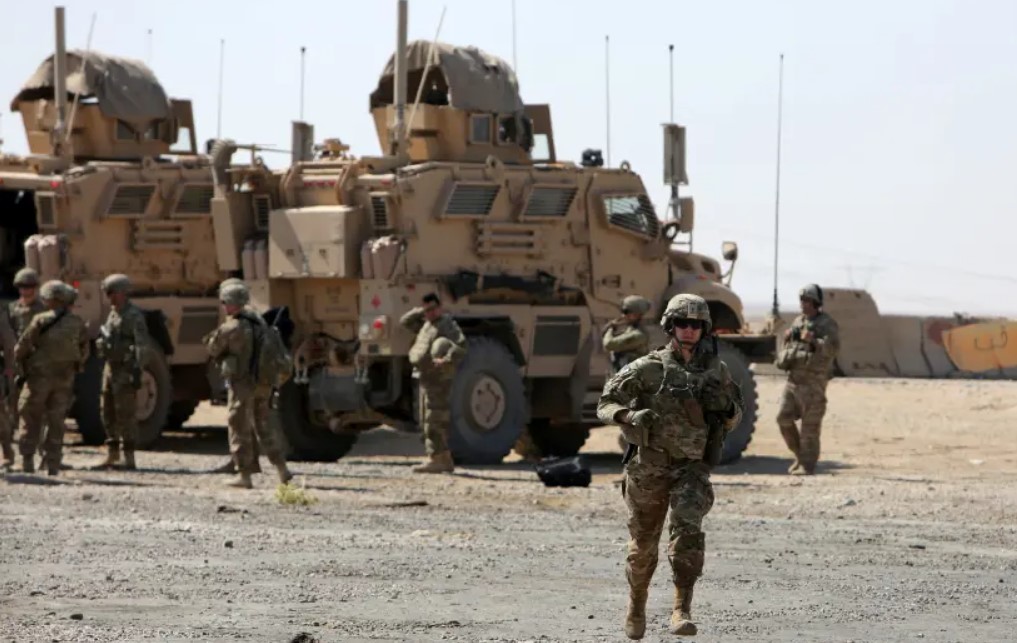 On April 1, a convoy carrying logistic supplies and communication equipment for the US-led coalition came under attack near the Iraqi capital, Baghdad.

According to the Sabereen News, the convoy was hit by an impressive explosive device as it was passing in the district of Abu Ghraib to the west of Baghdad.

“The convoy, which was heading to Ain Assad Base, was subjected to an indirect fire attack.” The Telegram channel, which is close to Iranian-backed groups in Iraq, said in a post. “The operation caused damage to a GMC truck belonging to the so-called coalition, without resulting in any human losses.”

A mysterious group identifying itself as the International Resistance claimed responsibility for the attack, according to Iraqi sources.

The International Resistance is one of many small armed groups which attack US supply convoys and bases in Iraq on a regular basis. These groups adopt a pro-Iranian ideology. Their attacks are a response to the to the assassination of Abu Mahdi al-Muhandis Deputy-Commander of the Iraqi Popular Mobilization Units and Iran’s Quds Force Commander Qassim Soleimani.

So far, the US-led coalition has failed to stop the attacks on its supply convoys and bases in Iraq. In the recent months, the number of attacks increased. Despite the serious threat posed by pro-Iranian forces, Washington doesn’t appear to be planning to pull its troops out of Iraq any time soon.

The impressive expulsion caused damage to the truck with no human losses. That’s is not impressive. Impressive would be if the truck was obliterated and that they are not looking for the driver as .. no point and would be a waste of time. .In Vietnam the US lost 10,000 aircraft ,planes and helicopters, which incidentally is one of the main reasons corporations pushed to go to war in Vietnam , Do you think the US is going to be worried about a truck here and there getting damaged and the drivers afterwards asking for a bonus so they can get their hearing checked because they can see lips moving but don’t hear anything , well apart from a few bells ringing.

What was the main reason corporations pushed to go to War in Vietnam? 10.000 losted aircrafts? Can you clarify this.

The money to make and replace aircraft , military vehicles , equipment and supplies . It created jobs and massive profits for them. This was discussed in a Vietnam war documentary or The Untold History of America , can’t remember which. Haliburton , vice President Cheney was once the boss of was awarded 39.5 BILLION dollars to supply food , boots and toilet paper at the start of the Iraq war.. out of 138 Billion .. That was just the start of the war.. Any wonder why Cheney was so keen to go to war. JFK was not keen to get involved in Vietnam , which is one of the reasons he was replaced , so the corporations involved in military contracts lobbied very hard to get the war going .

Stay away from me.

I asked was it before infantry or in the course of the War. America lost the War in Vietnam, and was on the verge of monetary collapse because of that. I just knew that JFK was against sending troops, and so on. Big thanks for that Vietnam series, gonna look them up.

It would have been both . They were lobbying hard at the start or in the very early days when small groups of advisors were being sent to Vietnam after the French pulled out and certainly during the war to keep the money flowing to their corporations. You are welcome.

From 75 America is in perishing state. To sacrifice entire generation for nothing, what they are going to do with that money from corporations. You know McNamara and his “morons”, perhaps. To go against 120 million Vietnamese in those titanic jungles, against very resolut and decided enemies, freedom fighters who had enough of French and Japanese colonialism, you must be some kind of fool! You must be out of your mind! They’ve used anything they get, from Napalm to psychological warfare, to drugs, and toxins, but no avail. Vietnam did them instead. I feel sorry for Americans boys 18, 19, 20, 21 years old, lost generation. But I have never seen Vietnamese film on that topic, I’ve seen Apocalypse, funny and not realistic FMJ, Rambo, Platoon of death, etc. but not really horrors of War in itself. Perhaps yoi knkw that Pol pot was instaled there in Cambodia by CIA, and Vietnam did them as well, and keep them occupied until 1991 or so. There are so many stuff to talk about this particular topic and American war crimes across the world.

I have to agree with you. At that time I was very pro America and Vietnam war. How times change.. There have been doco’s with both sides discussing their roles and events , sometimes both sides of a particular battle which gives an interesting perspective, I have seen so many that I get confused on which was what.. I just looked and found that Peter Coyote narrated series. total of 12 , looks like they are not in correct order . This one might be episode 2 as I can’t see 2 in the list. Just a matter of going to 1 first then back to this one.. If this doesn’t come up with the list of 12 then just search Vietnam war Peter Coyote. Film by Ken Burns. There was a doco that might have been the Untold History of America 10 or 12 episodes that talked of after the war there were those that blamed the loss not on the facts but that it was the unlimited access by the press showing on TV every night . That started the control of the press by any means which usually started at the owners or editor level as to what can be shown. All wars after that only allowed “approved” press too accompany them and get access to the war as long as they showed or reported what was approved. Embedded I think they call it. Anyone else was on their own and at risk of being shot especially if making reports not liked. The America of today or even the last 30 years is not the same one of the 2nd WW era.. It is all about controlling the world and being THE BOSS.. Anyway must go and if I can find or remember ones with Vietnamese side views will let you know. I probably saw a lot on the History Chanel so might have a look when I have time.. Yes those movies are certainly not real although I had just got out of Africa after 5 years and saw Apoc Now.in the theatre. That scene where he is in the boat going down the river and the Viet Cong open up from the river bank, I was on the floor before I knew what I was doing.. That was real for a second or two.

If they can’t conquer the country by military means they will go for sanctions, revolutions, insiders, those that corrupt country from inside out, etc. Once I watched Vietnamese part, side of the coin, and privates who were young back then, still seem very naive. A guy said, America must have mistaken us for a rich country, that we have lots of gold, or something like that. Those are his words. Colonel, who was older, and was a mere officer back then was way wiser, talking about battles with Americans in the jungles and days long starvation, absolute devastation of everything. Only one animal was alive, a monkey that was on the barren tree, because everything else was burned and destroyed, and the were hungry, but he didn’t alowed them to shoot, is it because of that animal or because of that parricular position, I’m not sure. He said they traveled by foots for days in sandals to reach that place of interest, and defend it from Americans. Take a look at those who are really affected, ocd, depression, panic desorder, ptsd. Those were teenage boys. Talking about Americans. Those who were there and haven’t seen fight being cooks, or radio operaters, maybe artillery on mortars are in better state. Anthony Peck, aon of Gregory is some kind of hippy guy with those ear flaps and earrings is a one in charge for Vietnam veterans entire Los Angeles. Maybe not metro area, but maybe city. That one doesn’t looks very affected to me, he was artillery guy. I’ve been in War my self and you feel like some heavy machinery equipment just been run over you, and that goes on and on for years. No Beverley hills kids were in Vietnam, nor in modern Wars, only middle class and poor ones. Take look atxthat real horror gi junkie and that Puerto Rico guy who was recruited in Vietnam. WAR IS HELL! Only admired by those who have never experienced it. WAR IS HELL. I’m was younger than you, but I know very too good whay I’m talking about. Facists country must be in constant state of war to survive. That is what I’ve learned from my Law school. ‘In 1965 Vietnam seems like just another foreign War…’ take listen to that song, Paul Hardcastle 19. In Vietnam he was 19.

So very true. I think in Vietnam only 1 in ten actually went out a did the fighting. The rest were mostly base camp hero’s. I can respect those that went out and got dirty as that was a nasty war.. War is admired that have never been shot at at close range . That is for sure and those that haven’t been there are such big hero’s such as Iron Zion. My experience was those that talked as he does have never been there and when they got their first taste were the ones crying for mummy. The ones I trusted were the ones that said they haven’t experienced it yet and were afraid to let the side down . They didn’t.. I know that song very well . and there was another Australian one ” I was only 19. I remember when the first Iraq war was about to start and a young bloke told me ” It will be great because they made great music during the Vietnam war and was looking forward to the great music that was to be made with this war.. Well he was right on one point , Vietnam did produce some very good music but it took me awhile to get my head around his thinking.. To be a foot soldier now with the equipment they have to kill you is a nightmare , frightening.. It seems those that have experienced war up close and personal are those that are most against it.. Politicians that are for war should be the first in the front line. https://www.youtube.com/watch?v=mGDhzVi1bqU

Yes, I known that Australian song. Sadam was theirs guy who was to destroy Iran, since he didn’t did homework well, only thing was to lure him into Kuwait and then that was a bait, a casus beli to mercilessly attacks Iraqi infrastructure and atomic shelters. I bet you can’t find those horrors and terrors on youtube from Iraqi shelters. But this is yet another story.

All the lessons of honest or unimpeded reporting of the Vietnam war have been learnt and applied in the US’s new wars. Do you really believe the ultra Low US and Iraqi casualty figures as reported by the US? Really?

Let’s hope the locals give these convoys a wide berth and let karma do its thing. The big attack on Iran via neighbouring states has stalled. The US won’t get the victory and the isreali apartheid regime will not get the land.

US forces should leave while they can. They didn’t find their mass weapons of destruction or their supergun. They found lots of gold and oil though and then outstayed their welcome.