The Ahrar al-Sham, Jund al-Aqsa and Jabhat Fateh al-Sham terrorist groups have clashed in northwestern Syria. A large number of terrorists of all the groups were killed and wounded. 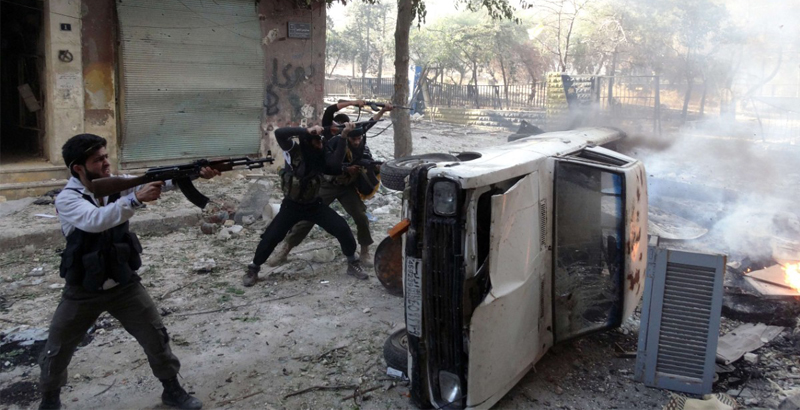 Fierce clashes erupted between terrorists of the Ahrar al-Sham, Jund al-Aqsa and Jabhat Fateh al-Sham (previously known as the al-Nusra Front) groups in the town of Iblin, located near the al-Zawiyeh mountain in northwestern Syria, the ARA news agency reported. As a result, a large number of terrorists of all the groups were killed and wounded.

According to the news agency, heavy fighting between terrorists of the rival groups of Ahrar al-Sham and Jabhat Fateh al-Sham also took place in Qamaynas town, located near the town of Ahsam. Al-Nusra terrorists managed to take full control over Qamaynas and Ahrar al-Sham’s positions.

At the same time, a prison in Qamaynas town, which was under control of Ahrar al-Sham, was stormed by Jund al-Aqsa terrorists, who managed to capture and take away from there a Turk, who was then handed over to the Turkish intelligence service. The group also detained a number of Ahrar al-Sham terrorists, including the group’s security commander, Abu Bakr Abadita.

On Friday, clashes between the Ahrar al-Sham and Jabhat Fateh al-Sham groups also intensified in the towns of Bara and Iblin, located in Idlib province, as al-Nusra terrorists killed Khaled al-Adel, a senior commander of Ahrar al-Sham, in Kansafra town, located on the Zawiyeh mountain in the southern countryside of Idlib. According to reports, dozens of terrorists of the both sides were killed and wounded.

Reportedly, the Jabhat Fateh al-Sham group won the field in the most part of areas of the fighting against Ahrar al-Sham, as well as captured the enemy military positions on the Zawiyeh mountain.

Good news. Let they kill each other as many as possible.

Nah. The best thing is if Nusra win and subdue all and then run the show officially instead of unofficially. Then they are 100℅ illegitimate and nobody can be expected to let them keep Idlib, or anything else.

Smart plan! As long as there are socalled moderates around the West can still play them up. With only Al-Nusra around that fiction becomes untenable.

Clever plan to bus them all to the same point so they kill each other.