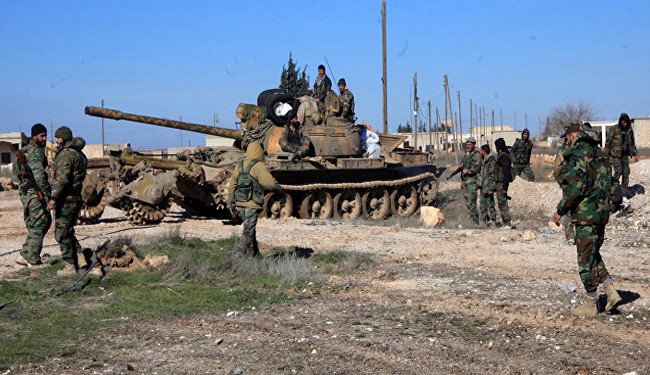 The Syrian army, the National Defense Forces (NDF), backed up by Russian warplanes, have repelled an ISIS attack on the village of Sharifah near the strategic government-held Tyas Airbase in the province of Homs. Clashes were also reported near the T4 Station and in the area of Jabal Tyas northeast of the airbase.

There is no confirmed information about casualties of the sides.

Meanwhile, the Russian Aerospace Forces have reportedly targeted an ISIS oil convoy near the Arak gas fields and a number of ISIS tactical units east of the ancient city of Palmyra.

ISUS battle is tougher than expected! Continue to degrade reserves on highway with air strikes. It’s good open country. Better to fight them here. A battle of high attrition against ISUS personnel and vehicles. They will hold line until all reserves are exhausted? .

“Targeted an ISIS oil convoy” , beauty , don’t let them have a dollar . Before Russia backed up Syria , when the Kurds took Kobane in Iraq , they came across

some ISIS ledgers . ISIS had banked 2 billion US dollars in the previous 2 years , running stolen oil up to Turkey . Those oil fields belong to Syria , and her soldiers deserve a pay raise .

Something is not right with the battle in tiyas. ISIS has sustained their assault on tiyas for a month and you can’t just say they’re being supplied with local oil wells. This relentless assault requires huge ammunition consumption, and ammo has to be sourced farther away from raqqa. How are the syrian and Russian air force missing these supplies? They must be getting past aerial reconnaissance somehow to continue this long.

Does ISIS have a major weapons depot nearby? Or are the SAA not really focusing on this battle and running surveillance elsewhere?

ISUS does not operate like a conventional force. Their basic unit of combat appears to be a squad of 12. They are very flexible in putting together a larger force and very mobile. Daesh uses very little heavy ordinance, so their is no need for many tons of shells. They prefer speed and surprise, and don’t forget the VBIED. Many have a problem coping with these tactics, take Al Bab for exe. Their supplies and munitions are probably kept spreed out, mobile or in small caches in buildings. This is why they are so resilient.

The good news is ISUS is being pressured on many fronts, and their strength is in decline (no longer have a good supply of recruits to replace loses).

Guess they didn’t mass retreat to raqqa from t4 and sharifah as reported.

It’s all ok though, palmyra will be taken back like it was last march. GO SAA!