Intense fihting is ongoing between pro-Turkey militant groups, supported by the Turkish Armed Forces, and Kurdish YPG forces in the northern Syrian province of Aleppo.

According to local sources, Turkey-led forces attacked YPG units in the villages of Boghaz, Sab Weran, Sheikh Nasir and Yulanli and seized the villages of Barshaya and Jib Al-Dam from the YPG.

Earlier today, the YPG has seized the town of Arimah that had been controlled by ISIS. 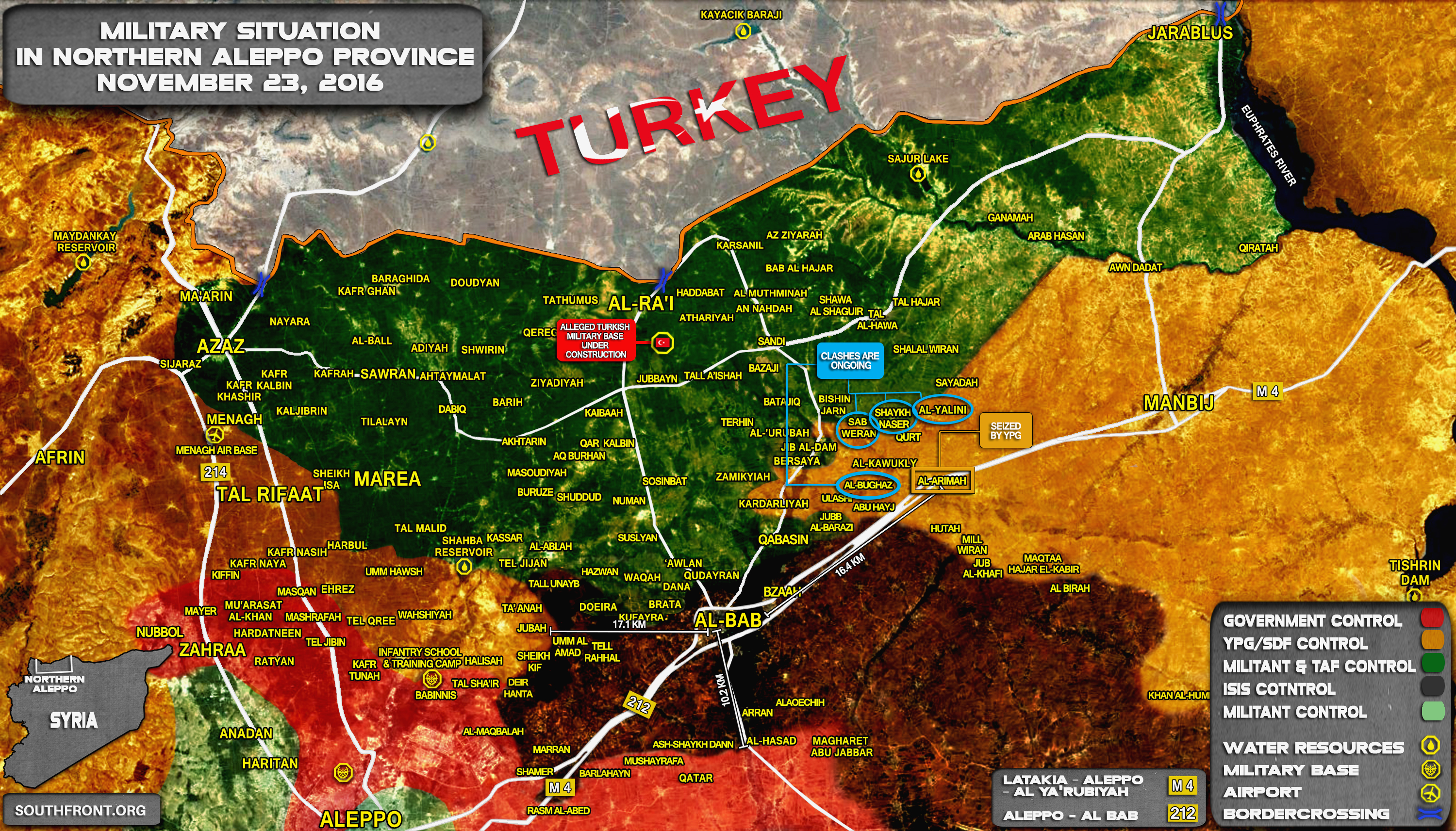 Come on, kurds, wear the FSA and the turks down. Turn this into a quagmire.

Afrin and Manbij kurds should coordinate more and launch simultaneous attacks, better yet at the moment when ISIS is attacking turkish backed jihadis too, this way turkish rmy, sultan murad, ahrar al sham and nourideen al-zenki will not be able to fight against everyone at once and will be forced to abandon some ground. Only way to stop them reaching Al-Bab, ofc if SAA would launch some artillery shells at the terrorists would be nice too ,or better yet, besiege Al-Bab from the south

While the Afrin Kurds have been quiet lately, the direction of the advance from the east points to an eventual linking up with the last direction of advance from Afrin, which was moving along the south of the Shabha Resevoir (and which, I believe extends just a little further NE than is shown, along the heights running parallel to Highway 20.) They seem to be moving to occupy the line of hills between Kardarliyah and the reservoir.

I underestimated the will and capability of the SDF/YPG forces to drive back FSA/Turkish gangs back west of Manbij. Remember that Manbij remains the main objective and Turkey has deployed mixed forces (composition/strength unknown) along the Sajur (Nahr as-Saajoor) riverline in preparation for an attack on Manbij from the north, just 10 km away ! Well done Kurds, just don’t get outflanked.

To Manbij, huh? seems mighty long way to me….

Please look at the map – Turkey has forces massed along the Saajoor riverline, from their jump off point at Awn Dadat is it JUST 10 KM to Manbij !!