Intense clashes are ongoing in the area of Mahr Gas field and Palmyra’s Silos between the Syrian army and ISIS terrorist group in the Syrian province of Homs.

ISIS terrorists launched multiple attacks against government forces near the ancient city of Palmyra on December 8 and continued to develop the advance on December 9.

By now, the only important area seized by ISIS has been Jabal Hayan that overlooks the entrance to the city from the western direction. The Syrian army has launched a series of attacks to retake this hill. However, Syrian troops have not succeed. The battle is also ongoing there. 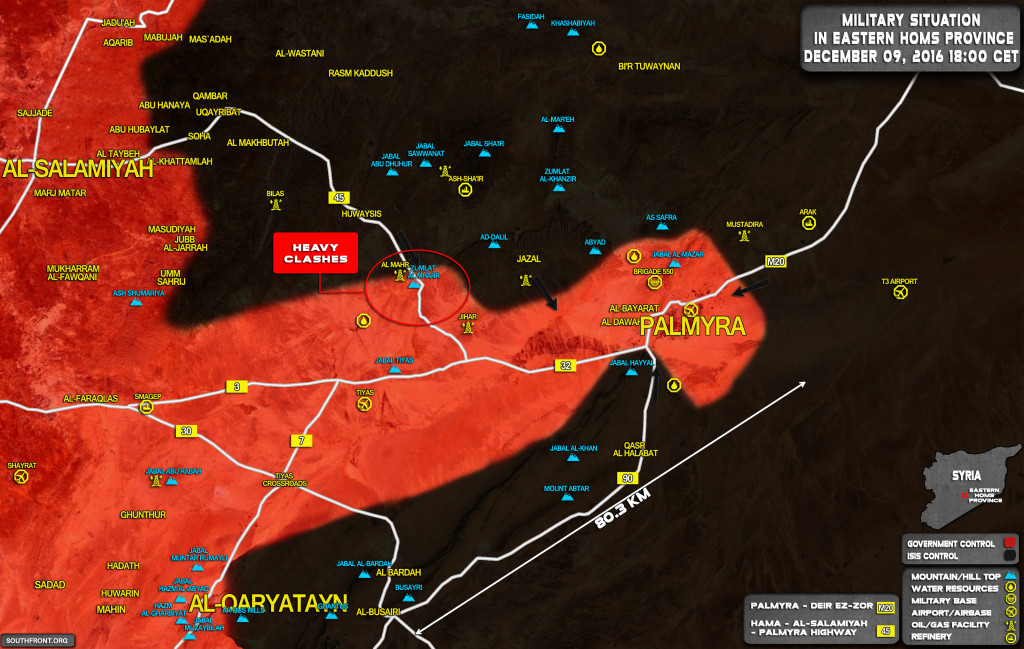 When SAA took Palmyra,they should have expanded their territory.If they did this,there wouldnt be any problem right now.And also why you put NDF on the frontlines with ISIS.In most cases they flee without fighting.They fight very good only in Latakia.I dont think Palmyra will fall,but this offensive will only give ISIS more fresh air.

Trustin… You are partially correct…. But the facts are the maps that we have from Syria do NOT represent the true territory controlled by either the Syrians or the fraud of ISIS… If you look at the area of “ISIS control” it is actually open desert…. The liars in the Jew spew media outlets try to claim that the open deserts are controlled exclusively by “ISIS” and therefore the maps give a distorted perception that this fraud of “ISIS” controls much more territory than they actually have….

Therefore the key to controlling the desert areas is NOT the deserts themselves, but the key towns and adjacent road networks…With the SAA in control of the roads leading into Palmyra, they actually control the area around Palmyra…

Therefore do not be fooled by the maps that portray this big bad “ISIS” controlling so much of eastern Syria… The reality is very much different..

This is correct, but I don’t think these maps are meant to fool anybody. The black area depicts area that SAA does not directly control, and ISUS has freedom of movement in these areas. And boy are they mobile!! Many drove all the way from Mosul to join the party. Only to be met by more accurate bombing.

I’ve been saying for months that the SAA NEEDS to link up Palmyra to Ithriyah, they’ve brought this upon themselves. It’s exactly like Tabaqa; one long, thin salient with ISIS flanking on either side. They’re idiots, not learning from their own failures (or common sense).

It’s all about resources, they can’t be everywhere at once. At the moment Aleppo is the main operation. It was to be expected that the US proxies would attack in other places.

They wouldn’t need to be everywhere at once if they didn’t allow numerous rebel bubbles all over the country. Faffing around in Eastern Ghouta achieving barely anything rather than utilising their total superiority in numbers, weapons, ammo, air support etc.

They left it far too late to deal with them; Palmyra should’ve been secured with the above plan months ago.

When SAA took Palmyra they immediately redeployed forces in the other fronts where they were hanging by a thread.

It’s harder to hold areas in western Syria because US/UK forces cross the border from Iraq and Jordan at will. This war will continue until there is a change in US foreign policy, even then the US will hold a grudge for a very long time, they still persecute Cuba.

If saa knew they’d be holding static positions they should have laid mine fields, foogas, directional mines, obstacles, etc along the front of the lines then followed up with a second and third line of defense to have places ready to fall back to if needed. Hesco baskets and concrete jersey barriers do well for slowing or stopping vbied attacks. Not sure if enough in the ndf understand about proper defense but if not they should have people put with them who do for some on the job training of sorts. I’ve never seen any layouts of Syrian defense positions on paper but I wonder about the thought put into them with them being pushed back so far and often.

very wrong. At times (most of the times actually), you expand the area for defensive reasons. Because when you shift phases you need your forces anchored to the terrain, hence when moving you stop where the terrain allows better defensive positions. Also you seem to totally forget that having some more depth allows you to fall back and reorganize the defence, without having the ragheads step into the city as soon as they show up. Seems to me your another of those who just have to criticize the SAA side, exploiting the ignorance of people. If there is an unknown is about the surveillance and the fact that ISIS units were able to launch an “offensive” without being detected and bombed to shreds in their gathering areas. but since public info is lacking on the subject, I’ll just keep my speculations to myself.

This is all to cover the Turkish advance on Al bab. So now the SAA will have to attack Al Bab from the south and make another thrust through Palmira toward Deri Azour before they go after Idib. With the troops freed from Allepo it won’t take a month tops plus they can recruit and train new solders from the people liberated from ISIS and Al CIA DA in Aleppo. They should be well motivated after how they were treated by the “moderate terrorists” torture beheadings etc. I bet the SAA get another 5k to 10 k plus of new motivated soldiers from that at least.

Please don’t believe this narrative. The situation in Plamyra is not worse as exposed by the map. Syrian and Iranian agencies are reporting different things

How can ISIS afford to spare any extra soldiers given how they’re currently facing large assaults against Al Bab and Mosul? They clearly have no shortage of foreign recruits.

This is a totally different territory. They are not an organized army.

ISUS has surprised SAA with fighters re-located from Mosul front. This is what the US hoped for. No need for panic, Palmyra will hold with reinforcements from Damascus area and non-stop SY/RU airstrikes. They are in open area and will even be targeted during night.

The US and SA are recruiting mercs from all over the Muslim world. They flew quite a few from Syria to Yemen a while back to help the Saudis. It’s not some mullah arranging all this, it’s the CIA/Mossad.

It is NOT foreign recruits, but the 10000 fraud “ISIS” mercenaries that fled Mosul over a month ago to be “redeployed” with the help of the criminal US into Syria… We can see now where these 10000 “iSIS” soldiers have been redeployed to, and that is Palmyra

the entered the city and have cut the highway

I’ve just read that but doubt the information… let’s wait for confirmation.

Iran has played games long enough. Syria is out of troops, having 50% of their solders dead already, and the other 50% exhausted. Time for 12,000 Iranian Basij forces to storm the battle fields and bring victory. Or forever live with a Zionist-win.

The manpower issue is cropping up again. Palmyra was very thinly defended after April due to the SAA elite forces moving onto the Aleppo front together with Hezbollah. Their best bet would be to get more Hezbollah fighters to finish off Aleppo and redeploy the Desert Tigers to Palmyra. Possibly with so much open spaces around Palmyra , Russian forward air controllers should get more involved in using all available helicopter gunships to target and destroy Isis columns. The open spaces would also allow for the wider use of rocket artillery especially the Smerch , Urugan and TOS1A systems to target and destroy Isis staging and supply areas.

Palmyra is already falling into the hands of ISIS. All the major world news centers are celebrating it with champagne in hand, contrary to the 93 percent of Aleppo fallen into the hands of the Syrian government and its allies. If it had not been for so many Russian unilateral pauses, the 100 per cent of aleppo would have fallen long ago leaving free invaluable resources to counteract and prevent the fall of Palmyra, embarrassment and shame for russia and evidence of their full ineptness by still continuing to believe and collaborate and loosing time in talks with the Americans, principal creator and sponsor of ISIS.

Not so fast. The NDF can’t hold ground against ISUS offensive, but SAA probably left at least 2 mech. “brigades” to hold city and T4 airbase (this I hope).T4 perimeter must be held to continue air ops. I read that ISUS launched surprise attack in bad weather (Just like the battle of the bulge!) with reinforcements from Mosul front. They are desperate for a victory (On to Antwerp!). The weather clears and then you see the result.

In militarymaps.info it is reported that US drones are watching the Palmyra battlefield. Is there a better prove of US help to IS?