The Syrian Arab Army (SAA) continued clashing with Hay’at Tahrir al-Sham (HTS) and Ahrar al-Sham in the strategic Qaboun district in northeastern Damascus. The SAA targeted militant positions with more than 10 heavy rockets and carried out an attempt to advance in the northern part of the district.

In turn, HTS announced that militants had repelled the SAA attack. Ahrar Al-Sham fighters were able to destroy the famous T-72 Shafrah tank after it was hit by what appeared to be a heavy IED. 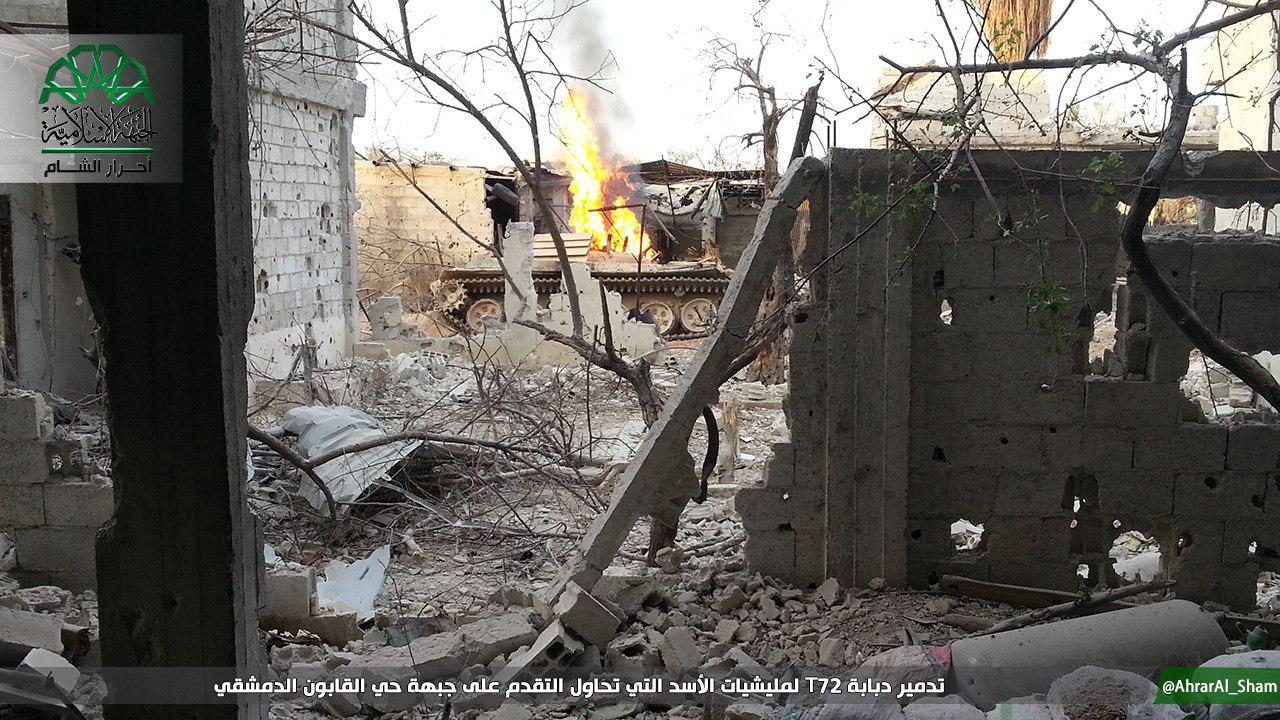 Ahrar al-Sham also claimed that another T-72 tank was damaged without releasing any evidence.

Meanwhile, the Syrian Air Force destroyed many HTS and Jaish al-Islam positions in the Jobar district in eastern Damascus. It also targeted positions of Ahrar al-Sham in the Qaboun area.

According to pro-government media. HTS was planning to fake a chemical attack by targeting civilians near the front lines in Ein Tirma and Arbin with rockets carrying chemical weapons. The attack was planned to delay SAA operations in the vicinity of Damascus and to provoke the United States to deliver more missile strikes on Syrian military targets.

I suspect that all the Terrorist gas shelling is coordinated with the US via the Turkish advisers embedded with the criminals.

It is entirely possible my friend. Why do you think the Turks are the first to use fake autopsies to confirm their fake self-inflicted chemical attacks from their terrorist puppets in Syria?

Sad to say, but HTS may have gassed some captured civilians from N Hama area to provide actual fake evidence of attack. I would not put it past these scumbags. Appears that the false flag operation was well prepared.

of course was well prepared. They got people behind them who did their homework, Turks, Brits, Frenchs or Yanks, you name them.

Half ass prepared by the extremists who probably failed to follow instructions if they received outside help to stage such an incident.

No these gas attacks in Qaboun And Jobar are coordinated with Israel and Saudi advisers. Turkey has the most influence on those head choppers near their border, look at a map.

So what’s the big deal about the “Shafrah” tank? It looks like it’s been overhauled recently and had the turrent replaced with a short dome that has several grenade launching tubes arrayed around the perimeter.

Feras Karam, a reporter for Orient News, announced a media campaign covering Syrian airstrikes and ‘chlorine poison’ in Idlib (Khan Shaykhun) the day before that happened. He sent another tweet out on the 15th announcing the same kind of media campaign that would cover the chemical weapons used in Jobar. Since ‘media activists’ and White Helmets (head-choppers) need to know about these in advance, we can probably expect one here soon. They are getting their asses kicked by the SAA there, so the Sarin has to come out soon. Expect retaliatory Tomahawk showers later this week. https://twitter.com/maytham956/status/853367875146526720