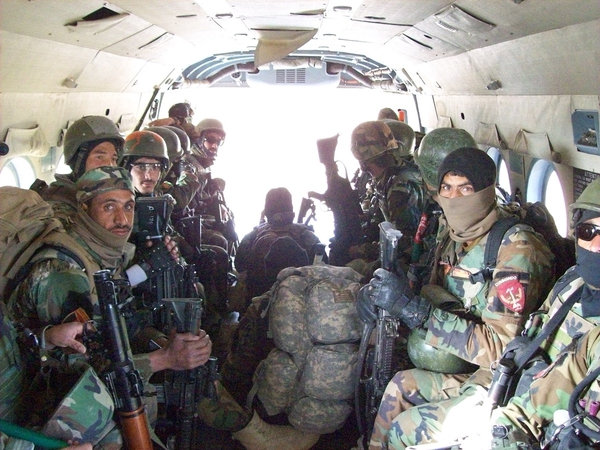 On February 1, the Special Force Unit of the Afghan National Directorate of Security (NDS) conducted a series of operations from air and ground against the Taliban in the villages of Osmankhail, Mohammadkhail, Chawlawk and Akhtarkhail in the Maiwand district of the southern Kandahar province, according to the Afghan Tolo TV.

The head of military operations in Maiwand district, Sultan Mohammad revealed to Radio Free Europe/Radio Liberty (RFE\RL) that the operations targeted Taliban fighters who were preparing to launch coordinated attacks on checkpoints of the Afghan Army in Panjwai and Maiwand districts.

RFE\RL reported that over 83 fighters of the Taliban had been killed by the NDS Special Force Unit. 32 suspects were also arrested and an explosives workshop plus 10 hideouts of the Taliban were destroyed during the operations, according to Tolo.

Hours before the NDS operations, 14 Afghan soldiers were killed when Taliban fighters attacked their gathering in Maiwand district, according to the Taliban news agency Voice of Jihad. The Taliban pre-emptive attack proves that the group knew in advance about some of the NDS operations in the Maiwand district and manged to foil some of them. Most likely, this was caused by an operation security breach within the Afghan military.

Simple. Afghan Army and it’s NATO friends should conduct themselves away from the whole population prying eyes. And please turn off the damn phone or just leave it at home.

Yeah, but…., but…., how are they going to post selfies of themselves online? Or have a jog with some music?

Funny how they keep eliminating Taliban, but there are still more today than they had years ago, seems like failure is winning to them.

Gℴogle pays every one 97 dollars per/hr to complete few services online .. Work Some few hours daily and live happy greater time with your family … any individual can also join this simple job…on Thursday I got a latest Land Rover Defender after just earning $9908 this four weeks .no doubt it is the easiest job however you can now not forgive yourself if you do not take a look at this.!ex673z:∰∰∰ http://GoogleHomeCashJobsMindOpportunity/earn/hourly… ♥♥♥t♥♥h♥♥♥o♥f♥♥♥q♥♥m♥♥n♥♥e♥♥z♥c♥o♥♥♥u♥♥t♥♥♥y♥♥d♥♥♥w♥s♥♥t♥c♥♥a♥♥♥n♥♥♥i♥♥♥u♥♥♥s♥♥♥k:::::!ke393i:lnsmk

These are Afghan soldiers, not US soldiers.

They are still trained mercenaries for the CIA used in protecting drug operations, seems like the reports are true, they returned to their old ways in Afghanistan selling drugs to fund their operations :) !

These are American universal soldiers..! Sometimes called mercenaries on the other corner of the world.

Here’s a TRUE story Southfront won’t be covering that shows the REALITY of these operations. A few years back America death squads operating in Afghanistan (to the same purpose) regularly conducted night raids into villages, riddled innocent men and women with bullets, and then when their on-the-spot ‘forensic’ experts determined the victims had nothing to do with ‘terrorism’, extracted the bullets from the corpses to give the American mass murderers ‘plausible deniability’. Google it. Every word is true.

So why is Southfront cheering these death squads today?

While the zionists who have infiltrated the editorial board of Southfront convert this site to just another pro-zionist outlet, Ahed Tamimi cintinues to get ZERO coverage here. I see a few people in the comments attempt to redress this obscene omission- much to the horror of zionist trolls who make a laughable attempt to ‘own’ the comment section.

Lol they don’t even do that anymore. They’d just plant a weapon on them.

I prefers the murdering of the crippled innocent man and pray for him compared to the fake Ahed Tammi and parents sellouts.. she’s too ugly to be a Palestinian..!

it is nice to label any afghani civilian killed or captured as taliban insurgent… so typical of the body count mess similar to vietnam war where civilians that got killed instantly become vietcong..

even the USMC in afghanistan wryly call this the “afghan math” , over inflation of enemy estimate