Inspired by US threats against the Syrian government, militant groups oeprating in eastern Qalamoun launched over 120 Grad rockets on the al-Seen and Dumayr airbases of the Syrian Arab Air Force.

While militants in eastern Qalamoun are often refered as the so-called Free Syrian Army, indeed, the most influential group in the area is Jaish al-Islam.

The Qalamoun area has been for a long-time a ceasefire zone between the Syrian Army and local militants. However, the developing crisis over Syria changed the situation.

It’s interseting to note that the area of Douma, where a chemical attack allegedly took place on April 7, was then also controlled by Jaish al-Islam.

According to the Russian military, Syrian forces established full control of Douma and the entire Eastern Ghouta region where it’s cocated on April 12. However, the 5 days were enough to trigger a large-scale escalation with what the Russian military calls a “staged chemical attack.”

“The notorious White Helmets, who operate as part of terrorist groups, staged and filmed a chemical weapons attack on civilians in the town of Duma,” First Deputy Chief of the Russian General Staff’s Main Operations Department Lieutenant General Viktor Poznikhir commented on the situation on April 11.

Nonetheless, the US and its allies continue to accuse the Assad government, Russia and Iran of civilian casualties and are openly drawin up palns for a new military agression against Syria.

We can inform the arrogant with truth, however, their ignorance refutes it

” Is it the Jew Bankers or the Zionist Generals.”

The WHITE HELMETS are CIA controlled for the US Deep State and are effectively retrained ISIS members financed by dark clandestine money and supported in the Western MSM as an unbiased NGO which they most definitely are not. They are a 5th column of dangerous agents.

It is said that some British SAS reverted to the tradition of dressing up as fully covered Muslim Women in order to escape Douma.

IF that is correct , I would suspect they were accompanied by their White Helmet Husbands and other real wives.

As I understand it, Nigel, the White Helmets isn’t a full-time job for them. It’s not retraining ISIS and al Nusra, but additional training for a few of them.

The civilians never report seeing any – ever. They don’t respond to accidents or fires and their ‘clinics’ are only open to other head-choppers, not civilians. It’s basically free combat medical training for existing al Nusra/ISIS members. They’re usually not to busy chopping heads during an air raid, so they put on the helmets and wake up the local ‘media activist’ to shoot some video. After the propaganda is in the can, they hang up their helmets and vests, take a handful of Captagon and load and lock the AK. Then it’s back to the usual head-chopper grind. The only 9-to-5 White Helmets that exist work in London as media contacts.

Did they damage the airbase?

I was also wondering hat damage if any was done – the film seemed to run out at the important part.

I guess there would have been a line about casualties if there were any. It must have been more of “sound and fury”.

Vitex
Reply to  You can call me Al

I wonder if this wasn’t a further Israeli test of Pantsir’s capabilities. Shooting down Grads with a Pantsir would be a bit like skeet. As long as you don’t run out of cannon shells.

And their commanders have sent reinforcements to try to save their dreams of a sharia law califate. The zionists are desperate to also save their regime change agenda that the Russians have brought to a humiliating halt.That is what this fake chemical attacks are all about,and with the lying zionist news networks playing their part, the Sheelple in the west are oblivious to the zionists traitors in their governments baying for war,to please their israhellI gangster bosses.

russia and syrai force target all white helmets bcuz they are alqaida terriost . find them and kill this white helmets thugs. and make them confess. how come white helmets disapperaerd from goutha or they changed their clothes to civilian so they should not get caught

The witches of Washington, UK and France have injected their buddies in Palestine, Syria, Iraq, Libya, Afghanistan, Ukraine etc. All these witches want to control whole world by massacre them.

These Jayshtarded Orcs have been besieged in the Qalamoun Mountains for years. If they had such large stocks of missiles, wouldn’t they have already used them against the SAA and Daesh offensives they have faced? It’s obvious that Axis of Evil of France, UK, US (FUKUS) has found ways to resupply their puppet Orcs.

Those might of been seized from captured SAA bases early in the war then traded between the “rebel” groups for whatever since none knew how to operate their systems. This group obviously knows how and may be using them up now before losing them to air attacks since their pocket should be next in line for liberation.

Possibly. It would only require FUKUS (France, UK, US) to provide “advisers”.

Inspired by US threats –> to read : ”instructed by US commands”

Jaysh al-Islam in Eastern Qalamoun are likely to meet the Tiger Forces in the not too distant future.

In Irak it was WMD, in Libya Gadaffi killed his own people, in Syria again a faked chemical attack.

The US can use any excuse to start firing missiles, they don’t care…as the worlds biggest buffoon.

They, US/EU, only care about controll over oil/gas resources, future megacorporate profits and taking out independant, competing states in OIL/GAS markets, who bypass the Dollar.

So do Black cops!

One small question – where did they get the missiles from???
It’s a Russian weapon. If they ‘won’ (stole) the launchers from the SAA, they would most problaly have been depleted of munition. The Russian surely did not send them any missile -is it likely they was ‘gifted’ by the ‘muricans (that, in turn, made the Ukro’s ‘contribute’)??

During second lost of Palmyra russians ran as rabbuts. They left there lot of heavy equepment. This was criticizd also in russian media.

Otherwise, rad you cen buy on black market. It is produced in different countries. You must realize, the name Grad is used also for copies, not only original soviet weapon.

Usefull remarks. I know that Russia is not the only supplier, but still, who would consider or even agree the supply?? Other users of the system, Iran, former Soviet Republics, will contain them for defence – only Ukraine is corrupt enough to sell it to TERRORIST!! Other CIS-countries, even all of the ***-stans have higher standards than Ukraine!

You are right. Therefore i also wrote, grad is not only russian weapon. have a nice day!

Erdogan was magic carpet for ISUS/Takfiri for years.
Every Gangster weapons dealer in Europe was moving old stock to Syria via Turkey.
I’m not convinced the Mad Caliph has ceased these intrigues. 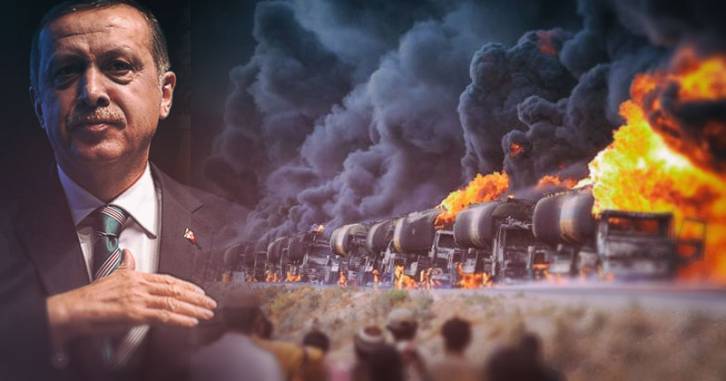 Syrian war has been a crime spree …which rivals the Bankers fund all sides for WW 2.

Remember that the Empire was busy collecting all of those Soviet made weapons from those newly made vassals of the Empire after the collapse of the Soviet Union for just such activities. Their fellow terrorists supporters will find all kinds of creative ways to funnel those weapons in be it from underground tunnels linking cities to those special unmarked helicopters seen regularly flying to and fro.

Via The Ukraine mostly. Now you know why that Country was overthrown.

Yeaah, sadly many of them sucked up the sweet talk from Uncle $am, only to learn later that he will NEVER delevier on his promises.
The Ukraine (the Borderland) holds the largest amount of Soviet weapons outside of Russia, and subsequent actions from Porky & Co., have shown that they do not yet realize that the yanks is NOT to be trusted!

Bulgaria has been manufacturing thousands of Soviet era munitions for the US Coalition of Terror.

But still do not openly support the U$ criminal behaviour – and EU rules forbid transfer of such weapons outside of the Union (though, since they are also part of NATO, there is some doubt about thtat). I still thinks that Ukraine is the most likely contributor – they could have used the missiles in Donbass, but since they are straped of money, and they are open to bribes …

I am sure Ukraine is involved in many nefarious ways in the Syrian disaster, however I enclose a report of the Bulgarian connection that might interest you Ivan.

They could’ve been captured when the various groups seized SAA bases. Those were chock-full of weapons and munitions that should’ve been destroyed before the SAA abandoned the bases.

A Russian or Syrian bomb should have fallen on these clowns, before they got half of their shots off.

These militants want a democracy, and this is their campaign to win votes?

The Democracy they wish for involves a male only caliphate with women dressed in black from head to toe and told to keep their mouths shut unless taking a length from these cowards. They do not believe in God or Allah or any superior holy being; they only believe in death, destruction, torture and cash. For as long as the Princeling of Evil in the Dessert continues to throw money at them to maintain his faux caliphate in Riyadh, Washington, London & Paris will continue along their merry path of selling arms and munitions to support his black caliphate vision.

It works in the US and Europe Lucian :)

“Militant Groups” is New-speak for American and Israeli Mercenaries, paid for by the House of Rothschild .
Not-with-standing, American and Israeli Military are COWARDS, except against UNARMED Women and Children AND without their massive weaponry, did anyone actually believe Trump or Nutty Yahoo would be foolish enough to send in American and/or Israeli troops, in order to get their AS-ES kicked ???

This is what those cowards are good at: COWARD Ashkenazi “Jews” doing some of
what they do best, abusing Women and Children, confined in Prison: https://www.aljazeera.com/news/2018/04/video-shows-ahed-tamimi-interrogation-israeli-detention-centre-180409094459300.html

These guys have barked too many time, after the ISIS camp south of Damascus, these savages should be boiled with hyperbaric missiles and then their remains should be fed to the pigs.

………….not a lot left after those missile types have landed……………………….everything is very very very crispy !