Allowed rare access to the Saudi military’s targeting cells, IRIN Middle East editor Annie Slemrod is presented with an anodyne operation that couldn’t be further from the horror on the ground in Yemen. “Our position is extremely strong,” said Lieutenant General Fayyad al-Ruwaili. “We are hitting military targets on [the enemy’s] side, their facilities, their lines of communication…. At the end of the day, they will be the losers.”

The certainty with which the deputy chief of staff of Saudi Arabia’s armed forces outlined his country’s position seemed off-key, especially given the storm brewing around the kingdom’s 17-month intervention in Yemen.

Granted rare access inside the Saudi defence ministry to specialist cells where targeting decisions are taken, IRIN found a jarring disconnect between the cool calculations of the generals in Riyadh and the deaths of innocent civilians, women, and children on the ground.

Throughout IRIN’s guided tour, Saudi military officials insisted they are scrupulous in their targeting, abide by the rules of war, and are constantly honing what they do to avoid civilian casualties.

Al-Ruwaili said UN numbers on civilian deaths were not to be trusted.

“We are not saying that there have been [no civilian casualties]. Any military operation in a situation working against a guerrilla [force] would have some collateral damage or effect.” But the casualties are minimal, al-Ruwaili said.

We choose our targets very carefully. We scrutinise the target list… and we have a no target list – it is thousands – and we do avoid all these targets. 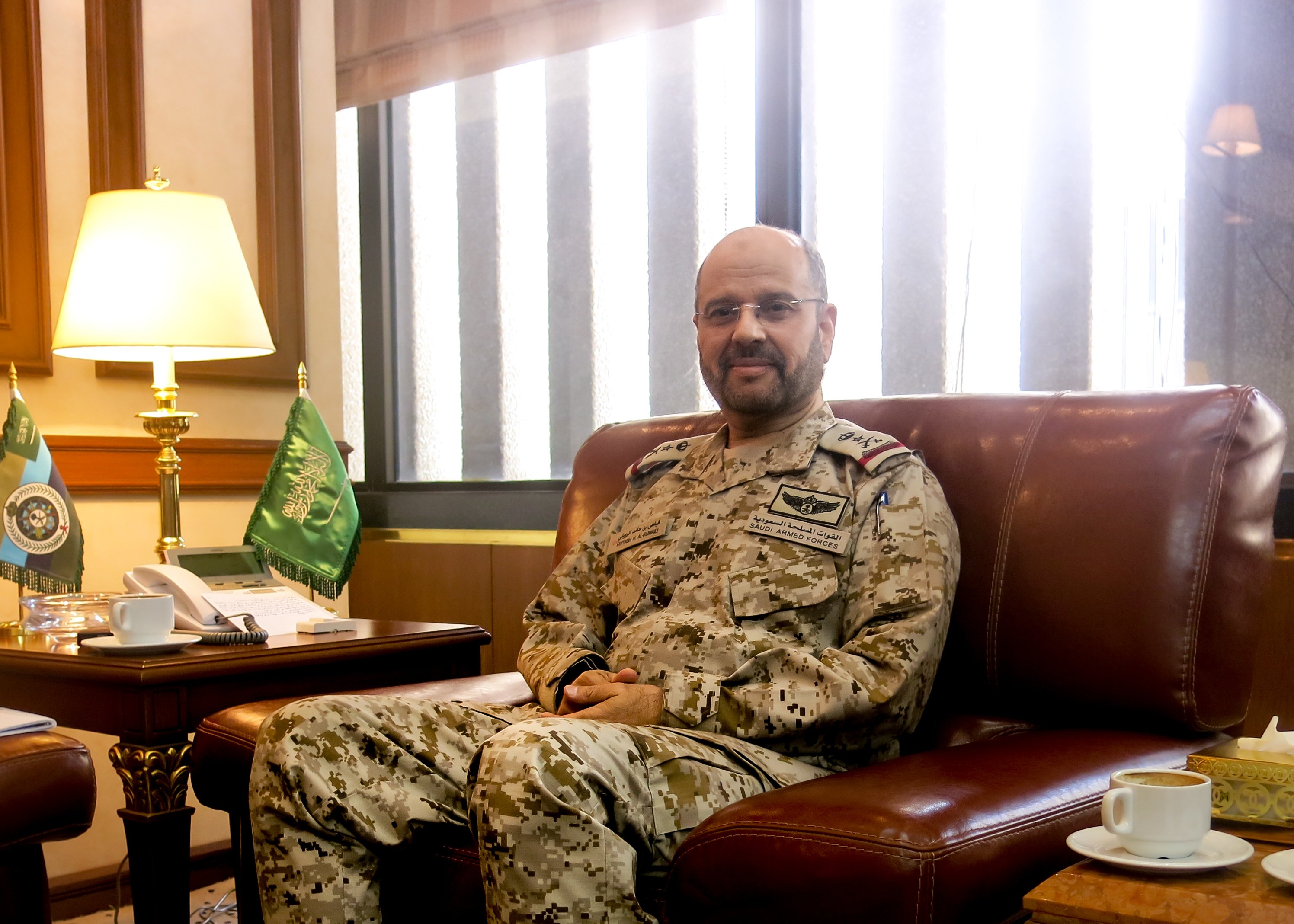 Much of this decision-making happens inside an operations room that has a plaque, in English and Arabic, that reads “Joint Targeting Cell”. Despite its name, the choices about what to target don’t appear to be made here, only what not to hit.

There are topographic maps on one wall and more uniformed men in front of computers. A map of Yemen is projected on one side of a large screen. Coloured icons mark schools, hospitals, and known UN and NGO locations. Zooming into Sana’a, some labels were visible: a hospital, a Red Crescent location, and a college. The coordinates of these locations are shared by the groups themselves.

IRIN was shown a document from OCHA, the UN’s emergency aid coordination body. It listed the precise details of a planned aid convoy: driving times, exact coordinates, and photographs of vehicles.

A soldier explained how it works. If a static target is within 500 metres of a “no strike” location or a populated area, warplanes either won’t hit it or they’ll choose a less powerful weapon. This “targeting” cell was said to be in 24-hour coordination with pilots doing the actual bombing.

Lieutenant Colonel Turki al-Maliki of the air force rushed over from his offices next door to answer further questions about the difficult reality of asymmetric warfare. He joked that he is “the most hated guy in the air force” because he is the man who has to call off certain strikes.

Al-Maliki said Saudi Arabia is doing its best to limit civilian damage and constantly “improving the process”. “Does [our] collateral damage methodology ensure the safe execution [of warfare] for civilian people? It does,” he said, assuredly.

And when they do err, the Saudis said, they take full responsibility.

“We are humans and we do make mistakes,” said al-Ruwaili. In these cases “we have an independent investigation team that [does] the whole thing, and if we make a mistake we… acknowledge it.”

This process is done by what’s called the Joint Incident Assessment Team. In early August, the JIAT, a group of appointed experts from the Gulf region, released a summary of eight investigations into claims of attacks that violated international law.

In one case – July 2015 airstrikes on residential compounds connected to a power plant that Human Rights Watchsaid killed at least 65 civilians including 10 children – the team concluded that faulty intelligence had led to the hit, and promised to pay compensation to victims’ families.

In another case – a hit on an MSF hospital in Saada – the investigation found that Houthi rebel forces had been using the building (MSF denies this) but said the military should have notified the medical charity before the strike.

In the rest of the cases, including a marketplace bombing where Human Rights Watch and the UN reported between 97 and 107 civilian deaths and the JIAT found none – the investigations left the coalition in the clear. Al-Ruwaili said the JIAT is now looking at seven further cases.

But internal investigation isn’t good enough, according to Human Rights Watch and other critics, who argue that the Saudis should release details about panel members and full reports on each incident. The UN has also called for independent investigations.

Al-Ruwaili insisted there was no such need.

The team is headed by a retired two-star air force general “who is not working for the government anymore,” he said. “He is independent.”

Back on the ground

On the same day that IRIN visited the war’s Riyadh headquarters, ushered in out of the desert heat after a few questions and phone calls by a military policeman in a red beret, the UN upped its estimate of the death toll in Yemen to 10,000. For months, official numbers had lingered around 6,000. Given the scale of fighting, this had begun to beggar belief.

Up until June of this year, Yemeni civilians accounted for 82 percent of the deaths and injuries from Saudi-led coalition airstrikes, according to Action on Armed Violence, a group that monitors weapons violence worldwide and investigates the arms trade.

This mounting civilian toll means that the trade, when it comes to who is dealing with Saudi Arabia, is increasingly under the microscope.

It’s not just the airstrikes that cause suffering. The war has driven Yemen from what was already a humanitarian crisis before the war to what is now more like a full-blown catastrophe. More than half of its 26 million people are considered food insecure, 2.8 million (more than 10 percent of all Yemenis) have been displaced from their homes, and the vital healthcare sector is almost non-existent. 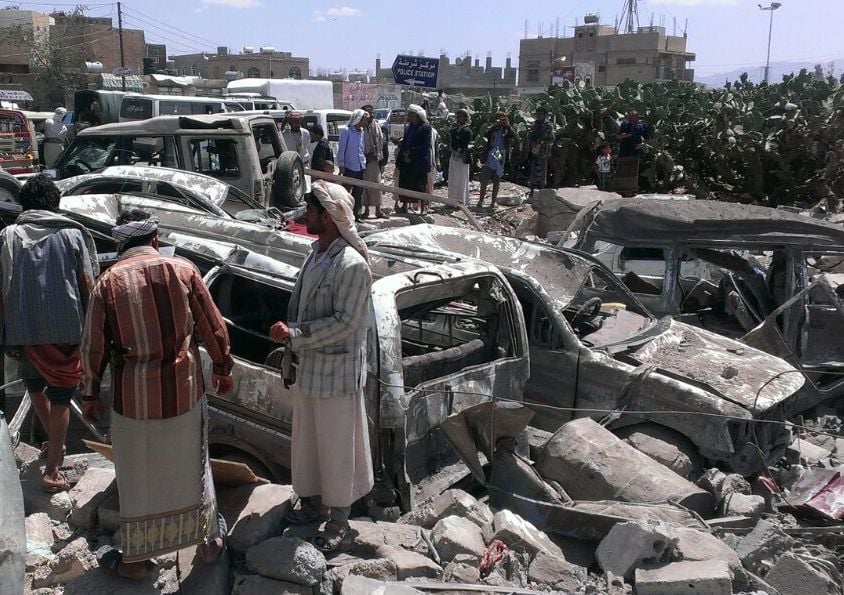 Watchdog groups have accused the Saudi-led coalition of killing civilians and targeting civilian infrastructure. An early August report by the UN High Commissioner for Human Rights detailed hits on weddings, homes, markets, and civilian infrastructure. It also listed abuses by the Houthis and other parties to the conflict, which is no longer a fight between just two sides.

There was particular indignation recently when the UN, under the threat of Saudi Arabia pulling its funding from vital humanitarian programmes, suspended the coalition from a list of violators of children’s rights.

Behind the sun-bleached high walls of the Ministry of Defence in Riyadh, where the General Staff Command is running the air campaign in Yemen, all appeared calm, on message, and, according to the officials, was running like clockwork.

But events on the ground told a very different story. Houthi shelling had just killed a three-year-old boy in the Saudi border city of Najran; there was “carnage” in the southern Yemeni city of Aden thanks to a suicide bombing claimed by so-called Islamic State; and the medical charity Médecins Sans Frontières had just announced it was pulling out of the north of Yemen after another of its facilities was hit.

Al-Ruwaili, previously chief of the Royal Saudi Air Force, was conspicuously unruffled. Bespectacled, with a closely shorn beard, and accompanied by several uniformed colleagues, he spelt out the status of his kingdom’s first-ever major foreign war in matter-of-fact terms.

Despite the growing criticism of UK arms sales (which had not quite risen to its current furore), he expressed confidence that Saudi Arabia’s allies remained on side. “We appreciate the support and help of the international community, and top of the list are our friends the Americans and the Brits.

They understand the reasons behind the operation… they appreciate the situation [and what] we are doing.

At the war’s outset, this certainly appeared the case.

Backed by a 10-state coalition, including all the Gulf countries, Saudi Arabia unleashed its first airstrikes on Yemen in late March 2015 after the internationally recognised president, Abd Rabbu Mansour Hadi, had been placed under house arrest by Houthi rebels in the capital Sana’a (he eventually fled and found refuge in Saudi Arabia).

When Saudi Arabia and its allies said they were intervening at the request of the “legitimate government of Yemen”, a term they still use, the United States and Britain, and most of the international community (save Iran), expressed support. The Sunni kingdom also portrays the Shia Houthis as a dangerous Iranian proxy and a threat to their shared border – al-Ruwaili mentioned the threat of “another Hezbollah”.

On the first day of airstrikes, a spokesperson for the US National Security Council said the action was “to defend Saudi Arabia’s border and protect Yemen’s legitimate government”. The United States promised to provide logistical and intelligence support to the operations. Britain followed suit. The French offered their assistance too.

Although there’s been no change of policy from Washington or London, domestic pressure has been building steadily on both administrations and there are signs that political and military alliances are beginning to fray as the civilian toll mounts.

But while unease with the war is palpable in foreign capitals, it was nowhere to be seen at Saudi HQ, where the line was strictly that this war is for, not against, the Yemeni people.

Pointing to the three or four million Yemenis who live in Saudi Arabia and send home remittances, al-Ruwaili said: “We are there to help the Yemeni people.”

I think the majority of the Yemeni people look at our operation as one that is designed to help them, to stabilise Yemen, to have a prosperous Yemen that is ruled by the Yemenis – ruled by somebody they choose.

But while some Yemenis may be on side with the Saudi action, others clearly need a little persuading.

To that end, IRIN was shown leaflets in the operations room. The officials explained that they are dropped to bring locals onside, as are fliers warning civilians to stay away from specific military targets. 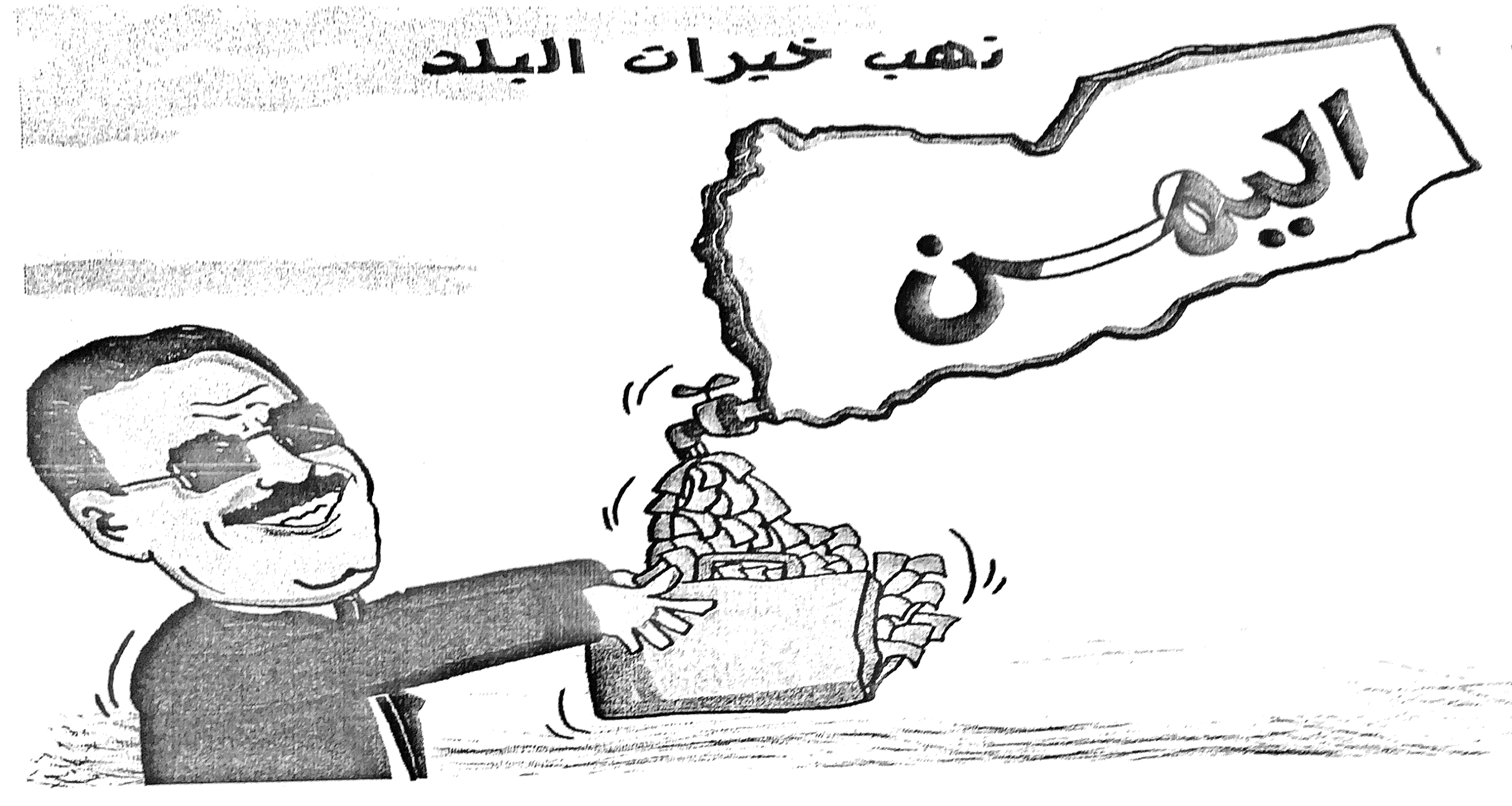 The propaganda or PSYOPS (Psychological Operations) material IRIN was shown is in simple to understand comic-strip form. In one two-panel strip, the first box shows a grinning man, traditional Yemeni dagger in his belt. In the background is a smiling girl with a backpack and another equally jubilant boy with a balloon.

The text reads: “Before the Houthi militias’ coup.”

In the second frame, the same man has stubble and a grim, toothy expression. His clothes are ragged, the dagger is gone, and the buildings that the children strode in front of are in flames.

“After the Houthi militias’ coup,” it says. 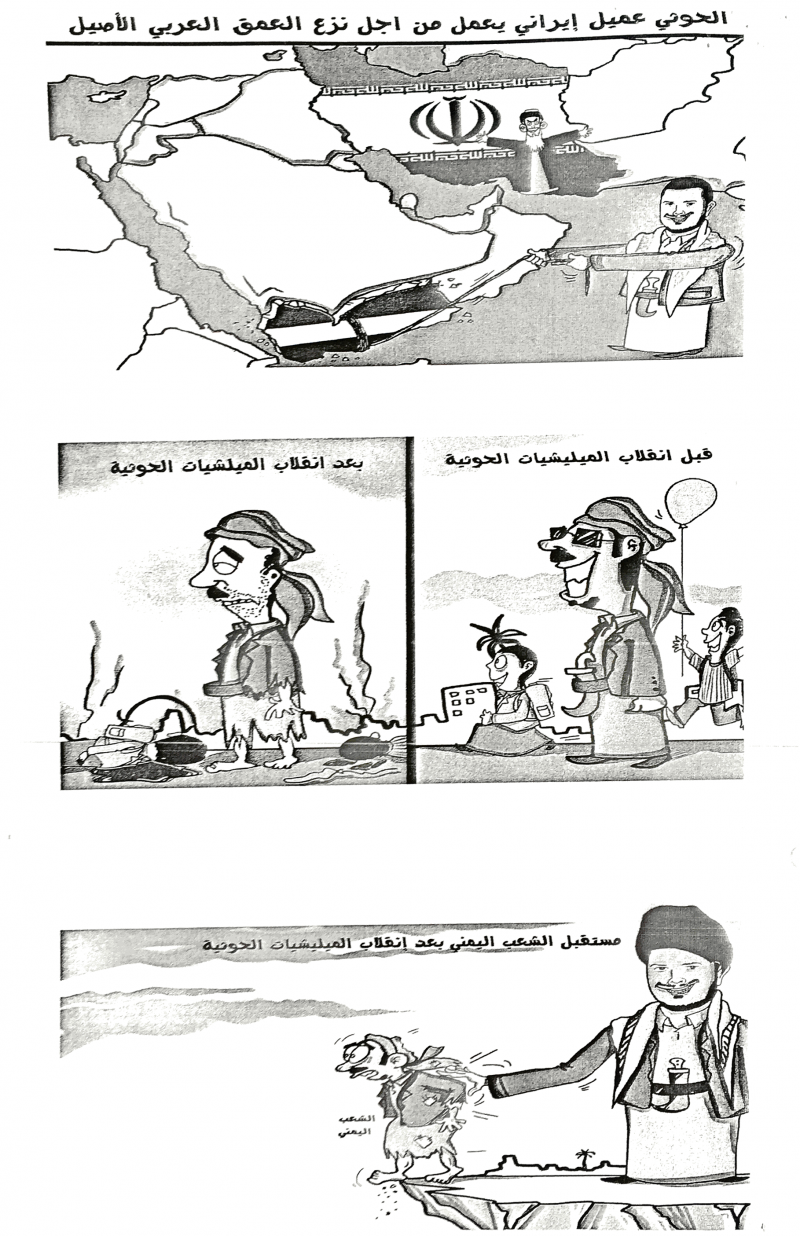 Examples of fliers the Saudi coalition drops in Yemen

It’s not a particularly subtle message. It isn’t intended to be.

In the “Joint Targeting Cell” one of the leaflets was particularly striking. From the bottom of the page, an arm clad in the red, black, and white of the Yemeni flag reached upwards. And from the top came a forearm in Saudi Arabian green. The two hands were clasped together.

This symbol represents how Saudi Arabia wants operation Decisive Storm in Yemen to be perceived. But it feels very far away from the reality of war on the streets of Sanaa, Taiz, and Aden.