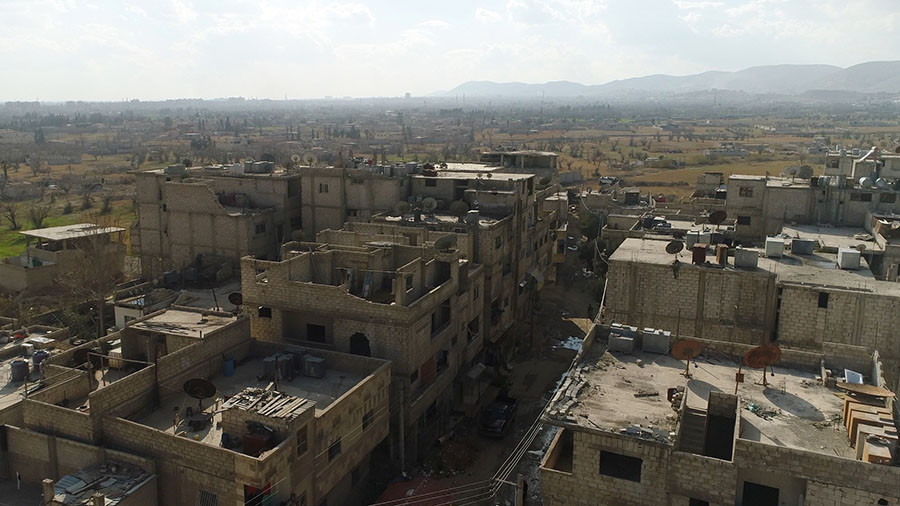 Infighting has erupted among militant groups in the Eastern Ghouta region, near the Syrian capital of Damascus, the Russian Defense Ministry said in a statement on March 12.

“Open fighting between the members of illegal armed units is underway in the streets, civilians are forced to seek shelter not to accidentally become victims of hostilities,” Major General Vladimir Zolotukhin said.

He added that fighting erupted after the Russian military had demanded Faylaq al-Rahman to separate from Hayat Tahrir al-Sham (Jabhat al-Nusra).

Earlier Moscow proposed a safe passage out of Eastern Ghouta to militants willing to surrender their areas to the Syrian government.

The militants’s infighting comes as Syrian government forces are rapidly advancing in the central and southern parts of Eastern Ghouta where they have achieved notable gains over the last few days.

Rats eating each other!

I vote SAA to help all sides, to kill each other and to aid them, in every possible way they can.

It must be head-chopper mating season – they all go crazy and start fighting each other. Very dangerous in this state. Toss in some Captagon, and I can only imagine the terror of the last few sheep in Ghouta. https://youtu.be/SIaFtAKnqBU

Gℴogle offereing you $99 per/hr to complete small jobs from the comfort of home . Do job only for few period of time daily and have more time together with your circle of relatives . Any one can join this official job!on Monday I purchased a top of the range McLaren F3 after I been making $19744 this last six weeks .it seems my favourite-work but you would not forgive yourself if you don’t learn this.!ax19l:↛↛↛ http://GoogleFashionFinanceReportsOnline/get/pay/97$/everyhour… ♥i♥♥♥f♥♥♥x♥♥♥g♥l♥u♥y♥♥z♥♥w♥♥♥e♥♥y♥m♥♥♥x♥l♥i♥♥v♥♥e♥♥q♥♥♥a♥♥d♥r♥♥♥r♥♥t♥i♥♥♥q:::::::!px483e:sq

The US will not stop until Damascus and Assad are destroyed!

A Clean Break: A New Strategy for Securing the Realm

Syria does not cooperate with the west economically, duh! Look out Iran, (they don’t either).

I know this, that was my point!!! The US WILL NOT ALLOW THIS!!! Pride will destroy all.

It’s not so much that Syria doesn’t cooperate with west economically – rather that the US and west have imposed heavy sanctions against the Syrian economy.

AM Hants
Reply to  Freelance Christian

What was it that Kissinger said about the Forces that served Washington DC? If the US wants to treat their forces as no more than Cannon Fodder, it would interesting if the Forces, turned on their masters? No wonder Soros is demanding gun control?

Freelance Christian
Reply to  AM Hants

I check profiles of those who reply to me, you honor me sir. Keep up the good fight! I noticed the other 2 have hidden profiles.?

AM Hants
Reply to  Freelance Christian

The other two hidden profiles, are not hidden, just no longer used. ‘Housewife from Hampshire’, I forgot her login details, but, that is me. AMHants, was banned from a few sites, I have no idea why haha. So it was easier to just go with AM Hants, rather than login and out, of where and where I could not go. Thank you for your kind words and we all work together. Each of us with different views, but, at the end of the day, just wanting a world that is tolerant and peaceful and somewhere nice for our children, families and young to grow up in. That is not led by those that are so easy to coerce or have lifestyle choices, that make them easy to blackmail. We seriously need to clean up and take out those politicians, that have no loyalty to their nation or those that elected them.

Kissinger’s statement is so notorious for two reasons; first is the obvious disrespect for those who serve their country and expose themselves to danger, as opposed technocrats like Kissinger, and secondly due to the notable ethnic slur dimension of the remark, as ‘stupid animals’ is very close to an interpretation of the Jewish term ‘goyim’ – meaning non Jews – but also often intepreped as ‘cattle’.

Awful man, just like his close friend/relative Albright. I seriously found the quote absolutely disgusting as you would never get the likes of him or his friends on the frontline. Or willing to sacrifice their greed for the loyalty of their nation, but, expect others to do their dirty work for them.

gustavo
Reply to  AM Hants

Henry Kissinger is a criminal who support and instigate Viet-Nam war, Kosovo war, Irak war, Lybia war. He is a jew belonging to jew lobby.

AM Hants
Reply to  gustavo

He belongs to a tribe that have high-jacked the Jewish faith. Not all are the same satanists as Kissinger and friends.

gustavo
Reply to  AM Hants

He is talking about gentiles (DOGS IN HEBREW), Talmud racist teaching.

The US will collapse before that happens.

This kind of “low hanging fruit” propaganda is a waste of all our time, and franky an insult. Thatcher infamously used it against the striking miners back decades back when she was breaking the back of the working class unions.

We already know East Ghouta is done. A handful (relatively speaking) of rebels up against an organised modern, well-trained, well-supplied second-world army. So why the microscopic coverage at a time we all need to be thinking about other things. A distraction. A smokescreen. “GOOD NEWS” at a time when all the real news for our side is bad and getting worse.

-Iran is coming under pre-emptive ‘micro’ attacks with its co-ordinated actions against its embassies. Always a sign a war is approaching, for this is the old old tactic of the intelligence agencies of the West.

-Propaganda promising massive America strikes in Syria is growing daily in the press.

-Putin is on his knees promising the regimes of Egypt, Saudi Arabia, Turkey and Israel whatever they want.

-Britain is leading the FINAL demonisation of Putin and Russia with the nerve agent false-flag.

So of course our (Kremlin controlled) outlets are telling you to focus on east Ghouta, and to cheer the turkish slaughter of kurds. Read the “tea leaves” guys…

Putin has left Iran defenseless, and made it clear Russia’s only ‘protection’ of Iran is hoping the West don’t attack. Russian governmental trolls in our forums have made it clear Putin’s strategy in Syria now is to keep only an essential PORTION of Syria under Assad’s control- setting the stage for British, American and French bombing strikes against governmental forces and facilities across much of Syria very soon indeed.

And in the geo-political sense, Russia’s biggest problem is that China DESPISES WEAKNESS, and now sees Putin as the weakest possible leader in the face of the West’s aggression. China wanted three powers to rule the planet- China, Russia and the West- for that way China is not forced into an every more dangerous situation with the only other power. But Russia has let China down. China understands that the Deep State is steamrolling over Russia, and will literal ruin all of Russia’s interests outside the direct areas of the Russian Federation.

In the light of these facts, China knows a Great War is coming, and all of China’s thoughs must turn to that war. Another Super Power, thanks to Putin, preparing for the Final Conflict- not in a M.A.D. sense, but with the understanding that this war will be fought.

And the seed of all this loss and horror is Team Saker and the like stating Putin must NEVER punch the bully on the nose.

You think this is MSM propaganda news. LOL

you talking about low hanging fruit propaganda is among the most ridiculous things ever said in the whole history of the internet.

Here is something you should check up on the former MI6 agent who was poisoned in the vicinity of the Portondown-UK military Chemical research facility. Just check out the firefighters nearby no protective suits so this drop with a radius 0f 10-12 feet was made at the UK facility about 6 miles or approximately 10-13 km away. Now you figure that one out.

A shooting war between the US and Russia WILL go nuclear. Perhaps it’s just as well One Side is prepared to bite the bullet and wait for the western global financial system to fall?

There is no honour among Thieves.

They fear going north to meet their nemesisTurkey; They do not not want to give up to the SAA soldiers; They cannot leave because, they are surrounded so, they are stuck!Kaboom/kaboom/kaboom; Maybe, they are prepared to die for the Israhellis/USA Deep Statists components?