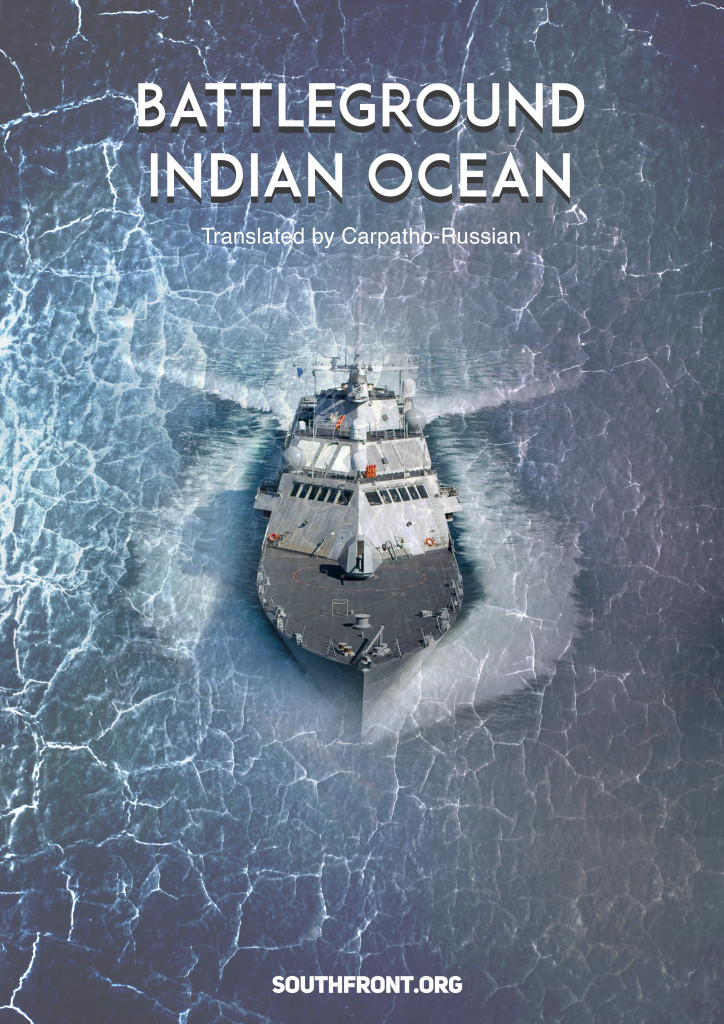 Originally appeared at Vpk-news, translated by Carpatho-Russian exclusively for SouthFront

The Indian Ocean has become a base of sorts for augmenting abroad the naval forces and air forces of the USA and Great Britain. Since the beginning of this century, the cumulative power of armaments disposed on the numerous military bases of these countries in this basin has more than doubled. American-British deliveries of military production to the regional states were increased just as much.

The well-known events in Iraq and Yemen, Sudan and Somalia, the strengthening of ISIS and similar organizations, the long-term crisis in the West’s relations with Tehran, the conflict nature of the Pakistan-India neighborhood, the expansion of multilateral cooperation of China with the Middle East and Africa, Russian foreign policy and trade and economic activity in Egypt, Iran, Sudan and the Southern Sudan, Thailand, and the Republic of South Africa – these are only some of the factors that predetermine the growth of the military presence of Washington and London in the region.

Up to 80% of the worldwide shipments of oil and liquefied natural gas transit through the Indian Ocean (of which, 40% through the Strait of Hormuz and nearly 40% through the Malacca Strait). Laying transcontinental gas pipelines to ports in Bangladesh, India, Pakistan, Djibouti, Kenya, and Eritrea is planned (generally by western companies).

The main point in the plan for military presence of Washington and London in this basin is the British Chagos Archipelago, located in the central part of the Indian Ocean. These islands were separated in the 1960s from then still-colonial Mauritius. After gaining independence, the country has been trying for a decade to draw attention of the United Nations to the issue of the Chagos. But, understandably, this was unsuccessful …

On December 30, 1966 by agreement between Great Britain and the USA on Diego Garcia, the main island of the archipelago, the unified base of the air forces and naval forces of the USA and Great Britain, the largest in the region, was put into operation. Subsequently it has been constantly expanded. Somewhat later, the largest communications reconnaissance station in the region was created here. Almost all countries of Africa, the Asian states in the basin of the Indian Ocean, Australia, the greater part of the Antarctic, close to a third of China, and also Central Asia and Kazakhstan are “accessible” to it.

It is specifically from Diego Garcia that the basic military operations of Washington and London in Somalia and Sudan, Afghanistan and Iraq, in the Persian Gulf and the Red Sea have been carried out. According to American and French sources (2015), as part of the naval forces group of the USA in the Indian Ocean, based mainly on Diego Garcia, there are available up to 20 fighting ships, including two aircraft carriers with 80 planes on each one. Warehouse ships with heavy armament, ammunition, and objects of material support for marines are located there. All this is in addition to the large group of the British air force and naval forces on the Chagos.

The Canadian Toronto Star noted: “The little-known British possession was transferred for lease to the United States in the 1970s, and was the most important location for concentrating USA troops during operations in Afghanistan and Iraq. The atoll continues in fact to fulfill the role of an aircraft carrier, in which 1700 military personnel of the USA are constantly disposed”.

By the way, Iranian and Chinese mass media reported that already in the 2010s nearly 400 super-powerful bombs were delivered to military base Diego Garcia. Notably, these are 195 high-precision “smart” Blu-110s, and 192 heavy Blu-117s.

As before, the USA still strives to dominate in the region, despite its allied relationships with Great Britain and France. Already in the mid-1970s, soon after London announced its policy of “military withdrawal from the region East of Suez”, most of Great Britain’s bases in the region were transferred to the USA. What is more, where Americans were based in the last years of existence of the USSR, and also in the late 1990s – early 2000s, serious modernization was carried out. And the occupation by Iraq of Kuwait (in the 1990s) became the pretext for the return of British military bases almost all the way to all Arabic countries of the Persian Gulf region.

As pertains to France, we recall that France was able to preserve for itself almost all island territories in this basin. Paris’ military and reconnaissance bases are located on most of them. But one may say that since the mid-1990s the USA has successfully driven a wedge into its key support points in the region. So, one of the largest bases of the naval forces and air forces of France in the region – near Djibouti port (the capital of the former French Somalia) – became in fact a joint base with the USA. Since the mid-1990s, American warships and planes have periodically used the French islands in the southern and southwest sectors of the Indian Ocean (Tromelin, Europa, Kerguelen, Ile Saint-Paul, Crozet). But Paris is avoiding closer military partnership with Washington and London in this region.

The fact is that France is specifically the first – already in the late 1970s – to support creating an APEC type structure in the Indian Ocean basin. The first step was the Intergovernmental Integration Commission on the Indian Ocean (KIO), created in 1984. Today this structure includes all French islands in the region, as well as Madagascar, Mauritius, the Seychelles, and the Commonwealth of the Comoros Islands. The entrance of Djibouti into the KIO is expected. A free trade regime operates between these countries and territories, and France supports their currencies directly or indirectly. Cooperation is also developing in other directions.

According to political scientist Charles Vuare, “the participation of Mauritius in the commission shows that Paris certainly sympathizes with the demands of Port Louis (the capital of Mauritius. – A. Ch.) regarding the return to Mauritius of the Chagos islands. In any case, France, Washington, and London are not involved in military training near this archipelago or with any military operations with the Chagos”.

Meanwhile, the mass media of the countries of the region ever more often provide information on China’s plans to create military bases in the Seychelles, Bangladesh, Pakistan, Tanzania, South Sudan, and Madagascar. There are no official denials from Beijing. Note in this regard that ex-unified Sudan is becoming the largest seller of oil to the People’s Republic of China, and Chinese import of hydrocarbons from the other designated countries is growing

In a word, the Indian Ocean is becoming practically the chief arena for the majority of global players. However, some see here a base for investments, and others rather a base for interventions.

Tags:china, India, russia, the UK, the us