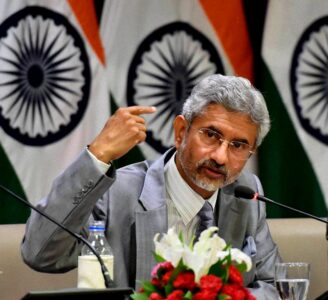 Jaishankar slams biases in US media against India

The comments by Price were preceded by Ely Ratner, US Assistant Secretary of Defence for Indo-Pacific Security Affairs, who claimed on September 22 that “The decision inside the US government was made on US interests on our defence partnership with Pakistan which is primarily focussed on counter-terrorism and nuclear security.”

The comments by Price came only hours after visiting Indian Foreign Minister S. Jaishankar rejected the logic that the F-16 sustainment package approved by Washington for Pakistan was to fight terrorism. Jaishankar said that everybody knows where and against whom F-16 fighter jets are used, an indirect reference that Pakistan uses them against India.

“You are not fooling anybody by saying these things,” Jaishankar said in response to a question during an interaction with Indian-Americans.

Earlier this month, Washington approved a $450 million F-16 fighter jet fleet maintenance programme to Pakistan, reversing the decision of the previous Trump administration to suspend military aid to Islamabad for providing safe havens for the Afghan Taliban and the Haqqani network. It is actually rather disdainful for Washington to expect New Delhi to accept the reasoning as being for counter-terrorism operations since Pakistan is arguably the terrorist capital of the world.

It is recalled that Pakistan has appeared on the FATF grey list, a global watchdog for terror financing and money laundering, since 2008. Most recently, a September 13 report by the Asia-Pacific Group of the FATF rated Pakistan’s level of effectiveness as “low” on 10 out of 11 international goals on anti-money laundering and combating the financing of terror.

In addition, it is also common knowledge that Pakistan played a double-game with the US during its occupation of Afghanistan. On the one side, it was supporting US operations with logistics and bases, but on the other it continued supporting radical extremists.

Pakistan’s cultivation and support for jihadist organisations has been a constant source of terrorism for India, with the most famous example perhaps being the 2008 Mumbai attacks where 175 people died after Pakistani terrorists reached India’s largest city by boat and committed their attacks. This is just one example of terrorism against India emanating from Pakistan and an insight on why the country remains on the FATF grey list.

India has legitimate security concerns for its citizens’ safety and sovereignty of its territory. With Pakistan and India locked in decades of wars and rivalry, especially over ownership claims on Jammu and Kashmir, the former has never been afraid to weaponize jihadists to achieve its goals. To deal with this hybrid warfare, India has had to take measures that has caused ire in the Western World.

Jaishankar slammed mainstream American media, particularly the Washington Post, for its “biased” coverage of India when speaking to Indian-Americans on September 25 in Washington.

“I look at the media. There are some newspapers, you know exactly what they are going to write, including one in this town,” he said. “My point is there are biases… the more India goes its way and the people who believe that they were the custodians and the shapers of India lose ground in India the more actually, some of these debaters are going to come outside.”

His comments came only two days after the New York Times claimed that the Indian government has been “stifling dissent, sidelining civilian institutions and making minorities second-class citizens”. It also comes months after a report by the US State Department on “human rights practices” claimed that India has “significant human rights issues.”

However, as Jaishankar pointed out when speaking about the situation in Kashmir, the West are more concerned about internet access than peoples safety: “If there are Indian soldiers or Indian policemen who are abducted; If there are people working for the government, or citizens going about their business, who will lose their lives?…There is a big song and dance about the internet being cut. Now, if you’ve reached the stage where you say an internet cut is more dangerous than the loss of human lives, then what can I say?”

Washington believed that because India joined QUAD to oppose China, alongside the US, Australia and Japan, the country is fully absorbed into its sphere of influence. Rather, Washington is learning that India serves its own interests, and in a way that they think best serves their country.

Even in joining QUAD, India has not turned against Russia despite significant pressure from the West, demonstrating that the country will not capitulate or submit to Washington’s interests if they are contrary to New Delhi’s. This is causing frustration in the US as it naively believes it can balance both Pakistan and India, and in this way, they think that condemning India in the Western-media sphere will make it more submissive, something it has discovered will have no impact on New Delhi’s policymaking.

London is the center of terrorism! Do you have a fear to state that truth?

The F-16 is a good 4th generation jet its much better than the F-35 in close combat /manoeuvrability and maintenance and more to the point reliability .

Latest US aviation defence news is that there was a big recall of the F-35 due to the explosive cartridges attached to the ejection seat not having any explosive and therefore it didn’t eject the pilot — tall pilots were at risk of decapitation earlier and no it still cant be used against Russian jets close up as Russia,s jets highly outmanoeuvre it/overheats/high maintenance/short flight mileage before needing serviced .– and the “secret ” paint job to stop it being observed flakes off .

One of the best single engine jets, maybe currently the best, though India’s new Tejas is very good (it’s a smaller bird compared to the Falcon). Eventually Su-75 should be numero uno

Pakistan needs to come to its senses and stop being influenced and baited by foreign parties that are playing it. People in general need to pay a tiny bit of attention to history and stop getting played and scammed by psychopathic divide-and-conquer schemes; then come to your own senses—emphasis on ‘own’; then you will find win-win resolutions with your neighbors. Reality is not a zero sum game unless you get played by these bastards.

I believe you. It’s likely and logical that there are influence operations acting on both sides. Indian media is pretty vulnerable to that sort of foreign take over. Telltale signs is to look for whether they are trying to influence youth with an agenda; they are psychopathic predators that go for the vulnerable most easy to sway. There needs to be nationwide awareness. For both nations.

What dalit India is griping about is the same issue the guppu republic of turkey gripes about…..lol. Both these idiota’s in Delhi and Istanbul know that the US harbors terrorists, but they can’t do anything about it.

He should STFU as the US isn’t sanctioning India for buying Russian weapons. What he says doesn’t matter as you can clearly guess why…

Pakistan’s army removed Imran Khan from power under US orders and we can guess what was the deal between them.

India is mad mainly because it knows the West going to use them to fight China sooner or later. Taiwan is small and has no power to fight against China, they are going to use India as cows to be killed and Japan as a powerful country to face China. S-Korea side with no one.

NATO: “Swedish arms manufacturer Saab is set to build a new facility in India to produce a shoulder-fired anti-tank weapon, according to a company executive, who noted that the factory would serve New Delhi’s armed forces in addition to more than a dozen other nations.”

NATO learned one thing in Ukraine so far, home manufacturer during a war is very important, and sending different weapons makes things harder for everyone.

Ukraine can’t fix its Tanks and there are two problems they face, Russian destroys any military repair sites, and they don’t have parts to fix their tanks. People miss the fact about Ukraine begging for NATO tanks, they lost a lot of their own and can’t fix them. They have to send their tanks to Poland and wait for them to be fixed and sent back (I’m not joking).

NATO doesn’t seem to want to send their own tanks to Ukraine as it would be destroyed by Russia and the world laugh at them, even more, the other problem again is they can’t fix whole different tanks and they must train soldiers to use those new tanks they never before used (it takes 6 months).