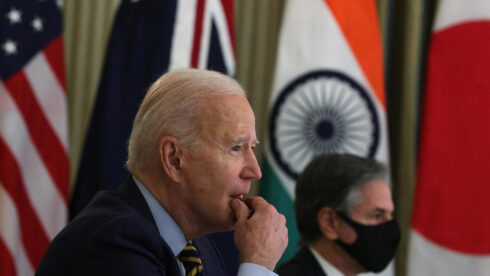 The issue of the Taliban will be discussed in the first-ever Quad summit, and it is once again all about containing China.

The US has announced the Quad’s first-ever Leaders’ Summit to take place at Washington D.C. on September 24. Last Friday, the Shanghai Cooperation Organisation (SCO) and the Collective Security Treaty Organisation (CSTO) held summit meetings at Dushanbe, Tajikistan. India was represented in the latter occasion and shall be in the former also. Currently Taliban-controlled Afghanistan and its evolving situation and regional security implications is a major topic in both summits. The Quad and the Taliban being mentioned in the same paragraph in many analyses and news pieces, however, is something new.

The SCO members adopted the Dushanbe Declaration, reaffirming the need for joint efforts to prevent terrorism. Afghanistan is mentioned: the SCO countries – many of which neighbor the country – expressed their support for an “inclusive” and “democratic” state there, with representatives from all religious and ethnic groups. However, SCO leaders Russia and China also called for gradual unfreezing of Afghan assets and increasing aid, otherwise the drug trade and terrorism could escalate, thus enhancing the current humanitarian crisis. The SCO approach, led by Moscow and Beijing, seems to be one of stimulating the new authorities in Kabul (the Taliban) in fulfilling promises of normalizing everyday life and bringing security.

India’s External Affairs Minister S. Jaishankar attended the Dushanbe summit, which was virtually led by Prime Minister Narendra Modi. The SCO, of which India has been a full-fledged member since 2017 is widely seen as a counterweight to NATO. It is a multilateral organization that mainly focuses on economic cooperation and security in the Eurasian region – with a special interest in issues of separatism, extremism, and terrorism.

As for the Quad, discussing the Central Asian country’ situation is a clear sign the group has now widened its scope. The Quadrilateral Security Dialogue (or Quad) is a strategic dialogue group comprising India, the US, Japan, and Australia. It was initiated in 2007 and its talks have been paralleled by joint military exercises, the Malabar Exercise. It is based on a shared vision for a “Free and Open Indo-Pacific”, with a focus on countering Chinese maritime claims and not on Central Asia issues. It is well known that China has been criticizing the US-led Quad and describing it as an Indo-Pacific NATO, aimed at containing Beijing.

At the top of Modi’s agenda at the coming Quad summit is a discussion on humanitarian assistance and regional issues. India wants the grouping to get involved in Afghanistan.

Indian foreign minister Jaishankar, speaking at the UN High-Level Meeting on the Humanitarian Situation in Afghanistan last week, called for global coordination to ensure “unimpeded, unrestricted and direct access” for humanitarian aid to Afghanistan. This is in line with India policies, as seen recently in its Vaccine Maitri (Vaccine Friendship) diplomacy, for example. New Delhi aims to use its soft power to assist developing countries and to project itself as a benevolent nation. Thus, it also aims to lead the humanitarian process in Afghanistan.

Here of course humanitarian and security concerns intermingle. New Delhi sees a risk of terrorism emanating from Afghanistan and impacting other South Asian nations. Of course, Pakistan, a traditional foe, is a concern for India too.

Although New Delihi has often seen the Taliban as a mere Pakistani proxy, there are, however, pragmatic reasons on both sides to engage in dialogue. India  has strategic investments in Afghanistan (worth billions of dollars) and the Taliban needs such projects to continue. In fact, New Delhi can offer much more to Afghanistan economically than Pakistan, having built dams, electricity grids, hospitals, and much more.

All QUAD members have invested somehow in Afghanistan, be it in terms of projects  or of blood and sweat. Japan too has been a major player in international assistance for the country and Australia has had its own development partnership with it. Its troops were also part of the US-led coalition that had been occupying Afghanistan since 2001.

The major concern for the US, Japan, and Australia, however, is China and its Belt and Road Initiative – not Pakistan.

Last Saturday, India and Australia (both of them being Quad members) held a “2+2” Minister-level meeting and displayed a common approach to the issue of Afghanistan: both countries have called for global action in the Central Asian country.

In August General Bipin Rawat (India’s chief of Defence Staff) said, at a New Delhi security conference, that “intelligence inputs” from India’s Quad allies would be “helpful” to fight the “Global War on terror”. According to Indian Retired Army veteran Colonel Jailbans Singh, who is also a strategic affairs analyst, the Quad should complement Indian humanitarian efforts in the Central Asian country.

Such statements and developments mark a potential expansion of Quad’s scope and concerns. The Taliban may be under the spotlight, but underneath the speeches, there is a geopolitical dispute for influence in Central Asia between the US and its allies on the one hand and, on the other hand, China. It was always about containing Beijing, be it in the Pacific region or at the crossroads of Central and South Asia, as is the case now. On Even ahead of the Quad summit, Chinese Foreign Ministry spokesperson Zhao Lijian described the grouping as a “close and exclusive clique” that is “doomed to fail”. China has maintained a pragmatic approach to the Taliban government and was one of the first countries to engage with it and to develop diplomatic channels with it.

This places India, a member of both the Quad and the SCO, at a rather peculiar position. Indian-Chinese differences aside, both countries share a border with Afghanistan and both have interests in the stability of this country: Beijing too has investments in the country and also doesn’t want terrorism spreading into its Xinjiang province. Thus both nations have much to gain from pragmatically engaging with the Taliban.

The question is whether India will pursue its own diplomatic tradition and its own view of the Indo-Pacific Region and Central Asia or simply play the American game, allowing itself to be a tool for US geopolitical interests in isolating and antagonizing China too much. Any regional cooperation that aims at regional peace must focus on mutual cooperation rather than on targeting a third party such as China.

Writer puts Pakistan administrated Kashmir inside the India’s map and tell us that India has border with Afghanistan!

Taliban has no chance of winning against either China or India so what?

Really? so you just made India the world’s biggest superpower. the last time anyone checked, the US was the greatest superpower on earth – duly defeated by the Taliban – so India can succeed with their pimp piss drinking army? LoL, you’re a joker

its a question of money and resources now. Otherwise the talibunny regime would collapse. Only Russia/ China/ Iran can provide the resources/ fiinances, otherwise the pashtu pig can’t fly.

Collapse? Iran is bankrupt LoL – Another colour revolution waiting in the wings – the West knows that Iranians have had enough of Mullah butt fuckers. Regime is surviving by repression. Go pat yourself on your back somewhere else. Iran cant help, China yes. First you were screaming “civil war” in chorus with ZioPigs, now you want the Taliban to collapse – LoL desperate Fireworshipping dingbat

“India Wants To Get More Involved In Afghanistan” LMFAO, Of course they want to- after their 6 embassies/spy dens were closed, Balochistan has been peaceful.Cowpiss drinkers need to stay in sh1thole hindooostan and wait for their Paki masters to come Fck them – Amateur article – I stop reading when someone mentions the GWOT – aint no such thing. you know the author’s an idiot or thinks we are.

Please stop bullshitting no? hendu covertly funding dalit wahabbi pashtu pig?…….pashtu pig don’t fly straight?……whose fault is that? I’m a smack your dad and fuck him in front of yous if yous disagree with me…..Don’t you fuck around basturd……We know you’d sell your dad’s ass in a heartbeat you muzlim basturd. I don’t want even a response from you or I’ll make you regret it.

Im fucking your mom and simultaneously buttfucking your sister and girlfriend (since she dont get no action because you luv Ars3holes better than pu$$y) shithole face. You are a firstclass Anus fireworshipper with zero balls. Im waiting for you b1tch

We’ll get you cunts soon. I hate Sunni bastards. You all should be quickly put to death like the vermin in the SyRaq. Just thrown alive in giant death pits and then covered with dirt! Just like that.

The Indian admin wants to do for the people of Afghanistan what they have done for their own people. Which is, not a lot.