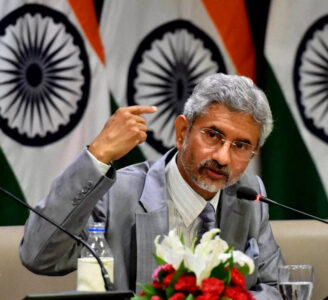 Indian External Affairs Minister S Jaishankar shut down any ideas of implementing the West’s price cap on Russian oil when speaking to his German counterpart Annalena Baerbock. He also highlighted the fact that his country’s procurement of Russian oil was just one-sixth of the European purchase in the last nine months.

At a media briefing following their meeting in New Delhi, Jaishankar noted that Europe can’t make choices to prioritise its energy needs while asking India to do something else. The minister also stressed that discussions to expand trade relations between India and Russia started well before the special military operation in Ukraine began.

Baerbock arrived in New Delhi on December 5 for a two-day visit to not only discuss Russia and the war in Ukraine, but to cut delays in the issuance of visas to Indians, the situation in Afghanistan, developments in the Indo-Pacific region, and cross-border terrorism from Pakistan. In these discussions, the German minister somehow felt justified for a South Asian country to impose sanctions because of a conflict in Europe, and for this reason Jaishankar strongly justified India’s expanding ties with Russia.

Jaishankar’s comments come as the US, EU and Australia imposed a $60-a-barrel cap on the price of Russian oil.

“We need to have an understanding that a finite amount of energy resources is available. There is a conflict situation, and we understand Europe has a point of view. It is for Europe to make its choices,” the minister said. “(But) for Europe to make choices that prioritise its energy needs and then ask India to do something else … bear in mind that a lot of buying by Europe is from the Middle East that traditionally has been a supplier for an economy like India.”

He then highlighted that Europe’s purchase of crude oil from the Middle East was now putting pressure on prices, before emphasising that: “We have been very understanding of the European choices and European policies.”

The minister also said that Europe bought much more oil and other energy sources from Russia than India since the conflict in Ukraine began.

The West is frustrated by India significantly increasing its imports of Russian oil in the last few months. India’s leaders, to Western dismay, prioritise Indian consumers and not Western geopolitical interests. Due to this position, India imports Russian energy at the most advantageous terms.

Baerbock attempted to demonise Russia during her visit to New Delhi, despite Russia being a long-time partner of India, by saying that the “brutal war of aggression of Russia against Ukraine” has had a global impact. Describing the military operation as an “illegal war,” she said it has brought the whole world to a “very difficult situation.”

“It also created difficulties for your country (India) when it comes to energy supply and fertilisers,” the German foreign minister added.

Deflecting the German attempt to put guilt on India, Jaishankar stressed that his country’s overall position on the conflict is “very clear and very public,” adding: “The Indian position articulated by my prime minister is that this is not an era of war and that dialogue and diplomacy is the answer.”

It is recalled that on November 9, Jaishankar met with Russian Foreign Minister Sergey Lavrov in Moscow and stressed that India will continue buying Russian oil. As India is the third largest consumer of oil and gas but still has a low average income level, leaders in New Delhi have the responsibility to find the most advantageous terms on international markets instead of serving Western interests.

“And in that respect, quite honestly, we have seen that the India-Russia relationship has worked to our advantage. So, if it works to my advantage, I would like to keep it going,” Jaishankar said in Moscow at the time.

India, a major purchaser of Russian-made weapons, has refused to support Western sanctions on Moscow despite sustaining pressure to do so for the better part of 2022. New Delhi has repeatedly urged for an “immediate cessation of violence” in Ukraine but continues to abstain from UN resolutions critical of the Russian military operation.

Russia and India share decades of close relations, especially because the West prioritised relations with its neighbouring rival, Pakistan, even to the point of becoming a major arms supplier and funding jihadist groups. For this reason, among others, India will not succumb to Western pressure to cut its relations with Russia, let alone impose a price cap.

Essentially, India’s fully justified decision is that, If the US wants wants another war of choice for its own geo political gains many thousands of miles from the USA, the USA should spill US blood and treasure.

India has no reason or need to become a US proxy in another US war in Europe or elsewhere in the world.

Sunak isn’t even Indian, moron, he’s a Pakistani origin Hindu who was not even born anywhere in South Asia, and more likely than not he’ll be gone in 6 months.

What desperate or something? Sunak cares about UK and the rich people there mostly. And Israel is recognized by China, Russia and Brazil also and now new countries like UAE, Bahrain, Oman, Morocco and Sudan recognize it.

I’m sure that Mr Jaishankar knows that there are consequences of being a member of BRICS. If he doesn’t, then someone should tell him.

He should also be aware that the boycott of Russian energy serves two purposes for the NWO. It attacks the revenue stream of the Russian admin and it also restricts India from developing. The NWO is trying the same on other continents, such as Africa and South America.

Don’t swallow the US koolade. They are almost finished on the international stage. When the dollar is toast, no more bribing, no more export of US debt, no more precious metals and market manipulation, no more international clout.

You say about NWO but not only US and NATO states are part of the UN but everybody.

The UN is the US and nato. The rest of the members are there to make up the numbers. This is obvious from the lip service paid to some members when it suits the management.

The BRICS alliance will not fall but it will grow stronger. New members also want to put themselves in.