On January 1st, two Indian soldiers were killed at the Line of Control (LoC) between India and Pakistan in Kashmir, an Indian military spokesperson said.

The two soldiers were killed when Indian forces were attempting to intercept an alleged Pakistani infiltration attempt.

The search operation had been launched following information about the movement of suspected militants, the official said.

Less than a week earlier, the Pakistani military reported that India had violated the ceasefire, and as a result of a clash several soldiers, and a civilian died.

Pakistan’s Inter Services Public Relations (ISPR) said the soldiers had been killed while responding to cross-border fire from the “enemy” and that the forces had damaged an Indian post, killing 3 Indian soldiers.

Pakistan said it lost 2 soldiers and 1 was wounded.

In response, India said that Pakistan had, in fact, breached the ceasefire in north Kashmir’s Baramulla district. The Pakistani soldiers had allegedly opened fire, killing one Indian soldier and one civilian.

The Indian army added that Pakistan had resorted to heavy firing from small arms and “also fired mortars and used artillery fire.”

Tensions escalated between the two nuclear-armed countries after February 14, when 40 Indian security personnel were killed in a bombing attack in Kashmir.

The situation was exacerbated even worse when India stripped Jammu and Kashmir of their special status on August 5th, 2019.  Pakistan claimed that the move was aimed at purging Muslims from the region and both countries were on an apparent warpath for days. The tensions de-escalated, but the situation remains tense.

In a report, the Jammu and Kashmir Coalition of Civil Society (JKCCS), a local human rights group, said there were “mass arrests, torture, killings, use of excessive force, harassment, and intimidation” after the abrogation of Article 370.

“The year witnessed at least 366 killings in different incidents of violence,” said the report, which said there were “extrajudicial executions of at least 80 civilians, besides killings of 159 militants and 129 armed forces” in 2019.

Among the 80 civilians killed in 2019, 69 were killed after August 5. Twelve of those killed in 2019 were women and eight children, according to the JKCCS report.

“Besides becoming victims of extrajudicial executions, children also faced illegal and unjust detentions, ill-treatment, including torture, at the hands of armed forces during detention,” said the report.

In 2019, tensions have seen a rise between the two countries, with both of them focusing troops along the Kashmir LoC.

India, in November 2019, announced that it was planning to test its new 3,500 km range K-4 nuclear missile.

“As per plans, the DRDO will carry out test-firing of the K-4 nuclear missile from an underwater platform off the Vishakhapatnam coast on Friday. During the trial, the DRDO will test the advanced systems in the missile system,” government sources said. This report took place just days after India tested its nuclear-capable surface-to-surface medium range missile – the Agni II. The ‘Agni-II’ missile has a strike range of 2,000 km and is an intermediate range ballistic missile. It has already been inducted into the armed forces.

The Indian Air Force carried out the successful firing of BrahMos surface-to-surface missiles from a mobile platform in October to check the IAF’s capability to hit targets with “pin-point” accuracy at targets close to 300 KM.

Around the same time, on November 5th 2019, Pakistan reportedly tested a 650 km range surface-to-surface nuclear-capable ballistic missile – the Shaheen I.

The Shaheen-1 missile is capable of delivering all types of warheads up to range of 650 KMs, the Inter-Services Public Relations (ISPR) tweeted.

Pakistan successfully test-fired nuclear-capable surface-to-surface ballistic missile ‘Ghaznavi’ with a range of up to 290 kms on August 29th, days after India revoked Jammu and Kashmir’s special status on August 5th.

Thus, the arms race is already a fact, and 2020 begins with the usual reports of ceasefire violations.

India should be ashamed as it is being humiliated daily by a country a tenth of its size. India has no stomach for a rematch of the newly delivered Rafale against the JF-17 Thunders LOL…..

Why would they be “afraid”?!
Are you cheer-leading for the war here?
JF-17 is definitely not better than F-16 thus not better than Rafale either.
Except if one goes on Pakistani forums and listens Pakistani fun boys JF-17 is for them probably better than F-22 and SU-57….
Actually it is possible to say that JF-17 is not match at all to Rafale.
So I do miss the funny part in your “joke”.
You try to ridicule here the country that is militarily definitely not behind Pakistan on any level.
All that looks like hidden agenda and warmongering in way.

Lighten up Francis, are you Indian? then stop committing a Zionist style holocaust in Kashmir. The Pakistanis have a better airforce even though they are Zionist arsekissers too and totally controlled by Americunts as their economy is deadbeat.

I hate when people cheer leading for the war in Asia that is actually on US-State Department agenda (to do list) !
War between Pakistan and India would be catastrophe for all Asia , Chinese “Silk Road”, Iran all Central Asian countries Afghanistan and Russia & China (including their plans for the future)!
The only country to have direct interest in that war and destabilizing whole Asia is US!
So I should now copy you and ask; “Do you work for CIA or are you American?”only alternative to those options is that you are “useful idiot” of Pakistani or some Muslim origin who dislikes India and cater for the US-globalist terrorist interests.

No I am not Indian or convert to Hinduism or French.
I am just the guy who can read.
So I know 100% sure that JF-17 is not better airplane on any level against Rafal (how much better that is the question for the experts)

Your rant is idiotic to begin with, it is Americunt agenda to use a beggar dirt poor India to use as a “counter to China”. Pakistan is also used by the US as a convenient Wahhabi terrorist cannon fodder. However, India has a extreme right Hindu government that is killing people in Kashmir. I believe a nuclear war between India and Pakistan is inevitable due to poverty and population pressures. South Asia is small shithole with 2 billion of the world’s poorest people. The only winner is China.

India can’t counter China let alone China & Pakistan together!
Only fun-boys like yourself are obsessed with whose d**k is bigger while facts are quite clear.
At the moment India is not match to China, Pakistanis is not match to India.
And only fools are cheering for the wars between nuke countries! 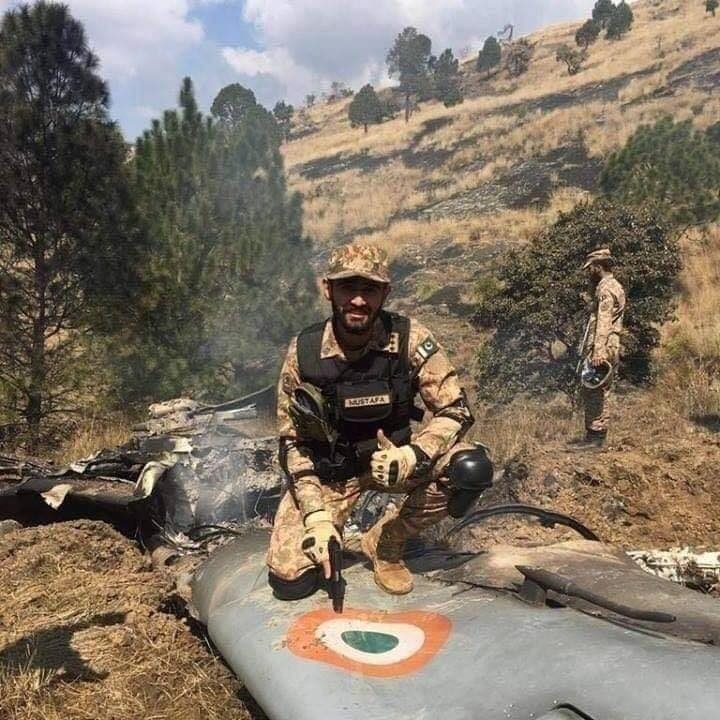 Wreckage of one of the Indian migs downed by Pakistanis

If Indians had any shame they should have sent a Rafale over the line of control than crappy Migs and Sukhois to be shot down. I had posted last Feb, that IAF is incompetent and has no balls and time has proven me right. Personally, I don’t give a flying fuck about south Asians so can can enjoy your curry and rant. Tata.

JF-17 is Chinese modernized MIG-21 design with plenty of modern gadgets.How that can possibly make “crappy” MIG-21 that is one of the best jets ever made in aviation-history…
MIG-21 is just extremely old but not “crappy”
All Chinese aviation is based on Chinese illegal COPIES of the MIG’s and Sukhois jets that you call “crappy”

Chinese design was BASED on MIG-21 tech so call it any way you want or play with the words on your own in free time.
I am not interested in futile conversation

Sorry, I don’t buy baloney :) it is not healthy for the system.

Whatever .
You butt-hurt are trying to keep composed posture(appearance)
and that works with the people who don’t know much on military aviation.
But people who do know lot on subject will laugh at your comments (which I didn’t do but you are now starting to get on my nerves with your persistence even though you are wrong in some of your comments)

I don’t need that you admit anything.

What the hell are you talking about, you are talking like child?! How old are you 10?!

And yeah I can get upset with stubborn people like you, persistent in talking total nonsense.
You have nothing to say that makes sense yet you keep parroting nonsense all the time!
Pakistan has nothing that can match Su-35, MIG-35 and SU-57 not even close yet you keep talking rubbish.
That only show how biased and incompetent you are!

Give me a single example of a SU-30/35 or even a MIG-29 in combat against a western aircraft? So far the Arabs and Indians have been sending 3rd or 4th generation crappy Ruskie junk against superior western technology. I am no fan of Americunts, but their planes are the best so far. Flew the F-5 and F-4E for over 30 years, so know a thing or two.

I will not enter in another endless and empty conversation with you.
You have called Sukhoi’s and MIG’s crappy yet ALL chinese aviation today is based on their copies while you glorify JF-17 that is based on that 60 year old tech!
So that contrast speaks on your objectivity.
And I can say it loud and clear with no problem that ANY modern SU-30SM or SU-35 or MIG-35 can eat for breakfast your precious JF-17 (not to mention SU-57)
So call them whatever you want.

SU-30MKI will be outmatching your JF-17 easily in any situation.

They would shoot down your JF-17 before they even come close to Sukhoi’s and out-fly JF-17 completely if they ever get in dog fight.

Without Chinese help Pakistan is no match to India in any possible way.
And I do not think that China is enthusiastic for another war in the region close to her border and close to Central Asia that is already unstable (because of Afghanistan and growing danger of terrorism there)

China has invested billions in CPEC and Gwader port and is not about to let Pakistan down, even though Pakistan is a Wahhabi terror cesspool. The Indians with the fruitcake Modi are just helping Pakistan’s image by committing atrocities in Kashmir.

You are confusing everything
I don’t think that anybody normal wants this war.
Let alone that India would plane full scale war or any kind of invasion of Pakistan or opposite that Pakistan is planing something like that.
The only true danger is nukes.
The fact that both countries (unfortunately ) have nukes gives them obligation to act much more responsibly and with much more restrain.
Just like China and India are doing now.
Kasmir should be used something that brings countries closer not opposite.

Dude I am sure you mean well and are a rational guy, but look at their history since 1947, they have fought 4 wars (including Kargil 1999) and the devious and unnecessary partition of India by the backstabbing limey gits caused a million deaths in the mass migration of Hindus and Muslims to India and Pakistan. And you think they can live in peace? not a chance until the Kashmir issue is resolved, which is just like Palestine to them.

Whatever you say there proves my point!
Huge wounds of the past need RADICAL strong medicine only!
Nothing else would work.
Kasmir should be something that unites India and Pakistan!
If not the conflict will be useful only for enemy of Pakistan and India and China GROWTH !This is historic moment for Asia to take over leadership from US and Europe

Countries like US, UK etc. will be happy if they don’t chose that option!

Or….India and Pakistan can’t really go to full war and they refuse peace also… so they will depend on China forever and stay less developed region of Asia.