On August 14th, the Parliamentary Voice of Ukraine newspaper reported that the Ukrainian Autocephalous Orthodox Church (UAOC) had ceased to exist.

This followed a July 29th decision, by the Unified State Register of Legal Entities and Entrepreneurs, to make a record and terminate the existence of the religious organization Patriarchate of the Ukrainian Autocephalous Orthodox Church.

This decision was simply a continuation of the creation of the non-cannonical Orthodox Church of Ukraine (OCU), with backing from the government of then-President Petro Poroshenko The OCU was established on the basis of two other non-canonical cuhrches: the Ukrainian Orthodox Church – Kiev Patriarchate (UOC-KP) and the UAOC. On January 5, 2019, the Ecumenical Patriarch Bartholomew signed Tomos about the autocephaly of the OCU.

It took almost 8 months to finalize the UAOC’s closure, with the UOC-KP still struggling to remain alive, and actually succeeding, since the OCU can’t convert any churches without resorting to violence or “Black Registrars.”

To provide an example of how the OCU attempts to expand, on August 11th it was reported that clerics and their “assistants” cut down the locks of the gates of a church of the Ukranian Orthodox Church – Moscow Patriarchate (UOC-MP) in the village of Bobly and assaulted believers.

On Sunday, August 11, 2019, representatives of the newly-created OCU under the singing of “prayers” of their “priests” illegally entered the Holy Protection Church in the village of Bobly, Turi district of the Volyn region, and fought directly in the church, the Information and Education Department of the UOC-MP reported.

As Archpriest Vitaly Duda, Diocese of the Turi District of the Vladimir-Volyn Diocese, said that the representatives of the knew that the abbot was doing divine services in another church that day and the Holy Protection Church would be closed.

The first door was relatively new, the second door they destroyed was 200 years old. 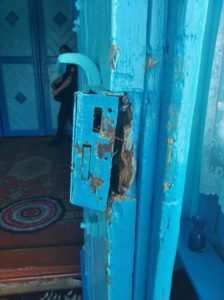 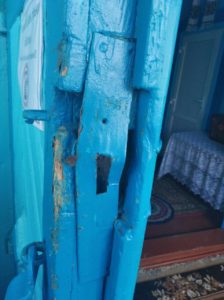 When the believers of the Moscow Patriarchate began to gather in the captured church, OCU provocateurs organized a fight inside the church.

“Our believers prayed continuously until noon on the threshold of their temple,” added the diocese. – “And when I arrived at the scene after the service, I saw this situation. I spoke with the police and local authorities so that there would be no confrontation and a conflict situation, and we agreed that the representatives of the “OCU” would leave the church. The chairman of the village council, who supports the newly formed structure, had to persuade them. In the end, they still came out, and the temple was closed with two locks – ours and theirs.”

As a result of the provocation, the Moscow Patriarchate believers wrote a statement to the police on the fact of illegal entry into the church building and deliberate bodily harm.

Archpriest Vladimir Matsuri, press secretary of the Vladimir-Volyn diocese of the Moscow Patriarchate, said, only 25 people voted for the transition to the newly created Ukrainian ‘independent church’, while 956 people live in the village and most of them who are real parishioners wished to remain under the Moscow Patriarchate.

The political party “Servant of the People”, which by a wide margin won the parliamentary elections and has a parliamentary majority, plans to abolish the Committee on Culture and Spirituality. This was announced by the former people’s deputy and the current head of the Committee Nikolay Knyazhitsky on Facebook.

According to him, it was proposed to transfer the functions of the Committee to the Humanitarian and Information Policy Committee, with which Knyazhitsky categorically disagrees:

“I expected such attempts, but hoped that if Yanukovych didn’t decide on this, Zelensky would also stop. In vain. “

According to Knyazhytsky, the new Committee will not be able to combine the functions of managing culture and spirituality with issues of sports, tourism and family relations:

“It is obvious that a combination of such areas as culture, religion, spiritual heritage with the media market, tourism, and sports testifies to a lack of understanding of the functions of the Parliament and the developments that have taken place over the past 5 years. “

Knyazhytsky believes that in a country that is fighting for a place in Europe and in which the war continues, the Committee on Culture and Spirituality cannot be abolished:

“In Ukraine, which is fighting for a place in the EU, it is defending itself in a war with Russia, it is a changing post-colonial society, culture and spiritual heritage are the main areas of public policy, the role of which the enemies of Ukraine are constantly trying to reduce.”

Nikolai Knyazhitsky is one of the most active representatives of the departed government, who fought against the Moscow Patriarchate.

Ukrainian regime trying to change entire system of Ukraine for saving its government but at the end the net result would be obviously nil. Now another crime to attack on people faiths.

It won’t work. Pushback. I see Volyn, this means NW UA, so the usual OUN suspects I suspect.