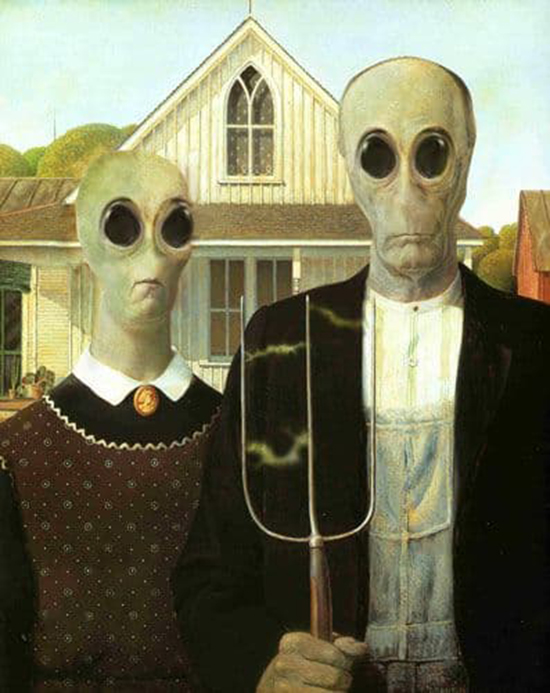 The Galactic Empire is coming, and its coming to the United States.

That is, if one would trust the astronomical (pun intended) increase in UFO sightings reported in New York in 2020.

According to the National UFO Reporting Center.

Brooklyn is tops in tin-foil hatters, with 12 close encounters. Not far behind are Manhattan with 11 and Queens with 10. Staten Islanders claim just eight — despite the borough’s rep for not social distancing. The Bronx is even more grounded – just 5, pathetic, really.

As reported by the NYPost, two situations are the most interesting.

In the early hours of July 21st, a citizen of Staten Island stared at an “oval” aircraft that “looked and sounded like a helicopter. Then, the mysterious flying machine “sent a surge of heat/radiation through my body!”

The Islander “honestly thought it was the government putting something into the air with everything going on during these times and I thought I would wake up and find it all over the news or on Instagram.”

In Bronx, on June 8th, a man watched 30 objects “flying in a perfect line, in perfect synchronicity” that “looked like a bunch of moving stars.”

The observer insisted, “I don’t drink, or take any drugs whatsoever. I’m not a UFO conspiracy theorist.”

Throughout 2020 there were other odd incidents, such as the time when the US Department of Defense released a plethora of alleged UFO sightings videos, back in April.

On December 18th, Obama-era CIA director John Brennan described the declassified Pentagon UFO videos as “eyebrow-raising” and has said they should be treated with an open mind.

“I’ve seen some of those videos from Navy pilots, and I must tell you that they are quite eyebrow-raising when you look at them,” Brennan said.

Among the several recently-declassified videos was the so-called ‘tic tac’ craft captured on camera by Navy pilots in 2004.

“You try to ensure that you have as much data as possible in terms of visuals and also different types of maybe technical collection of sensors that you have at the time,” the ex-director explained.

When he was asked about whether he thought aliens exist and have visited Earth, Brennan said it is “a bit presumptuous and arrogant for us to believe that there’s no other form of life anywhere in the entire universe,” but added that it may not fit the bill of what we necessarily think of as ‘life’.

It is likely that he, too, similarly to Israel’s former space security program chief, Haim Eshed, knows about the alien’s Galactic Empire, but he is still not allowed to speak about it.

After all, Eshed revealed that the aliens only spoke to Israel and US, but it could be that Brennan decided to save that ace up Washington’s sleeve.

Brennan joins the ranks of a growing number of senior officials from around the world who have expressed a particular curiosity about the apparent ‘x-files’ which were declassified by the Pentagon in recent years.

“The federal government all these years has covered up [evidence about UFOs],” former Senate Majority Leader Harry Reid said in a recent documentary.

Eshed, notably, said that the US had a manned, underground base on Mars, but declined to provide any proof.

He added that outgoing US President Donald Trump almost found out the truth before he was stopped by “The Federation” to prevent mass hysteria on a global scale. Allegedly, they didn’t want him to spill the beans.

Ex-CIA Director Brennan may have received the same instructions.

“The UFOs asked not to advertise that they are here, [because] humanity is not ready yet,” Eshed told Israel newspaper Yedioth Ahronoth, adding that US President Donald Trump “was on the verge of finding out, but the aliens in the Galactic Federation say: wait, let the spirits calm first. They don’t want us to have mass hysteria.”

“They want to make us sane and understanding first. They waited until today for humanity to evolve and reach a stage where we will understand what space and spaceships are.”

The former Israeli official also said that “They signed a contract with us to experiment here,” offering no details about the terms of the alleged interplanetary deal or the nature of the experimentation.

Former Israeli space #security chief Haim Eshed has revealed that aliens from a "Galactic Federation" have been in contact with the US and #Israel for years, but humanity isn't ready to know this.

Or so he claims.

It could be that the Galactic Civilization is preparing for when we are ready, and that is why it is increasingly appearing to New Yorkers, and it is doing so in an year where people around the world have undergone great mental strain, due to a pandemic that forced to sit at home for increased periods of time and be alone with their thoughts, whatever they are.

If the CIA and Pentagon says it is true and there is a bizarre scenario where they think it scares our perceived enemies, then it is a lie.

The tell for me was when they said that sitings were most common around military bases and nuclear power plants. They just couldn’t resist a little narcissism. LOL aliens who can travel 40,000 light yrs plus in days have as much to learn from our technology as we do studying spears made by caveman. They might look at our missiles for a week or two out of general curiosity but our biochemistry would be more interesting than our feeble technology. Unless maybe, they know something we don’t, like everything is going to explode in 20yrs and they are amazed that we haven’t figured it out yet.

Considering that we are far from being the most evolved or complex lifeforms on this planet I seriously doubt we have anything of interest to aliens except in the same way that we slow down and watch car crashes on the highway.

Maybe they’ve discovered that where you find humans you also find weed and magic mushrooms?

Maybe their interest in missile silos is because they can’t believe we were stupid enough to not only make a poison like plutonium …. which doesn’t occur naturally …. but continue to make it after we figured out it’s half life is 25000 year and we store it in containers that will be lucky to last 200 years … or store it in earthquake zones, or flood zones, or just dump it in the ocean in concrete and steel containers.

Personally I believe we came in first in the galaxies Darwin awards and what we are seeing is disaster tourism.

Maybe we are a tolerable version of faux gras :-)

All I can say is that IF the aliens have chosen to land in the US, they must be even dumber than a Democrat voter:)

where do u want them to land ? in a communist dictatorship like china ?

Aliens will be forced to return because excessive groping. https://genesiustimes.com/wp-content/uploads/2019/07/biden-area-51.jpg

Hahahaha, dude that twisted crap made my day, hahahaha.

The first radio wave TV emission, also in color, was Olympic games 1936. in Berlin. “Imagine Aliens watching it, also watching all those wars, killings, rapes, etc. If after all those intel from waves, they’d like to visit us, it wouldn’t be in peace.” – to be honest , can’t remember the scientists name who made such remark, but I gave him and still hold him thumb up for it.

Galactic civilization would have absolutely no reason to contact a petty planet, where several factions is still fighting for resources and whose future is absolutely uncertain – we may very well end up as destroyed, radioactive, lifeless rock..

They will confirm that the Chosen People are recognized as such also throughout the galaxy and we should all submit to Jewish usury.

If they’re really here, I hope they’re not supporting the globalists plans. Or we really are fucked.

Can you please go back to geopolitics ? Your credibility is damaged by such senseless stories…

F-15 guncam video of more advanced aircraft than we have is senseless? You’re senseless.

Is this one of the reasons that so many go missing in the wilderness?