As of January 6, mass clashes continued in the cities of Kazakhstan. Last night, military entered the city of Almaty.

In early hours on January 6, the Kazakh military on armored vehicles took the armed rioters in a ring in the center of Almaty. A shootout was reported on the square.

The police in Almaty reported that rioters attempted to storm the building of the department at night. As a result, dozens of attackers were eliminated.

According to the official reports, 12 law enforcement officers were killed during clashes in Almaty. 353 employees were injured.

At night, a body of a unidentified decapitated man was found in the city.

The exact number of victims among the civilians is yet to be revealed. According to the footage shared online, a big number of citizens were killed during the clashes by armed protesters as well as by members of local gangs.

Protesters in Almaty are now surrounding hospitals. They do not let patients and medical staff to enter. Clashes with the police broke out near the 7th city hospital.

The work of all financial institutions in Almaty, namely second-tier banks and the Kazakh Stock Exchange, has been suspended. The decision was made following the failure of the Internet, as well as in order to ensure the safety of employees.

Local sources cited witnesses claiming that there are no ”usual citizens” on the streets in Almaty, people are staying at home. There is allegedly a crowd of young looters on the streets, mainly migrants, who are coordinated by ”armed people in black SUVs in camouflage.”

According to the CSTO’s official comment, the situation in Kazakhstan is considered as an invasion of gangs trained from abroad.

In order to contain the armed crowds, the advanced units of the CSTO contingent are already deployed in Kazakhstan.

Tajikistan claimed its readiness to take part in the CSTO operation to assist Kazakhstan.

Footage of the departure of Russian peacekeepers to Kazakhstan was released by Zvezda TV.

Russian An-124 and IL-76TD were spotted flying to Kazakhstan on January 6. More aircraft at Russian Chkalovsky airfield are loaded and are ready for the departure. In total, at least 10 IL-76 and 3 AN-124 are reportedly involved in the CSTO operation. 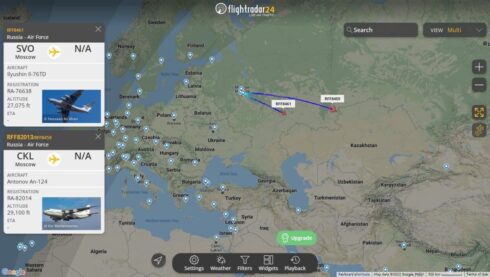 Our globalists just want to place some rockets in Kazakhstan to “protect” Russia… O, next is Mongolia…

They will fail as usual. The glory days are iver for the U.S. Now its one defeat after the other.

Your idiotisme contnue. This is not only USA but also EU, China, Japan and many others.

I see problems for the world economy. They are not in USA only. So far USA is number 9 in GDP pr capaita for the world and by that also can decline from a very high level.

Go and buy You an empty hose in China. Thats were the next big problems are, if they are not sold.

Another regime change by the zios which will fail as usual

So are Kasakstan runned by jews today or are those demonstraters runned by the jews – or two kinds of jews?

According to Yourself it would be very strange if those zionists wasnt leaders there today.

The Leader today kindly assisted by Putin seemes to behave like Netanayho. “shoot away those criminals and gangs…”.

You forgot Uzbekistan, Tajikistan and Turkmenistan. They probably will be before Mongolia.

I dont see those to be armed. I see them as markets, where the rest of the world now can integrate and raise their livingstandards if they produce. Thye hardly did in the USSR.

They are easy to see. Russia and USSR stole those emirates and sultanats by military forces step by step by militaries building fortres and attaclines.

Thats exact the same for Caucasus as well as Western Europe all the way to west of Berlin. By the way the Krimera Khanat was taken by hard figtings too.

I see none of that. I see we wish them to devellop well by better economy and social systems being more semilar to ours.

They cant buy Our stuff and vice versa if they dont produce. None should live in neocolonialisme there anymore.

Its normal relations for the rest of the world not being handcuffed in dayly life decided by some nasty big brother. They are not demanded to but asked as well as being an investment both ways.

Kasakstan has about 80.000 soldiers in their miliatry forces, but not a single one here wonder why Russia has to invade.

Its exact the same reasons as for Belarus. No needed reforms are allowed.

Sorry 3 little barking sheep. It only was 67.543,5. One female soldier was pregnant.

Story from Danish brothel: jens and 3 barking sheep. One of them is his mother.