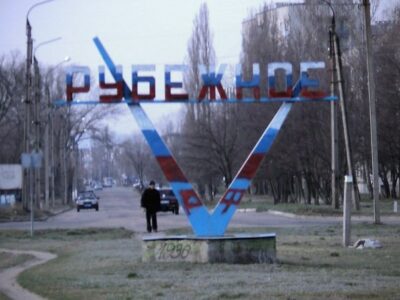 Forces of the Luhansk People’s Republic (LPR) supported by Russian units are slowly advancing in the town of Rubezhnoe located on the northern outskirts of the city of Severodonetsk. Units of the Armed Forces of Ukraine (AFU) have left residential areas and hold control over the industrial facilities on the southern outskirts of the town.

An LPR soldier who participated in the storming of the fortified area reported that the AFU soldiers provided fierce resistance.

“Machine guns were working, snipers were constantly working. They were drugged, they were not afraid of anything.” – the soldier said.

The video confirms that the Ukrainian troops left the building in a hurry, leaving their sleeping bags and equipment.

The LPR soldier explains that Ukrainian soldiers have left residential areas in Rubezhnoe, as there are mostly new houses, while facilities in the industrial area were built in the 50s. They are much stronger and better suited for defense. There are also bunkers and underground passages.

In bunkers, there was chemical protection equipment, gas masks in case of a chemical attack. First aid kits with drugs were also found in the basements.

Earlier, the soldiers of the Armed Forces of Ukraine have carried out at least one chemical provocation in the city of Rubezhnoe. On April 5, they blew up an acid tank in the 1st workshop of the Zarya plant.

I’m reluctant to believe anything I don’t see myself. Any images can be constructed.

TRUSS IS THE TRANNY LOVING LOSER
Reply to  Anonymous

Your the gutless truth assasin thats your problem not the 100% factual evidential truths,cia/mi6 creep

how do you trust your lungs not to deliver carbon monoxide? After all, you cannot see 21% oxygen nor the 79% nitrogen nor have you ever seen your lungs, and yet you live.

You silly trolls are so embarrassed at HOLOLASSHOLE loses that you now troll anonymously. The Uki Nazis are getting whacked. SLAVA ROSSIYA!

Joe Biden is another Disney creation. It appears that the Ukies are mostly captagon drug addicts and in their chaotic minds they are Rambo’s :)

Why don’t you go there and see for yourself then.

Crazy. Everything is destroyed, burned, abandoned. This is what the “liberation” of the territory looks like in the Russian way. As Russia has no funds for reconstruction, no investment, so there is no future, no one will want to live there and territory will remain barren and empty forever as long as is under Russian occupation. Sad, very sad.

See, that’s what people are ready to maser who do not deny their race and do not wanna be force mingled with negroes and serve jews like americunts.

I didnt read anything about Russia when i made my comment. sorry will educate myself

Whoa whoa, there’s so called negroes on here man. We’ve had negro Soviet soldiers and negro Russian aristocracy. Mingling with people ain’t the issue, throwing race in people’s faces every chance they get is the problem.

You haven’t traveled much have you? Bigotry is a combination of ignorance and fear. Travel a little around the world and you will not be so scared of people who are different. We all bleed red.

Peter The Ungrateful
Reply to  Just the Facts Jankowicz

Jankowicz is the crossing guard at Sesame Street’s intersection of Mind Control Boulevard and Hitlerstrasse.

Here a perfect example of the russian lover racist nazi that populares thís site. Congrats everyone

Liberation of Iraq looks exactly the same and the country is still under US occupation. How is that different? Ah… oh yeah you are still looking for WDMs but shhhhh listen they are actually in Ukraine.

my knowledge about war and politics is not that big. so you have to use smaller words for me please.

Peter The Ungrateful
Reply to  Cop

The bad guys are the UkraiNaZis. That small enough for you?

We are still waiting for the reconstruction of Iraq, Afghanistan, Libya, Syria etc by US “democracy”. All the carpet bombings that destroyed these countries, all for the US hegemony.

yeah… america is fucked i know.

I think Russia will invest heavily to rebuild this. Probably inviting Chinese too.

As for destruction, it was a choice of Ukrainian army to defend cities in a way they did. Population fled, first wave already left in 2014-2015, those escaped mostly to DNR / LNR or to Russia, and those who remained mostly left in last two months. Some unlucky ones, who waited too long, became trapped, as human shield, while cities were turned into urban fortresses, defended at all cost.

For instance, Melitopol and Herson were captured by Russia without a scratch. Population was safe, those who wanted to flee to Ukraine controlled land were not hindered. What was the difference? Herson was mostly Ukrainian city, unlike Mariupol, so one would expect even more destruction in Herson. It was just a strategy of Ukrainian army, to defend cities regardless of cost of human lives, and damage to city itself. They were too slow to turn Herson and Melitopol into urban fortresses, i guess.

yeah my knowledge of Russia is small. I am glad i am getting the help I need

Russian will be blown off back if they continue slow like this.

Peter The Ungrateful
Reply to  mistiick

It’s called “Total Defense”, what the UkraiNaZis are doing. Don’t mind the similarity to “Total War”, coined by the Third Reich, that’s on purpose. They also destroy the “pro-Russian” cities themself in an attempt at scorched earth tactics. They consider the Russian speakers subhumans, so they are fair game as human shields and target practice.

Watch Patrick Lancaster’s videos on Mariupol. Refugees from there said that 70-80% of the destruction was done by UkraiNaZis. They are a cynical bunch. First they kill Russian speakers and destroy their homes on purpose, use them as human shields and then they sell it to western media as “Russian Atrocities”. And the idiots in The West eat that shit like candy, ask for seconds and lick the plate.

Death to the ukraine
Reply to  Cop

Like an american “liberation” where innocent civilians get bombed to death, then get their country filled with negroes and jews that take over your government, with homosexuals on the streets, corruption (lobbying), that’s american liberation

The destruction you are seeing is 8 years of shelling by the ass-off Naazees. I will give you the benefit of the doubt and consider you a Johnny come lately who was uninformed for the last 8 years instead of a troll. Putin did not invade Ukraine, Putin went into Ukraine to end a genocide started by Porcochenco when he stated ” our kids will go to school … (i.e. live normal lives and your Southern Ukrainian children)… will live in basements. Why live in basements? because of relentless shelling. Ukrainian Nationalists bullied and genocided a weaker group of people for 8 years and now they are getting bullied. Shouldn’t stronger nations go to the defense of weak and oppressed population?

Haven’t you seend the same in Iraq, or numerous other US wars? Russian are still soft, total amount of civilian death confirmed by UN(nor propaganda figures from Kyiv) is still less than the number of civilian deaths in first week of Iraq war. Russia would have benefit a lot from killing civilians and carpet bombing.

Well, see images of Grozny today : a beautiful and modern city. Hope this is the future of liberated zones in Dombass.

contractions of pocket sizes should be evident in the coming days. If there is leadership on the UA side they would be pulling everything back to at least Npz at the very least if not back to Bakhmut before the trap springs shut on them. two huge pockets smell the demise of nearly another 1/3 of the UA standing army. anyone know what round of conscription the UA is on now? 20-30?50? it was 14-15th in 2015

Peter The Ungrateful
Reply to  BanderiteLivesDon'tMatter

Probably not enough fuel left for retreat with equipment. Sure, they can walk, but then every soldier will be relegated to infantry. And don’t get me started on lugging all those ATGMs and MANPADS around.

Well, those close quarter fights are about to come to an end if Putin declares war. Just extermination, total extermination

NO RETREAT NO SURRENDER…REMEMBER BUCHA!!!

Ever heard of False Flag?

LPR should have fortified themselves in the industrial area. This is going slow Mariupol style.

where is Patrick Lancaster, the independent journalist?

Trolls from US and Natostan ministry of truths have become the evil in themselves. After turning everything else to boogeyman in order to create fear and keep the Military Industrial Complex and Benjamins coming in.

The bigfoots might know how to access the purported cavern and tunnel systems on our planet that predates what’s been built by our civilization recently. Which might be part of the explanation for their ability to engage and disengage from interaction with our species.

From my super soldier studies and training. Hard light hologram technology exists on our planet that is used for segregation. To keep our species away from others that are here. Portal technology is also evidently part of the mix.

I’m experiencing delays in settling my father’s estate and am up against litigation timelines and deadlines that have to be met to continue the discovery process that is delaying resuming contact ops. It looks like a lot of money is missing from the estate and some of it in 7 figure tranches may be offshore.

Once I get it settled and also complete my transition into 6 figure income from obtaining state and federal financial licensing. I’ll be in a much stronger position to resume contact work. And have the resources to include people helping me.

The globalist “west” are fighting Russia to the last Ukrainian. The Ukrainians are idiots to allow themselves to be used for what is blatantly a planned proxy war.