Screen grab from the test video released by SSB.

In a statement, the drone’s manufacturer, the Turkish Aerospace Industries (TAI), said that the live test was carried out off the Black Sea province of Sinop at an altitude of 20,000 feet.

During the live-fire test, Aksungur struck a target located 30 kilometers away with the KGK-SIHA-82 guided glide bomb, which weighs 340 kilograms.

TAI revealed that the range will be extended to 45 kilometers in an upcoming test of the KGK-SIHA-82. The glide bomb was developed by the TÜBITAK Defense Industries Research and Development Institute, SAGE.

The Aksungur, one of the largest combat drones in the Turkish arsenal, was introduced this year. The drone has a range of 6,500 kilometers and an endurance of up to 49 hours.

Earlier this week, another large Turkish combat drone, the Bayraktar Akıncı, test-fired a similar type of glide bombs, the MAM-T. The bomb has a maximum range of 30 km and is guided by GPS as well as semi-active laser.

Turkey is developing the stand-off attack capabilities of its combat drones, likely to address more advanced threats like air-defense systems, jammers and radars.

Meanwhile, on the other side of the World the People’s Liberation Army Navy commissioned three major warships together on the same day. One, an improved Type 094 SSBN, another is the third Type 055 Heavy Guided Missile Destroyer, and finally there is the first Type 075 Helicopter Carrier/Assault Ship. That’s 60,000 tons of naval shipping introduced into operational service, all on the same day. America’s command of the sea is waning by the day.

This might happen several more times this year. Another Type 055 is scheduled to commission as is another Type 075 and as many as four Type 052DL’s. The first Type 076 is probably a long shot for 2021 but within the realm of possibility. It’s going to be a major year for the PLAN and these developments have the potential to change the geostrategic calculus of every state in the SCS region. 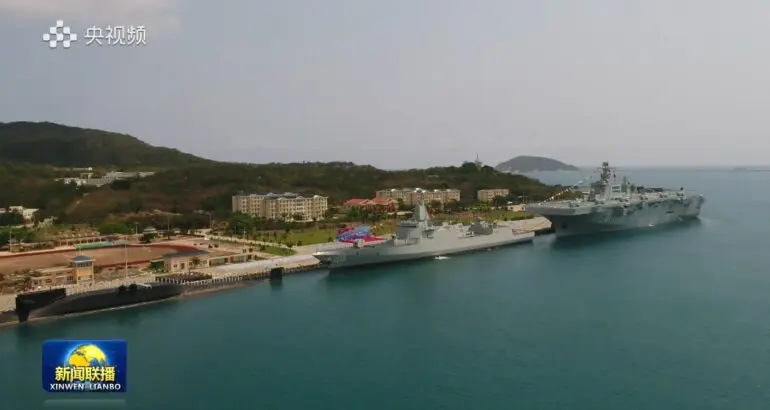 Yep, most American MSM outlets are too confused and upset to carry this story. Even naval interest webpages like SeaWaves and USNI refuse to cover it or talk about it. I went to Breitbart today and taunted the publication for covering some nobody at the Oscars praising the Hong Kong rioters but refusing to cover the introduction into active service of 60,000 tons of naval shipping on three different PLAN platforms. It’s astounding, they are so scared of the PLA that they won’t cover this major story out of fear of spooking a bunch of kids’ parents across America who pretend in their hearts that Johnny or Mary are “defending America” in the navy, but who really know better. Can’t have a bunch of family members across America calling their Congressional representatives and insisting that the U.S. Navy stay as far away from Taiwan and the SCS as possible.

I agree.
The RAND Corporation(one of the few think tanks that are actually worth their money) run a simulation about the invasion of Taiwan.
It was set in the near future, so around now…
The Chinese were equipped with long range stealth defeating radars, supersonic cruise missiles, and license built Su-27 and Su-35, they went against two carrier strike groups and the Taiwanese forces.
Long story short, in every scenario the Chinese won, only the losses varied, most cases predicted a clean win with 30% Chinese losses, 70-80% U.S. losses, and 100% Taiwanese losses.

Not the potential, but it already changed. China already has the largest number of warships in the world if it means anything and logistics alone make it happens. US has bases in Japan unless it declares neutrality and Guam. Those bases are not far from China and in fact within a stone’s throw, and will be taken out if anything happens there. Then US will be forced to defend Hawaii. Otherwise US needs to resort to nukes and then there are China, Russia and NK nukes.

No need to go after South Korea. They have already made clear that they will not permit use of their territory or bases on their territory to attack China, or any third party not engaged in hostilities against South Korea. And the PRC and South Korea have been enjoying large scale expanded trade ties.

It may be some years before China could defeat the US though in open naval warfare, even with a larger navy and more tonnage of warships etc. You have to realize that China has zero modern naval warfare experience, while the US has decades of experience and expertise learned from several conflicts. Naval warfare skill can’t be learned in just a few years either, so in an open conflict with the US, China would suffer horrendous attrition, unless, of course, Russian “experts” were to directly assist them.

I’m not sure that’s true. The PLAN stay close to China where any fight would involve Chinese Air Defenses, Missile Forces and the PLAAF. Fighting a major combat action close to the PRC would give China’s Armed Forces a considerable advantage in playing defense.
I would agree with your learning curve diagnosis if this were still the age of large Naval gunnery, etc. but this is the era of anti-ship missiles. Even Hezbollah can use an anti-ship missile to hit an Israeli warship and damage it enough to send it home. One doesn’t need much beyond practice to identify the distant location of approaching warships, provide that targeting information to missiles, and launch them from their tubes. There is some artistry in it, some sound fundamentals that need to be thought out and worked out, but one can learn these in exercises, combat not actually required. The PLAN again has the advantage in that American warships and aircraft will be coming toward them; they won’t have to go out into the broad World Ocean to find them and engage them and the PRC’s forces don’t have to assault North America in order to win.

Most likely it never comes to combat between the USA and the PRC. Just having enough firepower to beat the United States deters war and allows the PRC to achieve it’s goals in the SCS and Taiwan without firing a single missile or perhaps just fighting Taiwan, with the U.S. deciding to stay out of it because it’s too risky with China’s huge force structure. That’s the most likely outcome with this buildup and with the decline in equipment operability among U.S. Navy Warships, which are aging, wearing down due to overuse, and have seen massive delays in maintainance work at shipyards.

Thank you. I did think about your point of view and found this from the People’s Daily Online dated April 23rd, 2021 in an article titled “PLA Navy makes great strides as it turns 72”:

“Lieutenant commander Jiao Yunqiang, chief of combat operations on one of the Navy’s best submarines, said that thanks to Xi’s emphasis on combat training and the navy’s modernization endeavours , his submarine now spends a much longer time in deep ocean areas for patrols and training and has been equipped with many new weapons in recent years…In combat exercises organized by the Navy, Jiao’s submarine challenges warships and aircraft, and their confrontations were intense. ‘Such war games are very similiar to real combat. All of the involved units try their best to defeat the others, which consequently will improve our crew member skills and experience,’ Jiao added.”

Thats a rather primitive weapon.
If the drone cant enter the airspace this glide bomb wont either.
Just look at how effective Syrian air defense got.
Shlomo air force is basically shooting duds now…

They are plastic drones, so they will be downed by EW, no need to waste a missile on them

Kenny boy you are a clueless character

hahaha sure you people are not clueless

Drones dont have enough speed to launch such aerial bombs which can hit ground 30km away at that altitude.

But the Turkish drones do have the capability to launch bombs like that. Which is why you should be sitting in your pants the next time you pick a fight with Azerbaijan.
N-K taught the Turkish drone makers many lessons, and it’ll be much more difficult for Russian anti-aircraft systems to deal with future Turkish drones.
I like the 6000+ km range. It means if Turkey can successfully maintain communication with drones 6000 kilometres away, they can create military bases far out of range of any precision missile or combat aircraft. the 49-hour endurance is another plus.
Let’s see what these drones can do in any future combat – most likely in Syria or Libya.

NK army only had old SA-8 OSA which have a max altitude range of 5.000mts and TB 2 was flying at 6000 mts…therefore was easy to hit SA-8!…but only one TOR M2 deployed in Martuni shot down 2 TB2 which was trying to hunt that system!..at the end of the war only was destroyed when was hided in a Grain…

Well, well, there goes my friend again.
How do you explain then?

“We must realize that our party’s most powerful weapon is racial tensions. By propounding into the consciousness of the dark races that for centuries they have been oppressed by whites, we can mold them to the program of the Communist Party. In America we will aim for subtle victory. While inflaming the Negro minority against the whites, we will endeavor to instill in the whites a guilt complex for their exploitation of the Negroes. We will aid the Negroes to rise in prominence in every walk of life, in the professions and in the world of sports and entertainment. With this prestige, the Negro will be able to intermarry with the whites and begin a process which will deliver America to our cause.”

turkey trying to be Egypt during Nasser era….Erdogon should stop seeking counsel from tratz, jens and tommy

Aksungur 12m long 24 M wingspan and a cruising speed of 240 kph …. pretty awesome specs for a WW1 biplane. (early war anyway). So they give it a glide bomb … terrific … the one chance it has to get close to a competent enemy is to fly in low out of sight to radar and they give it a weapon that has to be released from altitude to work. It should work fine against insurgents or for security patrols but it’s certainly not going to be striking fear into military forces.

seems to be a simple precision kit for bombs