In the video [4:23], a Metis ATGM, which can be identified by the IR flare mounted on one of its unique triple fins, can be seen passing meters away from a T-72 battle tank equipped with a Sarab-2 APS.

ANNA’s journalist claimed in the video that the system is of Iranian origins. However, the Within Syria Blog had revealed that the system was developed by the Syrian Scientific Research Center (SSRC).

According to a report released by the blog in 2017, Sarab-2 APS, that’s an infrared jammer, has over 80% effectiveness against all semi-automatic command to line of sight (SACLOS) guided ATGMs, such as the Russian Metis missile seen in the video. The System has an operational time of more than 10 hours.

The introduction of the system’s first generation, known as Sarab-1, in 2015 has significantly reduced the SAA’s armour loses. Tanks equipped with different variants of the system are reportedly taking part in the ongoing military operation around Idlib.

It is an Iranian system called Saiyad (Hunter) and was first installed on all 500 plus Iranian T-72 and now is on all of Iranian Karrar striker tanks. It is similar to Russian Shtora 1. As pictured it is an
electro-optical active protection system or suite for tanks, designed to
disrupt the laser designator and laser rangefinders of incoming anti-tank guided missiles. 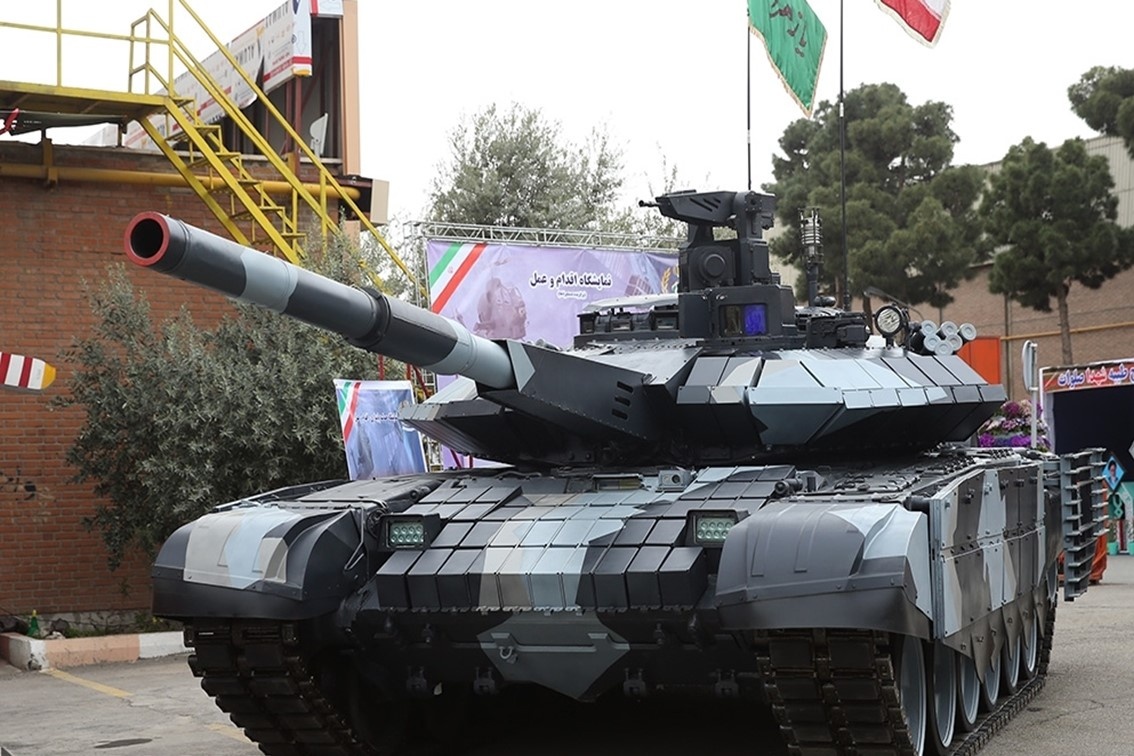 Cool… really, really cool. They should have had this 5 years ago.

always something wrong with the Syrians aint it.

This could be one of the reasons the Tomahawks and Israelis often target the SSRC scattered about, its not like they had aĺl there research in one place as the west was blaring after hitting it last year with a couple missile.

do you still believe in santa claus also?

It was expensive as Syria had a large tank inventory at the onset of the US and Zionist terror campaign in 2012, about 4, 500 tanks, mostly older T-55. And also battle test trials take time. Now Iran is in a position to install them with local Syrian production.

Yes, but they had not.

Shtora although is a laser disrupt but also confuse Tow operator fulling of red lights his optical in order to make more dificult to operate the wire saclos guide missile to the target.

very coo indeed!
However that blue glass window looks like it could be shot very easily in a hail of bullets from a machine gun! It needs more protection!

The blue glass and part of the electro-optical system and sturdier than looks. In Syria, a Russian T-90 operated by Hezbollah took a direct hit from a US TOW and came out with less damage that a shopping trolley would do in a car park. The glass is reinforced plexi and kevlar and can withstand a 50 caliber bullet at close range. 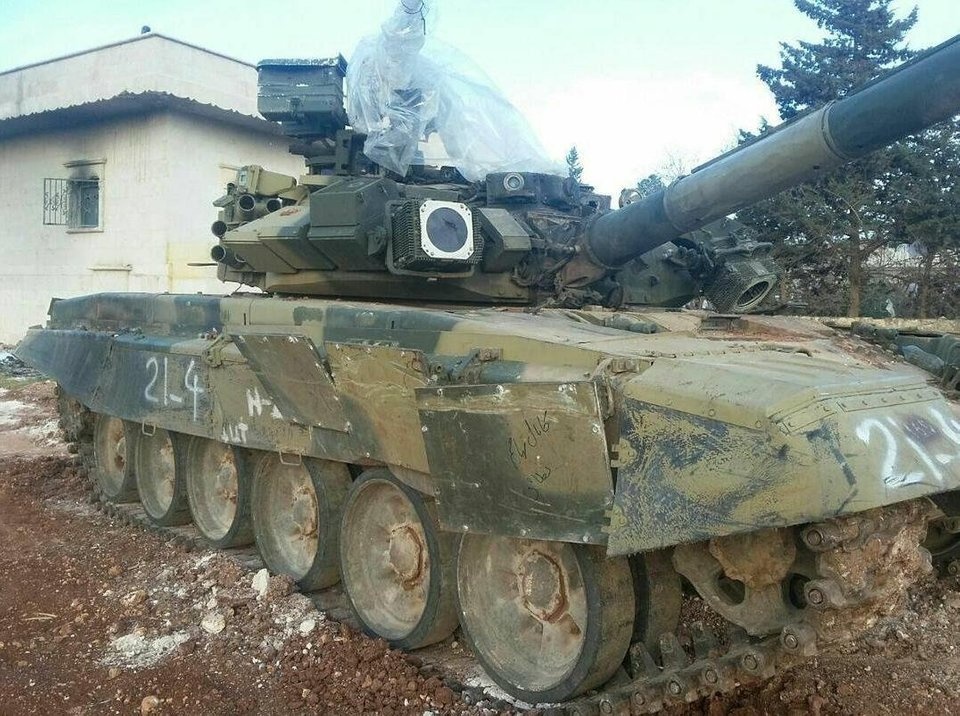 awesome info! i should have realised these things would be made tough! my bad!

Well done Sarab-2 APS. Save our heroes that fight for peace in our world against Jews.

“against Jews” – there are really peacefully minded Jews about, like Miko Peled (“The General’s Son”), Gilad Atzmon, Bte Tselem, Nekurei Karta, and many more.

What you mean is the Zionists in the government!

Iran and other countries in the world should never trust American regime. US wants non-emergency embassy staff to leave Baghdad, Erbil amid aggression on Iran.

Iran should be ready for war with America, Saudis and UAE. America have already invaded Iran with economic sanctions which is a global economic terrorism. In case of further Trump provocation Iran could give heavy stroke to American terrorists and to his terrorist state of Israel.

Believe me, Iran is quite prepared.

So you are not American anymore? What happened?

I am a native American. I don’t belong to these fake American. What they are doing in Syria, Iraq, Afghanistan. Are these their countries? No. Similarly they have stolen our land from us. They are liars, cheaters, thieves and child butchers.

Amerindians didn’t have the notion of land property so nothing was stolen from them. They are still nomads, like gypsies.

Are you pro thief. Pro child butcher and liar. Remember we will soon kick out you all dirty LGBT race from our land by the help of our rest of world.

How many accounts have you made of Discus?

But Amerindians didn’t invented land property, they have stolen this notion from the whites.

Sorry you are lunatic. Reply to you is waste of time.

amerindians, same as africans have access to vaccines, meds, alphabetization, real food (not human flesh) because of the the whites. Ohhh I forgot the Internet.

u predict this because u think Iran will make a move in 2019?
i actually believe the USA will provoke iran to make a move and then blame the iranian move as aggression!

I also believe that the USA provoking Iran is more about China than it is about Iran!
i believe there is already a cold economic war happening between China and the USA, not to mention a cyber war and an intel war!

I think this trade war the USA is having with China is related! If China is not getting the oil it needs, production costs sky rocket! Only the USA and Russia will sell oil and the price of oil will go up! This will greatly hurt China and benefit america! Russia will benefit too and that means Russia will stay out of it!

I also think this is why the USA is meddling in Venez! They can stop Venez from shipping oil to china! They are killing 2 birds with one stone! Their perceived iranian problem and the China problem!

They prefer to screw with Iran than to screw with China! But hurting iran hurts china greatly! China will not get involved because in reality, they are not confident war fighters! No experience and not enough years have passed for them to be equal to the USA! Russia will stay out for sure! Russia will benefit greatly when the cost of gas and oil go up! In fact, russia may benefit the most! They do nothing against nobody yet benefit from the outcome!

i believe such a deal has been made!
i think China is more of a threat to Russia than anyone else!

too bad israel didn’t have this thing when they invaded lebanon in 2006.

A lot has happend since 2006 both ways mainly by IT.

try updating your algorithms to include irony and sarcasm, flathead.

Iran should keep eyes thoroughly on regional aerospace and on sea and don’t miss any target AC carriers, navy vessels, military/terrorists bases, energy and economic zones in KSA, UAE, QATAR and Israel etc and missiles and other toys from the air. God protect Iran. Ameen

Iran already do that. They are not as stupid asyiu think, The other way too.

Increase the dosage of captagone. Have a nice day.

Jens is not playing with a full deck and is a few sandwiches short of a major asylum picnic :)

Jens, you have me worried.
Your literature is the same but it seems someone turned a knob and put you on another station. What happened? A piano? Walked under a ladder?

To my horror when I looked at your comments on this page, you talk sense which is very strange! I hope your “condition” is reversible, we will miss your old self, I fear.

I am up and down and sometimes too busy doing all as well as I can.

An Tank is like an battle plain, an platform, of course armed, but this must be noted the increasing ability to utelyse, range, in all spectrums, and to counter it, or by pass it, and this Iranian/Russian isnt dripping new, but it seems like they managed to make it work, its not labratory conditions, an tank is something else.

This latest drivel about sabotage, is already passed hillarious to the realms of idiocy, when this ugh…. holes are somehow prof of explosions, because of what, an hole, witch by the baffling logic the PentaGooons can show to, and explain that, only on floating devices as this f….. big boats, or anyboat, be done thru the hull with the use of an uh….. torpedo, or?.
Not, uh….. Mother earth, you know, the ground, or other idiots stearing something that uses kilometers to even stop.

Warning: Zio-Run USA soon likely to stage false flag and start war against Iran in the Middle East. Guess where they got their “Intel” from that purports to warn about potential IRGC attacks? Israhell. Yes that’s right, Pissrael.

Its either trump fires Bolton, or where going to war.

I vote for your fired, treasonous son of a bitch and shot on the spot.

Maybee. Trump is not to rely on. I never do unless its visible.

Getting information is done by many sources. Of course Israel is a very good local one for real things as well as fakes.

But its also well known, that wrong things too often reduce the friendships a lot.

How do they know if the ATGM was in fact deflected instead of simply missing the target?

I am sure it has been hard work to make an antisystem as this. Of course deflecting is a safety version as well.

This is useless against the latest guidance systems .

actually its even better since fire and forget systems use IR laser to tag the target.

Thats not the point The point is if its better then the systems the enimes has or has not.

Missiles targeting Dimoana nuclear facility have been locked and loaded. In the event of an armed conflict maybe a coordinated offensive with Hezbollah using their 1000 missiles to overwhelm iron dome then within a few minutes Iranian cruise missiles launched to attack key Israeli infrastructure including Dimoana and tel aviv airport, desalination plants and military bases.