The pro-Iranian group Saraya Awliyat Al-Dam (Custodians of the Blood) shared a video of the attack on the logistics convoy of the US-led international coalition, which was carried out on January 16.

On January 16, a U.S. logistical convoy was targeted by an IED attack in the Basrah province.

According to the group, five side-hitting mines were used in the attack.

Saraya Awil’a al-Dam is one of several pro-Iranian groups which were established following the assassination of Abu Mahdi al-Muhandis, Deputy-Commander of the Popular Mobilization Units, and Iran’s Quds Force Commander Maj. Gen. Qassim Soleimani on 3 January 2020. The group’s cells are attacking US supply convoys in different parts of Iraq. 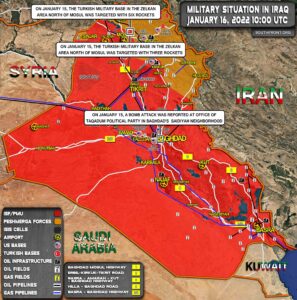 Ukraine On The Verge Of Debt Collapse

Problem is they are Iraqi idiots driving the trucks.

Well, those should technically count as traitors to these guys anyway so I doubt they are too cut up about blowing them up.

Yes, its outsourced and mainly to the locals.

Its also a reason for the USA military forces looks smaller, then they are.

Absolutely nothing to see, as usual ^^