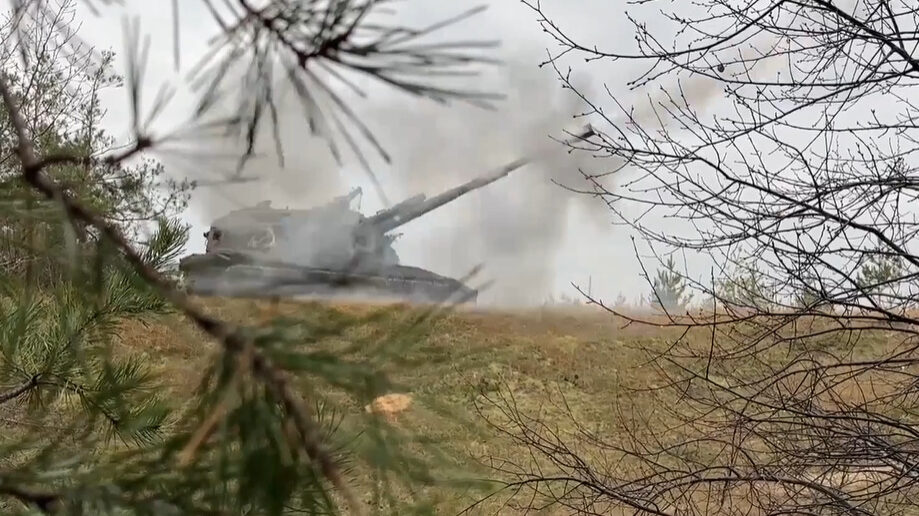 A Russian Msta-SM2 firing. Screengrab via the Russian Ministry of Defense.

“The tactic of roving guns enables artillery squads to conduct a counter-fire maneuver after accomplishing a firing mission and leave the site as soon as possible for another fire emplacement where they can direct the gun and wipe out a new enemy target after getting target acquisition data from reconnaissance units and drone teams,” the ministry said in a commentary to the video.

The Msta-SM2, the latest version of the original Msta-S, has a maximum firing range of 29 kilometers. It can also fire the laser-guided 2K25 Krasnopol round, which has a range of 20-25 kilometers. The modernized howitzer, which is equipped with an automatic fire control system and a digital navigation system, can fire up to ten rounds per minute.

The tracked chassis of the Msta-SM2 uses many components of the T-72 and T-80 battle tanks. It is powered by a rear-mounted V-84A diesel engine, developing 840 hp.

Around 760 Mata-S and SM2 howitzers are reportedly in active service with the Russian military, more than 200 others are kept in storage. Russian defense manufacturer Uraltransmash is currently mass producing the Msta-SM2.

The United States and its NATO allies have supplied Ukraine with around 350 howitzers and dozens of counter-battery radars since the start of the Russian special military operation. Despite of this massive support, Kiev forces are still struggling in the face of Russian artillery.

Get them all, the dirty Nazis

Many Nazis already killed, but still there are too much of them on the face of the earth! NATO can’t save them, they are doomed.

They are not Nazis, they are agents of oligarchs instead of working for the people – the opposite of what the original Nazis did.

You are retarded. You and the rest of the world would be well-served if you stepped in front of a bus moving at a good clip.

Russia still fighting with 1% of her might, squashing the Nazy scum with one nail and that with reluctance…

Russia should use RAGE and incinerate all the disgusting vermin at once!

GUSTAVO
Reply to  USA is a shithole, EU is becoming one

You will see the 10% of mighty Russia force this coming Russia offensive.

USA is a shithole, EU is becoming one
Reply to  GUSTAVO

This warmongering NATO scum must be incinerated.

let me translate this: Slava Rusiji :)

As my uncle always told me, never to fk with the Russian. They are fearless in battles and will fight till the very end. 28 million Russian didnt died for nothing Ukraine and NATO playing a dangerous game to fk with Russia like that. It’s not just Russian that supported Russia, it’s more than half of the world supporting and cheering for Russia. You know youre fked and there will never be any support for Ukraine, when a Vietnam war Veteran says this Youtube: Im a US Navy Vietnam Veteran and I support Russia and Putin 100%. My two brothers, a Marine and an Airforce Viet, are also against dictator Zelensky – Lee

USA is a shithole, EU is becoming one
Reply to  NATO = North Atlantic Terrorist Organization

The deep state of USA fucked Russia, European people and Asia all this time.

We know it and we want REVENGE to stop this once and for all. Russia was way too merciful and now the Russian people is paying the price. European people are squashed under the tyranny of beaurocracy. We need FREEDOM, PEACE AND JUSTICE. And that means Nazy dead, all of them, from all sides of the both Oceans….

Most americans thinks so but they can’t vote. Only dead felons trannies and illegals can.

burn kiev to the ground! And if it’s no enough kharkov as well. The west don’t understand other language. Anytime you hesitate they think you are weak or afraid. They understand just violence. Remember Bagdad, Tripoli, Aleppo

Not kharkov. Just like Riad is the heart of the salafist islamic terror ideology. The heart of the banderist nazi ideology is in lvov and ivanofrankivsk. Make a burning line from north to south at the western border of ukraine to poland.

The Russian’s sure love their artillery.

Looks similar to the Panzerhaubitze 2000, a bit smaller probably sturdier and cheaper and probably a bit less capable but the sturdiness and cost and numbers deployed can make up for the difference. The Pzhaubitze 2000s were breaking down from too many shells fired in Ukrainian service they need far more frequent servicing and less intense use, more rotation in and out and more replacement on parts. https://armedforces.eu/compare/self-propelled_artillery_2S19_Msta_vs_Panzerhaubitze_2000 Russia has 760 in service vs the 22 delivered to Ukraine that are now withdrawn (to Slovakia?) for servicing … Germany is not happy about sending its latest tech into Ukraine.

I’m surprised that the Incompetent Russians even know how to fire that Howitzer!

ZZZ
Reply to  Ghost of Moscow

You will have ghost! Satanists like you go to nothing. You’ll discover very soon.

Roving the gun is important to avoid counterattacks. Everyone knows since the beginning. If they used their howitzers static before please fire the incompetent commander. A lot of losses could easily be avoided!

USA is a shithole, EU is becoming one
Reply to  AliG

And maybe they should have used them in groups, not one by one. This way a single shot from 6, 8 guns could achieve the same result as a gun sitting for 1 minute to shoot. Much more mobility, less time to be attacked.

Power to the Great Russian Motherland!