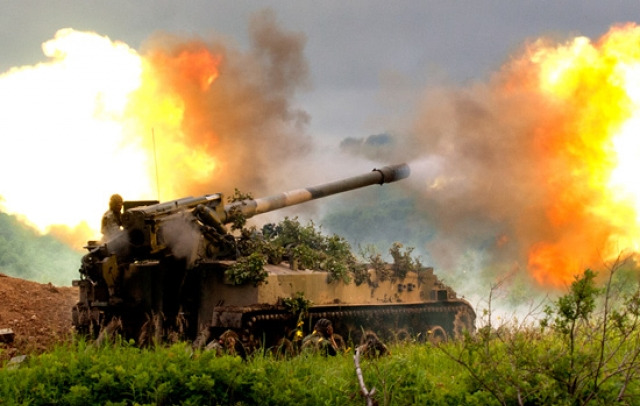 The Missile Troops and Artillery of the Russian Armed Forces continue to hammer Kiev forces across the frontlines in the Donbass region.

On May 22, RIA Novosti released a video report showing a Russian battery of 2S5 Giatsint-S 152 mm self-propelled howitzers hammering positions of Kiev forces in an unspecified part of Luhansk.

The Giatsint-S is built around a chassis modified from the SA-4 Krug surface-to-air missile system with good cross-country mobility. The howitzer’s 2A36 152 mm gun can sustain a rate of fire of five to six rounds per minute.

The howitzer can carry 30 152 mm rounds with a range of 28 kilometers, or 33-40 kilometers for rocket-assisted projectiles. In addition to high explosives, the gun can also fire HEAT [high-explosive anti-tank], cluster, smoke and even nuclear projectiles.

The Giatsint-S can also fire the Centimeter and Krasnopol laser guided rounds with the range of 12 and 20 kilometers, respectively. 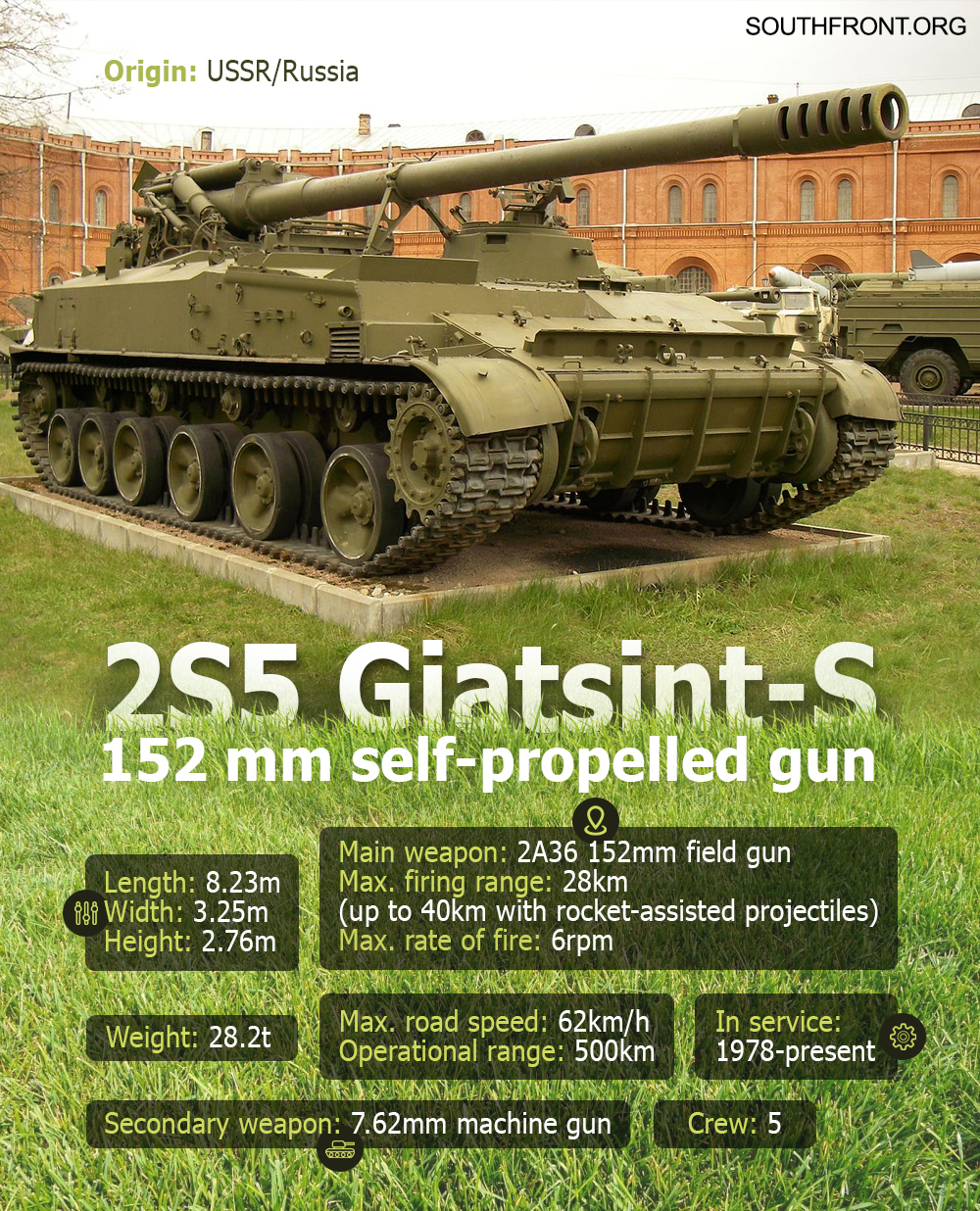 The commander of the battery filmed by RIA Novosti praised the high accuracy of the Giatsint-S. He also explained to the news agency how his battery avoids being detected or targeted by Kiev forces by redeploying after each round of shelling.

The Russian Missile Troops and Artillery have been playing a key role in the Russian special military operation since its beginning. The force inflicted some heavy human and material losses on Kiev forces in Donbass over the last few weeks, allowing Russian troops and their allies to advance in the region more rapidly.

You sound like a western merc, 100 were raped by kalibrs today

2S4_Tyulpan is a Self-propelled MORTAR, not a HOWITZER therefore it is a different kettle of fish. 😊

I make more then 12,000DLR a month online. It’s enough to comfortably replace my old jobs income, especially considering I only work about 11 to 12 hours a week from home. I was amazed how easy it was after I tried it…….. 𝐖𝐰𝐰.𝐁𝐮𝐳𝐳𝐉𝐨𝐢𝐧.𝐜𝐨𝐦

Did you see it or was it told to you? SILLY.

I didn’t see that, but I did see an Iskander turn a medium-sized building to dust with a high-level Ukronazi commando inside.

I like what I see in the video above, powerful stuff. However, I’m not so sure the Ukes like it as much as I do. In any case it is now time to surrender and go back home to your families, before this goes from bad to worse for you. This war is lost for you, which is a good thing because if you lose, that actually means that you are liberated from evil and thus also free men living in a free country.

Save some shells for Galicia where Bandera monsters are born and taught to hate. DeNazify Galicia with thorough skill.

Winston Churchill (1944): ”I have left the obvious, essential fact to this point, namely, that it is the Russian Armies who have done the main work in tearing the guts out of the German army.”

The only true thing Winston Churchill ever said

“I had a feeling once about Mathematics, that I saw it all –– Depth beyond depth was revealed to me –– the Byss and the Abyss. I saw, as one might see the transit of Venus –– or even the Lord Mayor’s show, a quantity passing through infinity and changing its sign from plus to minus. I saw exactly how it happened and why the tergiversation was inevitable; and how the one step involved all the others. It was like politics. But it was after dinner and I let it go!”

Just let Poland get stuck with them.

Amen! The Ukies need to get on with life if they want to keep it. They are done !

Kiev forces in Donbas? Nice expression. But, the correct expression is the Ukrainian forces. So, can we say Putin’s forces in Ukraine? Or is it forbidden, like it is forbidden to say war in Ukraina.

Vlad the Imposter
Reply to  Cop

The correct expression is ‘useful idiots willing to die for the stock portfolios of investors in US MIC’ .

And they’re defending a part of Russia that fell into the laps of a herd of cast off serfs who used to belong to the Hapsbergs in 1990 which is populated by people who were Russian until 1990 and want to be Russian again and are willing to fight and die to get them to leave.

This is actually a gun, cannon, not really howitzer. It does have some elevation, but not as much as howitzer have, and muzzle velocity is way higher than those in howitzers.

No way videos can let us know just how loud this sucker is, or the smells. Gotta be a lot of hearing loss by all involved. This conflict is certainly providing a testing ground for all sorts of new and old weaponry. Some designers will be promoted, others demoted.

Now that’s what I call one helluva “Brute” of a gun barrel!…

We have rapid developments in Donbas when the Russian forces entered the previously invincible stronghold of the Ukrainians, in the city of Avdiika. Ukrainian sources speak of a nightmare with the city shaking from shelling.

Russian artillery has been shelling relentlessly for hours while fires have broken out in various places. Ukrainians talk about the worst night since the 2014 war!

The video shows the Russians hitting the Ukrainian positions with TOS-1.

The 1st Donetsk Brigade is reported to have entered the city, where heavy fighting is taking place in several districts. There are dozens of dead.

Yesterday, WarNews247 revealed that the Russians were asking the Ukrainians to surrender to Avdiika. Today it seems that they launched a terrifying attack on the city.

Rapid forward movement on the part of Russia will start occurring as soon as they are past the Adriviika trench systems. 8 years of entrenchment and micro armament war just got Belgium’ed at the Maginot line. Not the brightest bunch ukrops.

I see a huge problem for the advancement of Russia and LPR in those tens of thousands of small and medium constructions, (which seem clearly illegal), because they appear in a chaotic and massive way, along roads and in any location. It is a symbol of post-Soviet lawless regimes like Ukraine, where I saw it with my eyes in Odessa and Arcadia. Those constructions are like the jungle, perfect territories for ambushes and enemy traps

It would be wonderful to be able to destroy them with aerial carpet bombing, you win triple, clear the way, kill the cockroaches and rearrange the territory.