Russian forces have started deployment near the Turkish observation post encircled by the Syrian Army in northern Hama. The post is located near the town of Murak recently liberated by government forces.

After the collapse of militants’ defense in the Khan Shaykhun countryside, Turkish troops deployed on the Murak post appeared to be fully encircled by Syrian forces. Most likely, the Russians came there to rescure the Turks from warm greetings of the Syrian military that knows well about Ankara’s efforts to support radical militants in the area.

Russia will protect the poor little Turks from the SAA. Let’s hope they pull them all out now.

It is also a refuge for any favoured Turkish terrorists who are left in the pocket.

The Russian deployment hinders that as well as protecting the base from organised Turkish False flag attacks on their own base in order to seek political advantage over Russia.

It could also be that the Turks are reluctant to abandon the base due to large quantities of heavy equipment and munitions that cannot reasonably be taken out by helicopters.

They will probably be allowed to leave with their weapons under Russian MP supervision/protection. This type of thing will be negotiated by high ranking officers just as it was in Crimea when Ukrainian military were besieged in their bases and ships. As for the turks, they are running out of water and food as we speak. Shouldnt be too much longer. Big propaganda loss for the turks and soldier moral

It does free up the SAA units that have more pressing matters to attend to plus gives Assad and Putin a chance to disgrace Erdogan in front of the extremists and his FSA proxies by busing out the Turk soldiers with no weapons or equipment and just their personal belongings.

ruca
Reply to  klove and light

Put your brain in gear before you type

Don’t ask too much. Poor thing is working hard to earn his 30 sheckels.

Check this out TM.

Hey the SAA has more important terrorist to fry in Idlib, before dealing with bunch of hapless Turkish post. Let the Russians contain them, while the SAA finish them in Idlib, when done then the stupid Turks can get their marching orders to leave. Otherwise STFU.

Of course, and main objective is to prevent pretext for use of Turkish army en masse.

The still image shows , as we have always known, that OP T-9 is far from a mere, passive Observation Post but in reality a massive fortified base (with overhead protection, HL pad,munitions depot etc..) 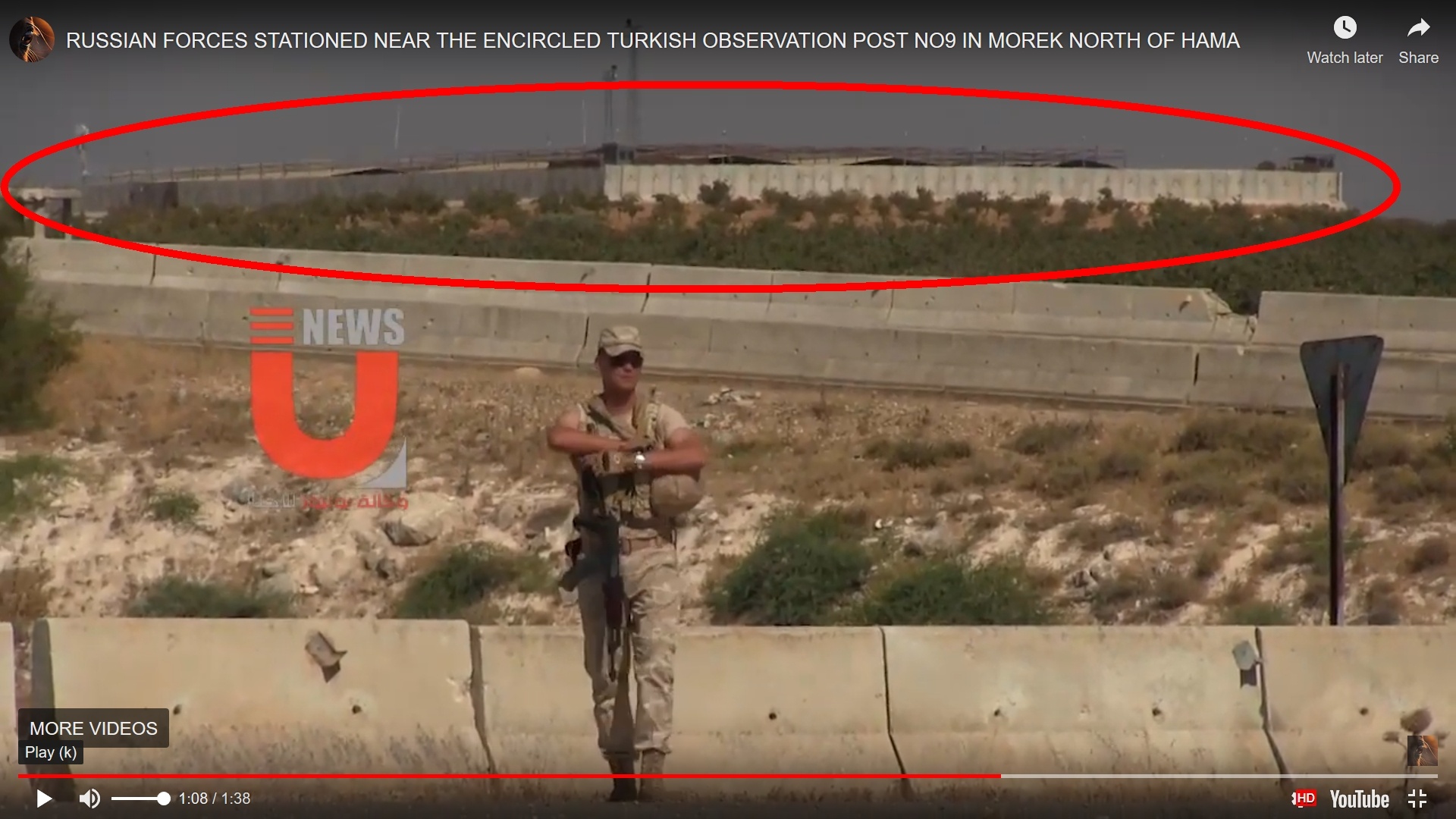 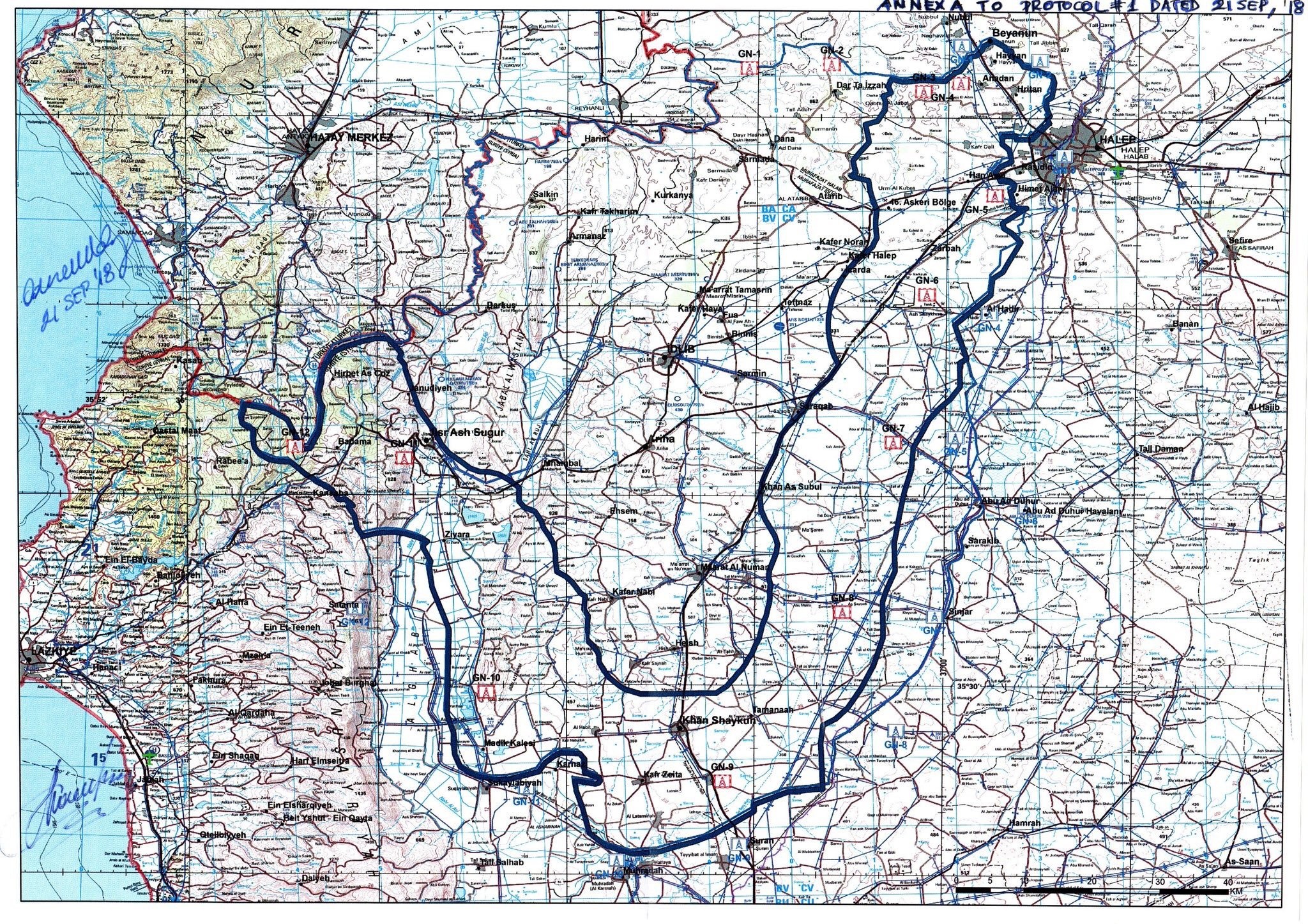 which provided DIRECT support and protection to Jaysh al-Izza and HTS. By agreement Sochi accords (Sept 2018) and Astana protocols (see map) Turkey deploys 12 , of which T-10, 11, 12 to the north-west are similar large fortified bases. T-9 can be supplied by helicopter or convoys with Russian escorts.

“Massive fortified base”, is on the money.
It will make a nice SAA base now, to keep an eye on any Hama ‘left overs’.

When Russia agreed to sell Turkey the S400 you knew that their motives toward Syria were disingenuous.

That’s why Russia sold them the S400, it has splintered NATO, the main backers of ISIS.

Absolutely… it pried them away from our nexus… It was brilliant, they are painting us out of the room…

Does it hurt seeing your terrorist friends being desintegrated? Does it hurt seeing Russia playing major role in helping Syrians liberate themselves while ripping Turkey out of NATO? Tough times, huh? I feel your pain. You can keep spreading nonsense but facts are telling the true story – anglo-zio empire is starting to fall and this will only accelerate from now on.

the true story – anglo-zio empire is starting to fall….its going to be messy… I want a sailboat to live in the Caribbean/Vietnam/Thailand…

“Does it hurt seeing your terrorist friends…”
LOL. You are an effing moron.

I feel your pain :) Feel sorry for you, creature.

Better to have Turkey on ones side, if for no other reason, that little matter of the Dardanelles. No sea supply w/o, and Idlib is being retaken I see despite the Turkish view.

Well somebody must have requested an escort. lol

Good move. Anything to avoid giving the Turks a “reason” to attack the SAA and mess up the next phase of the Idlib operations is crucial.
Turkey will be gone from Idlib anyway, at least when all other parts are liberated, and their posts are all isolated.
Its all a charade, Erdogan has long had to accept he must priotize, and that means focusing on what is essential and existential for Turkey: The Kurds.
Everything else is just for internal Turkish PR reasons.

Russia needs to set up a camp so close to the Turks they can reach out and touch them, literally. So much in their personal space they can’t turn around without bumping into each other.

Exactly, the Russians will keep them contained freeing SAA manpower to continue the push to Idlib.

Plus it would be awkward and uncomfortable… sharing a common wall where at dinner a Russian soldier could say in a mild voice, “Hey Turk dude pass the salt please”.

I think the Russians are there to stop the SAA attacking the Turks, but I also think they’re there to stop the Turks attacking the SAA too. So in fact the Russians have now become the observers at the OB post, so hopefully they’ll turn a blind eye whenever the SAA lobs a mortar or two the Turks way, the same way the Turks turned a blind eye whenever their rebel/terrorist buddies did the same thing to the SAA.

“After the collapse of militants’ defense in the Khan Shaykhun countryside, Turkish troops deployed on the Murak post appeared to be fully encircled by Syrian forces. Most likely, the Russians came there to rescue the Turks from warm greetings of the Syrian military that knows well about Ankara’s efforts to support radical militants in the area.”

Nothing more, nothing less – only love ..